Locals cool themselves with water on a hot summer day at the Dussehra Ghat behind the Taj Mahal in Agra on April 25, 2022. (PTI Photo)

The all-India temperature for April was fourth-highest at 35.05 degree Celsius since 1901, the IMD said, cautioning that the situation may not change for north-western and central states in May

India’s battle with heatwave continues to rage on. After a record-breaking heatwave in March, the country bore the brunt of yet another scorching period in April, recording the fourth highest average maximum temperatures in history.

Large parts of India, stretching from Jammu and Kashmir to Punjab, Ladakh, Haryana, Chandigarh, Delhi, Uttarakhand, Himachal Pradesh, and Rajasthan, Gujarat along with Madhya Pradesh and Chhattisgarh experienced the hottest April in over 122 years.

As per the India Meteorological Department, the average maximum temperature in April was recorded to be the highest-ever at 37.78 degree Celsius for central India, while it stood at 35.9 degrees for northwest India, nearly 3.35 degrees above normal. The all-India temperature was fourth-highest at 35.05 degree Celsius since 1901.

The country saw the warmest Aprils in 1973, 2010 and 2016 when the mercury sizzled at record highs. 2010 was, in fact, the last time the country saw the most severe and highest number of heatwaves, taking a massive toll on people. This year, too, summers have thrown a humungous challenge at the country, compounded by coal shortage and power outages.

“The maximum temperatures were significantly higher across the country, especially for northwest India, and a number of hot days and heatwaves were realized. The rains have been scanty, and most western disturbances that impacted the region have been dry, and they moved northwards in upper regions of Himalayas, without impacting the plains,” said M Mohapatra, director-general of IMD on Saturday.

Where are the Rains?

According to the weather department, western disturbances which are traditionally the main source of rainfall during this period, have been largely dry. Out of the six western disturbances that impacted the Himalayan region in April, all except one that hit last week were dry and feeble.

Elaborating on the reasons, Mohapatra said this may be because of the prevailing global conditions. “These are extra tropical weather systems, which draw their energy from horizontal temperature gradient between north and south. If this temperature gradient is high, then western disturbances becomes more effective, but if it is low, then the systems will be weak too.” 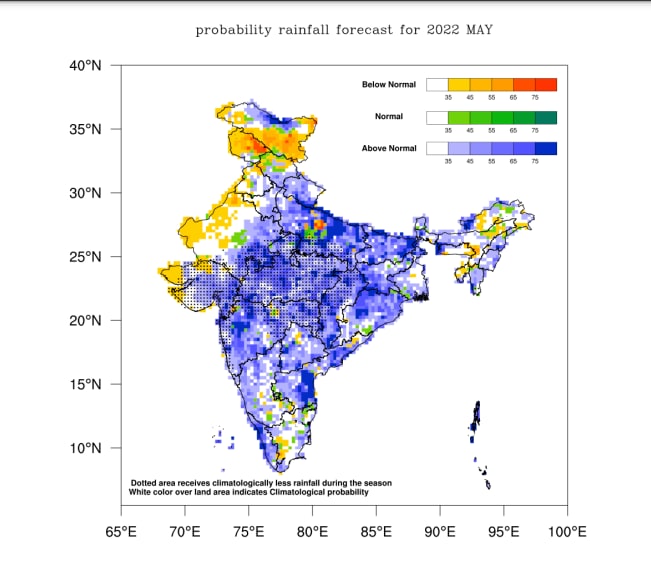 “This year the same thing happened. Though these systems formed in usual numbers, the temperature gradient in the extra-tropical region was so weak, that very few of these systems impacted the plains,” he added.

The ones which impacted the plains mostly brought dust storms and gusty winds which gave only slight relief, and abated the heatwaves briefly.

The ongoing period of sweltering heat has also raised concerns over the weather in May, which is actually the peak summer season. According to the weather department, the scenario may not change much for north-western and central states, which will continue to witness above normal temperatures, with thunderstorms and dust storms in between.

However, the scenario will be better for the country as a whole, with normal to above normal temperatures due to large differences in the weather scenario geographically. While north India has been devoid of rains, north-eastern and southern states have seen excess rains to the tune of nearly 38-40%.

The current forecast suggests that with the exception of northwest and central India, and some parts of north-eastern states, the rainfall activity will be above normal for rest of the country. This will limit the temperature rise. As per the long period average, the normal rainfall for May is 61.4 mm. 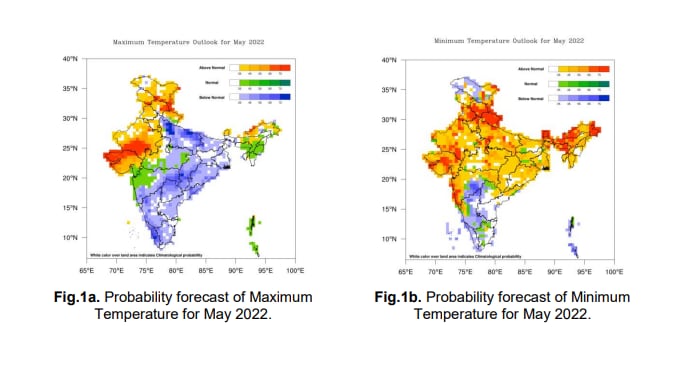 But the rains are also likely to bring no good news for Punjab, Haryana, Delhi or Rajasthan where rain showers will be below normal and dry spell may continue.

According to meteorologists, cooler waters over the equatorial Pacific – a condition called La Nina — is also not playing a dominant role. “Though we do observe low instances and severity of heatwaves during La Nina, which is active currently, but this year, it is not the case and other factors are playing a more dominant role,” said the IMD DG.