Nirmala Sitharaman Interview: 'Giving Cash Support to Poor Not the Only Solution, No One Could Have Been Wiser to Migrant Crisis'

The minister said it was the fear of contracting coronavirus that contributed to migrant workers leaving cities.

Finance minister Nirmala Sitharaman on Wednesday rebutted criticism that the Centre should have opted for more cash support in its Covid-19 relief package and said giving cash was not the only solution.

“For helping the poor, 'it cannot just be that we demanded direct money from the Centre, we got it.’ That’s not the only solution,” Sitahraman told News18 in an exclusive interview three days after announcing the fifth and final tranche of the Rs 20 lakh crore AtmaNirbhar package.

Sitharaman said she heard all the arguments for putting direct money in the hands of people to stimulate demand from economists and other observers, but said the government decided to take the alternative route because it believes proving liquidity to companies would have a cascading effect and eventually result in more people benefitting.

The finance minister said that the government after first announcing the lockdown in March had come out with a relief package that involved cash handouts for some sections and extra food grains for the poor to help them sustain in this period, but the second stimulus package needed to be more comprehensive.

The government’s economic package focused majorly on easy loan schemes, more funds for a rural job-guarantee programme, and a slew of long-awaited policy reforms across sectors, but critics have questioned the limited amount of actual government spending in this stimulus.

A breakdown of the rescue plan shows that the actual spending of the government is only about a tenth of the Rs 20 lakh crore package, which Modi had hailed as 10% of India's gross domestic product in line with the big stimulus plans announced by other major economies. 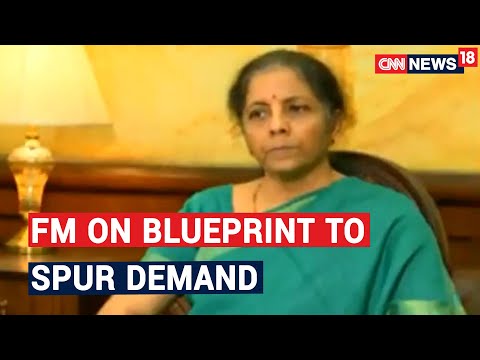 The package, critics say, will fall short of mitigating the near-term challenges for the poor, especially migrant workers, lakhs of whom have left cities and have walked back to their rural homes after losing work and savings.

On being asked about relief measures for the migrants, Sitharaman said state disaster relief funds have been used to address immediate needs and to keep them at safe places in camps. “States dealt with it at ground level, and therefore, it is states that have better idea of the situation and where they are holding them,” she said.

The minister said it was the fear of contracting coronavirus that contributed to migrant workers leaving cities.

“It is a traumatic experience they have been going through. By the time the trains were arranged for them, they had made up their mind that come what may, they will go back. I’m sorry to say but no one can be wiser to this,” she told News18.

She said that all of us, including government and civil society, are equally responsible in helping migrants overcome this emotional trauma, and said this is not the time for political finger-pointing.

“The Opposition thought they could score a brownie point but came out looking completely hypocritical,” she said, referring to the opposition parties accusing the Centre of ignoring the plight of migrants.

“They (Congress) could have first taken care of situation in the Congress-ruled states,” she said.

When asked how the reverse migration will affect the economy as industries look to reopen after the lockdown, Sitharaman said it was the responsibility of the Centre, states, local bodies, to now maintain records and database of who was coming from where and what skillset they bring.

“It is absolutely a matter of concern that there are gaps in this information. We owe it to migrants to have better information flow,” she added.