People display placards as they take part in a protest against the Kathua rape case in New Delhi. (PTI Photo)

The protestors demanded immediate dismissal of the Yogi Adityanath government in Uttar Pradesh for allegedly shielding his party legislator Kuldeep Singh Sengar, accused of raping a 17-year-old girl who had gone to his residence seeking a job.

New Delhi: Massive protests were organised across the country under "Not In My Name" campaign to demand justice for victims of Kathua and Unnao rape cases as another sexual assault on an 11-year-old girl was reported on Sunday in Gujarat, the latest in a string of cases that have sparked protests.

In Thiruvananthapuram, protesters formed a human chain, while in Mumbai, hundreds, including film celebrities, called for death penalty for rapists. In Delhi, the protesters marched down Parliament Street and called for rape trials to be completed in six months. In Surat, where the latest case took place, men and women held a silent candlelight march. 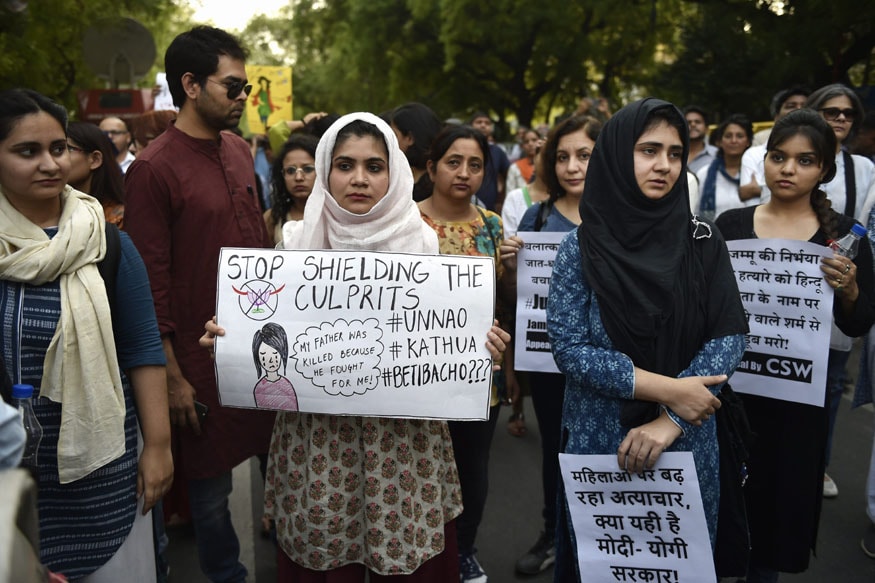 People display placards as they take part in 'Not In My Name' protest against the recent incidents of rapes, at Parliament Street in New Delhi on Sunday. (PTI Photo)

The protest comes as two incidents of rape in Jammu and Kashmir and in Uttar Pradesh provoked outrage across India. Several similar protests have been organised over the past week to demand justice to the victims of the two cases.

The protestors demanded immediate dismissal of the Yogi Adityanath government in Uttar Pradesh for allegedly shielding his party legislator Kuldeep Singh Sengar, accused of raping a 17-year-old girl who had gone to his residence seeking a job. A woman holds a placard as she participates in a protest against the rapes in Mumbai on April 15, 2018. (Photo: Reuters/Danish Siddiqui)

After the matter came to light when the victim tried to immolate herself outside Adityanath's residence in Lucknow on April 8 alleging police inaction for nearly a year, criticism against the state government has mounted.

On April 9, her father died in judicial custody, with the autopsy report suggesting serious injuries on his body.

The case has been handed over to the CBI and Sengar was on Saturday and sent to seven-day CBI custody. The participants at the "Not In My Name" protest also sought immediate arrest of the two BJP ministers, who led rallies of Hindu Ekta Manch in Kathua on March 1 in support of the accused in the rape and killing of an eight-year-old girl.

The girl's body was found a week after she disappeared from near home in January. The police has arrested a caretaker of a temple and alleged he was the mastermind behind the kidnapping, rape and killing of the girl from a nomadic tribe. A girl holds a placard during a protest in Kochi on April 15, 2018. (Photo: Reuters/Sivaram V)

The police claimed the motive behind the crime was to terrify the nomadic community and drive it out of the village.