On May 7, a state government communique said that the MGNREGS has offered work to 14.64 lakh labourers across the state. (Photo: News18)

The labourers from Madhya Pradesh, who usually migrate to states like Maharashtra and Delhi have been hit hard due to the lockdown as the closure of commercial activities forced them to return empty-handed.

With labourers coming back to Madhya Pradesh in droves after the coronavirus lockdown dried up jobs, the Shivraj Chouhan government has decided to fall back on the Mahatma Gandhi National Rural Employment Guarantee Scheme (MGNREGS), an ambitious yet controversial employment guarantee programme of the UPA era riddled with corruption and anomalies, to take care of its workers.

According to the state’s publicity department, over 1.55 lakh labourers have returned to MP from other states by May 9, which in itself describes the ‘shoddy’ implementation of MGNREGS in the central Indian state, believe many volunteers, alleging that labourers had slowly but steadily lost faith in this vital scheme due to low wages — which, at times, took almost a year to arrive.

However, the labourers who usually migrate to states like Maharashtra, Delhi, Punjab, Rajasthan, UP and Goa in search of good wages have been hit hard due to the lockdown as the closure of commercial activities forced them to return — mostly empty-handed — and by the time they reached home, agricultural work also concluded, leaving them in the lurch.

Aware of the gravity of the situation, the MP government offered three-month ration and Rs 1,000 per labourer as interim relief and started MGNREGS works in districts, mostly in the first week of May.

However, in most of the districts, except for a few gram panchayat, others are yet to see commencement of work, mostly in water conservation.

Although the state government has ensured safety measures, including masks and sanitisers at workplaces, labourers are apprehensive as many of them are also engaged in pre-monsoon preparations at home and farms. This is also affecting strength at workplaces and the government officials are trying to complete works with lesser numbers of labourers, an officer of state government said.

On May 7, a state government communique said that the MGNREGS has offered work to 14.64 lakh labourers across the state. Interacting with labourers on video conference on the same day, Shivraj Chouhan claimed, “Every needy will be offered work and job cards will be prepared on the basis of requirement.” Over 1.31 lakh works are underway, Chouhan said. 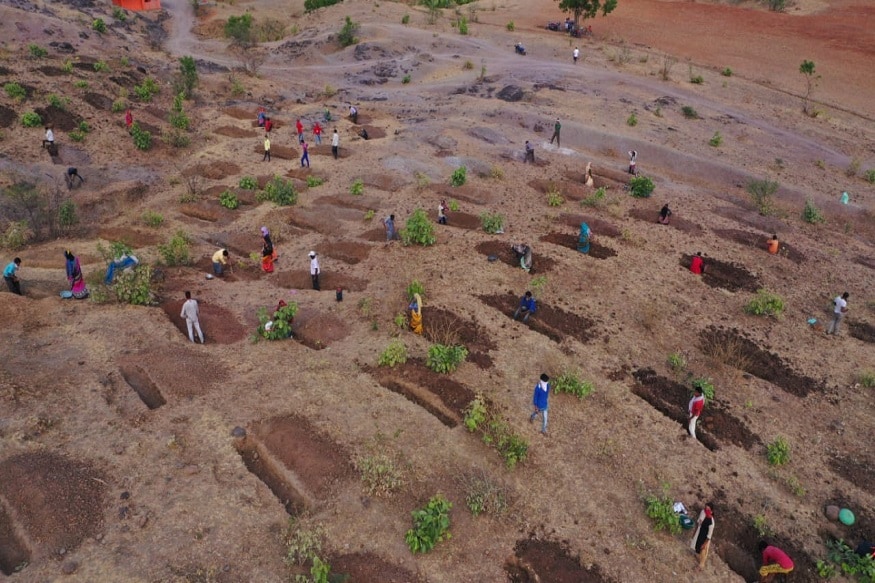 “At times fewer labourers complete the task, so the figure can’t be directly converted into man-days,” said an officer from Panchayat and Rural Development department.

This department had on paper had initiated these works since April 20 in over 22,000 gram panchayat.

Chouhan has issued instructions to initiate these works in all the districts except for red zone areas. MP Rural Livelihood Mission is also offering employment to rural women by letting them make masks, sanitisers, hand soaps and PPE kits at home through self-help groups.

During a conversation with Chouhan, Hanuman Kumar of Chhindwara had said that a pond construction in Tamia block has given jobs to 484 local men. Govind from Burhanpur, who got the job of pond digging, urged the chief minister to ensure that wages are paid weekly instead of fortnightly.

However, volunteers in many districts claim the scheme is ‘notorious’ for having delayed wage payments in the past, at times by over a year, which was the prime reason why labourers started migrating to other states.

Low wages (Rs190 per day) has also been driving labourers away from the scheme, Sachin Jain, senior activist from Vikas Samvad said.

He, however, underlined the fact that Centre could enhance MGNREGS budget which can be helpful in driving the rural economy out of gloom as labourers can’t save and will be putting back wages into the economy. He affirmed that labourers are shying away from the scheme at places due to coronavirus fears.

Ajay Dubey, secretary of volunteer organisation Prayatn, who was member of state monitoring committee of the scheme in 2009-10, claims that the scheme had always been marred by corruption in Dubey underlined another vital fact that if state government figures of close to 1.5 lakh labourers coming back from other states are true, it’s quite clear that the scheme has failed miserably in offering jobs and assets creation locally in the state, which are key points of the scheme mandate.

In districts such as Panna, while close to 17,000 migrant labourers have returned, most are not eager to work in MGNREGS. The administration has offered them ration for three months in advance and they made money in mahua collection as well, said Yousuf Baig, a volunteer and activist. Delayed wage payments had driven locals to look for work in other states in the last few years, affirmed Baig.

The MGNREGS works are also sluggish in Umaria district, a tribal-dominated region. Busy putting in all their resources to curb the spread of coronavirus, the government staff here is yet to take to field. Locals are busy in mahua-tendu patta collection and preparing for the monsoon season, said Birendra Gautam from Zenith Youth Foundation. The labourers are also getting low wages, as being a hilly area more hands are required within a fixed budget, said Gautam, adding that some gram panchayat at Mali are yet to see commencement of work. Yet, locals have no option but to work in these projects to keep their daily needs fulfilled.

As MGNREGS offers low and delayed wages, labourers from Niwadi, Panna and Chhatarpur prefer working in states like Haryana, Rajasthan and Delhi where unskilled workers earn upto Rs 400 a day and skilled ones get anything between Rs 600 to Rs 700, Mastram Singh from Niwadi said. Till recently, close to 12,000 labourers returned while only 2,500 got jobs in MGNREGS, Singh said, quoting the district administration.

At Niwadi, where harvesters were never used until this year, these machines arrived for harvesting as labourers were stuck elsewhere and harvesting ended by the time they returned.

In bordering districts like Jhabua — which shares border with Rajasthan and Gujarat — thousands of migrant labourers are approaching border each day amid lockdown and the administration’s entire focus is on MGNREGS work.

The administration is busy controlling the migrant labourers, sending to suspects into quarantine and sending back those from other states. As a result, very little work related to MGNREGS has started in Jhabua, said Harish Shankar Pawar of Lok Jagrti Manch which works in Dhar, Jhabua and Ratlam.

He affirmed that delayed and low wages in the scheme disenchanted the labourers who, as a result, migrated to other districts in huge numbers. He recounted an instance from 2010 when the tribals had resorted to foot march amid drought for the commencement of MGNREGS work. The then collector Neeraj Mandloi had approached us in the middle of the march and promised that work would start soon, added Pawar.

To restoring labourers’ faith, the administration should be transparent about the financial aspects of the scheme, farmer Laxman Singh Munia from Petlavad in Jhabua demanded, alleging that MGNREGS payments in the past got delayed up to six months. There are labourers who also don’t have job cards, added Munia.

Most volunteers claimed that work has started just now and there is clarity about wage payments as of now.

Meanwhile, a request to MGNREGS state spokesperson about the financial details of the scheme remained unanswered.

By May 6, Dhar district was at the top with maximum 5,233 works under the scheme, while Neemcuh was at the bottom with 490 undergoing works among 51 districts, according to a state government report.