Cyclone Titli is likely to make landfall between Gopalpur and Kalingapatnam early on Thursday morning and may trigger heavy rain accompanied by strong winds blowing at 125kmph.

Bhubaneswar: The Odisha government on Wednesday evacuated approximately three lakh people in five coastal districts of the state, as Cyclone Titli over the Bay of Bengal intensified into a "very severe storm" and inched towards the Odisha-Andhra Pradesh coast.

People living in the low-lying areas and hutments along the coast line were shifted to safer places, chief minister Naveen Patnaik said. The India Meteorological Department (IMD) said rainfall would be accompanied by gale wind speed reaching 140 to 150 kmph and gusting to 165 kmph along and off Odisha and north Andhra Pradesh coasts.

In view of the tidal surge forecast by the IMD due to the storm, Patnaik asked the collectors of Ganjam, Puri, Khurda, Kendrapara and Jagtsinghpur districts to start immediate evacuation of people in the low-lying areas in the coastal belt, officials said.

He also asked the authorities to ensure "zero casualty" and keep the cyclone shelters ready for housing the people. Patnaik also ordered closure of all schools, colleges and anganwadi centres on Thursday and Friday in view of IMD's forecast of heavy to very heavy rainfall across the state.

The college student union elections, earlier scheduled to be held on Thursday, have been cancelled.

Chief secretary A P Padhi said immediate evacuation was launched in view of the IMD forecast of a tidal surge of about 1 metre during landfall of very severe Cyclone Titli. "We have 836 shelters ready to house the people," deputy SRC Pravat Kumar Mohapatra said. 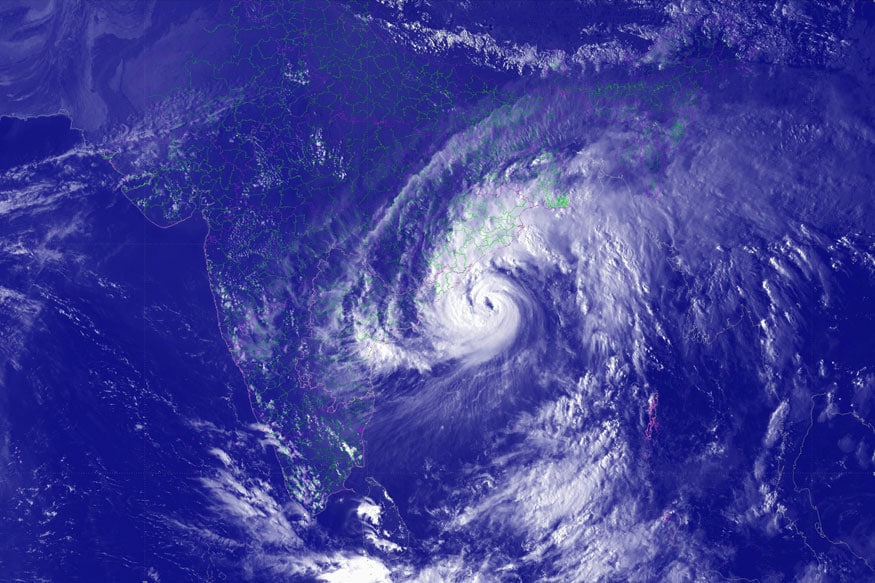 Cyclone 'Titli' intensified into a severe cyclonic storm Wednesday and is moving towards the Odisha-Andhra Pradesh coast, triggering rainfall in several parts of Odisha, according to the IMD. (Photo: IMD hand-out via PTI)

Official sources said 9,83,642 people were evacuated when Cyclone Philin hit the state in 2013 and 2,55,042 people were shifted to multi-purpose shelter centres during Cyclone Hudhud in 2014. The state was also hit by Cyclone Daye last month, but its intensity was low.

The chief secretary said the National Disaster Response Force (NDRF) and Orissa Disaster Rapid Action Force (ODRAF) personnel have been positioned in vulnerable districts. "We have not yet sought help of Army," Padhi said, adding that troops are on standby.

An East Coast Railway (ECoR) official said train services will remain suspended between Khurda Road and Vizianagram from both directions after 10 pm on Wednesday till further notice. At least six trains were cancelled, three were short terminated and around ten trains passing through ECoR were diverted, he said. Several flights were also disrupted, while many were cancelled.

The IMD said Cyclone Titli has moved at a speed of about 18 kmph in the last six hours over west-central Bay of Bengal and lay centred at about 230 km south-southeast of Gopalpur in Odisha.

The storm is likely to move north-northwestwards and cross Odisha and adjoining north Andhra Pradesh coast between Gopalpur and Kalingapatnam around 5.30 am on Thursday morning, it said.

Thereafter, the cyclone is likely to re-curve north-eastward, move towards Gangetic West Bengal across Odisha and weaken gradually, H R Biswas, director of the meteorological centre in Bhubaneswar, said.

While several areas in coastal Odisha were lashed by rain on Wednesday, the IMD has forecast "heavy to very heavy rainfall" at several places and "extremely heavy rainfall" at isolated areas till Thursday under the impact of the 'very severe' cyclonic storm.

It also forecast heavy to very heavy rainfall for Kandhamal, Boudh and Dhenkanal districts from Thursday.

The sea condition is very high over west-central Bay of Bengal. It is very likely to be phenomenal over the west-central and the adjoining north Bay of Bengal and along and off the south Odisha coast till Thursday, it said.

Storm surge of height of about 1 metre above astronomical tide is very likely to inundate the low-lying areas of Ganjam, Khurda and Puri districts, it said.

The IMD advised total suspension of fishing operations and shifting of coastal hutment dwellers to safe places. Fishermen along the Odisha coast, and central and north Bay of Bengal were advised not to venture into sea till Friday.

In view of adverse weather conditions, the IMD has also advised hoisting of local warning signal LW-4 at all ports of Odisha.

Special Relief Commissioner (SRC) B P Sethi said the Odisha government was prepared to face possible floods in view of the heavy rainfall across the state. Sethi said the state government has already informed the Air Force and Indian Navy about the situation and may take their help if required.

Around 300 motor boats have been arranged to assist in rescue operation as there is a likelihood of flood situation due to possibility of heavy rains till October 11.
All the 836 cyclone and flood shelters have been kept in a state of preparedness, while adequate relief materials arranged, the SRC added.
Tags: