Jostled Out of Queues, Payday is Pain Day For Pensioners

Octogenarian pensioners wait for their turn inside a bank in Delhi on Thursday. (Photo:News18.com)

For octogenarian pensioners, Prime Minister Narendra Modi's call for going cashless and urging citizens to start having digital wallets, sounds nothing but 'gibberish'.

Debayan Roy
New Delhi: When Hrishikesh Bhatia, a former Central Government Employee, woke up on Thursday morning, all he had with him was a Rs10 coin and letters from the local creditors who had demanded to be paid by the evening.

Bhatia, like several other pensioners across the city, was hoping to be able to withdraw some money from the bank during the first payday post demonetisation.

But he returning home dejected after being pushed aside in queues or being told that the bank had run out of cash as early as 11 am.

"Look at the cunning smile on the bankers face; I am sure they are saving up to pay their favored customers. I think I will die in the bank itself (sic)," he said. Bhatia gets Rs 23,000 as monthly pension and has to sustain a family of four including two physically challenged daughters. Fuming, Bhatia, who along with his three other pensioner friends were standing in the queue in front of the Bank of Baroda branch at Jungpura since 5 am anticipating a huge rush, did not hold back on blaming the government for this 'chaos.'

"We are too patient, and if this decision was in any other country, there would have been riots. Do you think I have black money? I have to pay my bills, the medical store has been calling me up since the last three days asking me to clear the dues, but I simply have no cash," said Manohar Srivastava, a retired senior professor at the Delhi University who was accompanying Bhatia.

"Whenever I am here at the bank I have to fight for my space along with the young customers who inch us out. Do you think I am carrying black money? Ministers are having weddings for crores and we are fighting here, which bank is giving them the money?" He asked.

For octogenarian pensioners like Wafa Mehmood, Prime Minister Narendra Modi's call for going cashless and urging citizens to start having digital wallets, sounds nothing but 'gibberish'. Mehmood had pinned her hopes on the Canara Bank branch located on Bhogal road, but soon realized 'it was not her day'.

"Forget separate lines, the bank has stairs and we have to stand on each of the step for at least 30 minutes. I live alone and have been coming to the banks since the last days continuously to withdraw cash but have been unsuccessful," said Mehmood, who had fallen on the bank stairs last week in a bid to withdraw cash. "Today I have to withdraw a part of my pension, else what will I even eat?" the determined pensioner said.

Chandni Chowk junction has the largest branch of State Bank of India in Delhi and boasts of having '6 ATM machines inside', but the weary pensioners gathered there tell a different tale.

Abhay Wadhawan, a former employee at Udyog Bhawan in his 70s, says he smells :something is fishy in these banks which is delaying the cash disbursal". "I have myself seen people coming late evening to the banks and handing them cheques specifying the amount they need and casually collect it the next day. The entire system is corrupt, and you say black money is trying to be weeded out (sic)," he said. 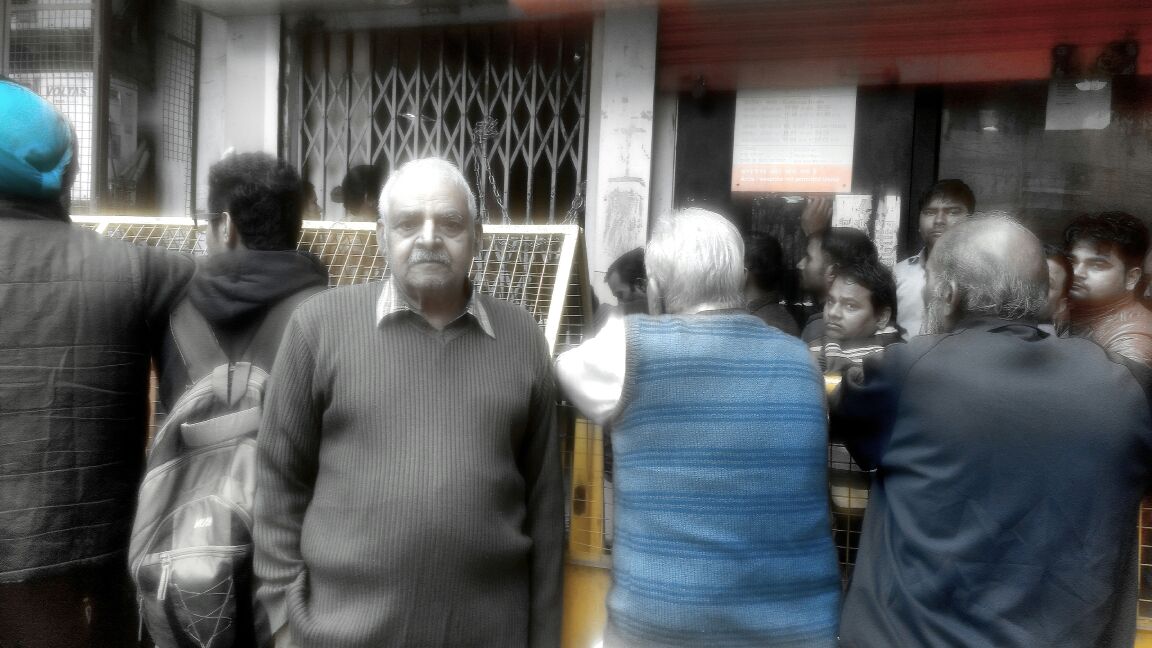 DN Sharma, a former Northern Railway official, who had travelled from Dwarka to the Karol Bagh branch of Punjab National Bank was dejected after being told the cash is over and was clueless about "whether at all to return home". "I am standing here since the last 5 hours. This is the bank which has a large number of pensioners; hence I thought we will be given preference, but nothing at all. The bank says they have 2 lakh in cash, but they have transactions worth crores. Is the bank lying or the government?" he said.

Another pensioner, Zaroon Shaikh, a former rail superintendent, believed it is the government which is at fault and that banks are mere victims. "Yesterday I saw that the bank had requested for Rs 1 crore, but had been sanctioned only 25 lakh. How will they cater to this mad demand, especially on the 1st of the month?" he asked.

"A regular pension holder has medical bills, ration and gas receipts to pay and also a lump sum amount at home which would save them from travelling to the banks daily. But the new currency is being sold in the black markets by the banks itself and even the companies who have been entrusted with the job to fill up the ATMs. With crores of pensioners, how will the demand be met?" he said.
Tags