One of the best measures to judge the outbreak of Covid-19 is the 'Tests Per Case Ratio'. Countries which report a high ratio are conducting a high number of tests per case.

As the number of Covid-19 cases surge in India, it is likely to overtake UK and Spain in the next couple of days and reach number four on the overall confirmed infections. However, to measure the number of cases in isolation and judge the spread of the pandemic in any country is a futile, incomplete and inaccurate exercise.

One of the best measures to judge the outbreak of Covid-19 is the Tests Per Case Ratio. Countries which report a high ratio are conducting a high number of tests per case.

This in turn would suggest that there is a lesser difference between the confirmed cases and the actual number of cases in these countries. This would imply that they were either able to monitor the outbreak efficiently from the start or took adequate measures after the initial outbreak and eventually brought the curve for new cases to move downwards while increasing the ratio of tests per case consistently.

India’s Cumulative Tests Per Case ratio currently stands at 18.44 – that is a significant drop from 25.95 on May 5. More worryingly, there seems to be a direct correlation between the lifting of certain stringent lockdown restrictions and a rise in India’s Daily Positivity Ratio (The percentage number of cases per tests daily). After registering a dip from April 25 to May 3 and reaching its lowest of 3.2% since the lockdown was imposed on March 25, it has steadily been on an upward trajectory and more than doubled to 6.90% on June 7.

This suggests that the number of cases have risen at a proportionately higher rate than the number of tests since May 3 when a number of curbs were eased after the end of Lockdown 2. According to Our World in Data, India was clubbed in the 20-40 range with countries like Burma, Poland, Czech Republic, Bulgaria, Austria and Paraguay according to the 7-day rolling average of Daily Tests Per Confirmed Case as on the 15th of April. While India remained in the same range on May 1, they had new company – Russia, Spain, South Africa, Germany and Italy amongst other countries.

India remained in this range till May 20. 21st of May was the first day India’s Tests per Case Ratio went under 20. It was in the same cluster as USA. On June 1, when India conducted just 15.55 Tests per Case, it was clubbed together along with Indonesia, Philippines, Singapore and South Africa.

The creative below shows the ratio on June 7. At 14.41 tests per confirmed case, India is in the same range as South Africa, Philippines and Singapore. Countries which are faring poorly than India include Argentina, Columbia, Norway, Saudi Arabia, Iran, Indonesia and Bangladesh, all in the 5-10 Tests per Case range.

Chile (3.9), Bolivia (2), Mexico (1.05), Panama (3.22), Pakistan (4.64) and Qatar (2.65) have the worst Tests per Case ratio, all in the below 5 cluster. Brazil, in all likelihood, is also in this cluster but their latest testing data is not available. These are alarming numbers. Basically it implies that every 5th person who is being tested in Pakistan, on an average, is positive.

Mexico is almost facing an emergency. Its Tests per Case ratio of 1.05 on June 5 means that almost everyone who was tested that day was positive. Coupled with that, Mexico has a higher number of cases (1,20,102) and a very high Mortality Rate of 11.7%.

New Zealand, which hasn’t reported a new case in 17 days and declared the nation virus-free, is marked in dark blue – it tested 25,606 cases on May 28 without registering any new case. Australia, which has reported just 7,267 cases thus far and done a remarkable job in containing the virus given its size, conducted 2,017 tests per case as on June 5. The corresponding number for Taiwan was 1,274 on June 6 – another country hailed for its model of containment. Croatia, Lithuania, Slovakia, Slovenia and Iceland are the other countries in the same club (more than 1,000 tests per case).

Some European nations who are now conducting between 100-1000 Tests per Case have finally managed to bend the curve - these include Germany, Italy, Austria, Greece and Switzerland. Other prominent nations in this club include South Korea and Thailand.

Italy is one of the worst affected Covid-19 countries. They were overwhelmed and unable to control the pandemic initially – not surprisingly they conducted 3.91 Tests per Confirmed Case on March 23 – basically, one in every 4th person being tested was positive. They increased this ratio to 18.11 in a month on April 23 to 93.51 on May 23. The number stands at 158.76 on June 6.

France and Spain have a similar story. They are amongst the worst-hit nations in the world but have now managed to control the outbreak and are on a downward curve. They are clustered together in the 40-100 club with Netherlands, Belgium, Poland, Romania, Turkey, Malaysia and Canada amongst others.

UK, USA and Russia are conducting 20-40 tests per confirmed case. Russia’s curve dipped from 116 tests per day on April 1 to 17.38 on May 9. Since then, though the number of daily new cases continue to be high, Russia seems to have passed its peak, and the ratio has risen and doubled to 33.46. All nations who are now reporting a high Tests per Case ratio have already seen a downward spiral in their Daily New Cases. This suggests that adequate testing has met the challenge of the outbreak. Germany’s initial curve is red suggesting that they were not testing enough in that period but they changed that fantastically from May. South Korea has recently reported a new spike but the numbers are not alarming.

It is interesting that Sweden who did not go for a strict lockdown and were initially praised for their model of containment and then were subsequently criticised, have tested very poorly and seen a surge in their number of cases along with a high Mortality Rate.

The concern for India is that not only is their Daily Tests per Case ratio going down, the cases are surging, the peak is far away and the Tests per Death ratio is doing down (from 793.72 on May 5 to 651.41 on June 9). 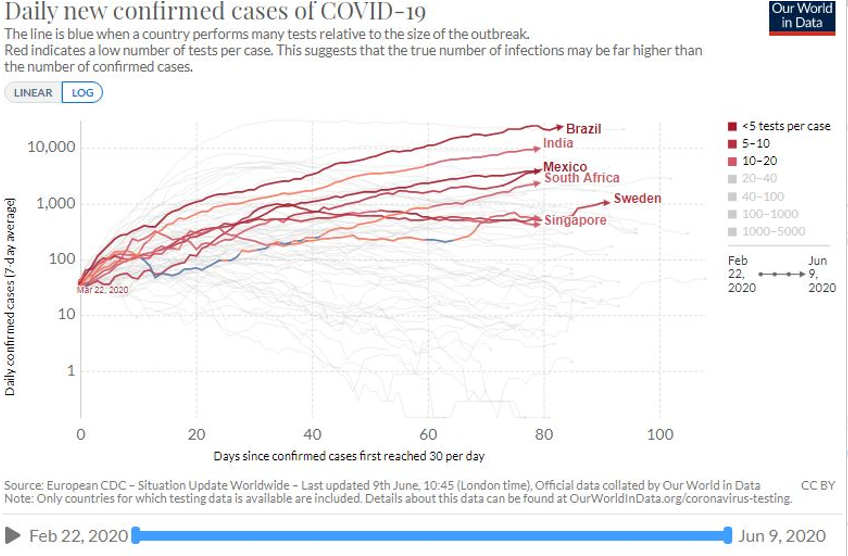 So far, the silver lining for the country has been the remarkably low Mortality Rate but with most lockdown restrictions lifted, and the pressure on hospitals and the health infrastructure increasing, the situation can get out of control in no time.