Parliament Highlights: A day after the Rajya Sabha saw unprecedented ruckus over agriculture bills, Chairman of the Upper House M Venkaiah Naidu suspended 8 MPs, including TMC’s Derek O’Brien and AAP’s Sanjay Singh, for unruly behaviour in the House. Expressing his disappointment over a “bad day for Rajya Sabha”, Naidu said some members snatched mics and abused the deputy chairman. “Rule book was also thrown at him. This is unfortunate, unacceptable and tarnishes the image of Parliament. If marshals were not called, I wonder what would have happened.” Naidu also rejected the motion of no-confidence received against Deputy Chairman Harivansh, saying it was not in proper format and required notice of 14 days. The list of suspended MPs is as follows: Derek O’Brien, Sanjay Singh, Dola Sen, Rajeev Satav, KK Ragesh, Syed Nassir Hussain, Ripun Bora and Elamaram Kareem.

The war of words between the BJP and the opposition MPs on the ruckus in Rajya Sabha yesterday over the farm bills is likely to escalate today as the party may move privilege motion against several opposition MPs accused of unruly behaviour in the House. The development comes hours after 12 opposition parties gave a notice for a no-confidence motion against Rajya Sabha Deputy Chairman Harivansh over the manner in which the bills were passed in the House after he overruled their pleas for an adjournment of the proceedings. The ruckus started yesterday when the government was keen to put the farm bill to vote immediately after Agriculture Minister Narendra Tomar’s reply, but the opposition, led by Congress leader Ghulam Nabi Azad, wanted the Rajya Sabha to take up the minister’s reply and the vote on Monday. When the government refused, all hell broke loose.

First to come up to the well of the House were Trinamool Congress MPs Arpita Ghosh and Dola Sen, Congress MPs Kumari Shelja and Jairam Ramesh, and AAP lawmaker Sanjay Singh. Then TMC leader Derek O’Brien too came up to the well with the rule book to show that it was a violation of the House rules not to allow division of votes or voting by pressing the button. O’Brien’s actions are now mired in controversy, with some insisting that he tore the pages of the rule book. A close viewing of the Rajya Sabha footage adds to the confusion. It shows DMK MP Tiruchi Siva throwing a book even as O’brien was close to the chair, showing the deputy chairman the particular rule on button voting.

When the entire nation came out and saluted the corona warriors on 22 March at 5 pm, they were given the status of martyrs, says Union Health Minister Dr Harsh Vardhan

We have informed officials to alert the health ministry when a corona warrior's death happens. The data given to the Rajya Sabha are the number of those whose claims have been fulfilled after they were sent by the state governments. This data can never be updated with the central government becuase these can be maintained by states. The data that we have has been presented to the Rajya Sabha: Union Health Minister D Harsh Vardhan Yesterday I had said that several doctors and health workers sacrificed their lives while trying to save patients. I had also said that they should be given the status of martrys. If there is God above us, we call doctors 'demigod': Congress MP Adhir Ranjan Chowdhury TMC supremo and Bengal Chief Minister Mamata Banerjee announced that her party is ready to support anyone who wants to take the lead for the sake of farmers.

Twenty-five years back during our battle against so-called "deadly" AIDS, the govt had to run ads on national tv channels to prevent the stigma around AIDS but that was only against patients and did not include the healthcare workers. Unfortunately, the stigma and ostracisation this time due to the Covid pandemic happened not only against the patients but also the healthcare workers who have been working for 24x7 hours. I shudder thinking what would have happened if the govt had not sided with them: BJP MP Rajdeep Roy

Apna Dal's MP Anupriya Patel urges central govt to provide the 'protection' proposed to be granted to corona warriors to the sanitation workers who are exposed to bio-medical wastes as much as the doctors and nurses.

BJP has issued three-line whip to its Rajya Sabha MPs directing them to be present in the House tomorrow and support the Government's stand.

"In order to replace the vintage Epidemics Diseases Act of 1897 which was enacted after the Bubonic plague in pre-Independent India after 123 long years it is high time that it is replaced by a Bill which is contemporary in nature and relevant to the needs of the time," says BJP MP, Sangeeta Kumari Singh Deo.

Higher MSP will empower farmers and contribute to doubling of their income. Increased MSP, along with the series of agriculture reforms passed by Parliament will ensure dignity and prosperity of farmers. Jai Kisan!: Prime Minister Narendra Modi

Higher MSP will empower farmers and contribute to doubling of their income. Increased MSP, along with the series of agriculture reforms passed by Parliament will ensure dignity and prosperity of farmers. Jai Kisan!

I think that Covid-19 frontline workers should be treated as martyrs as these healthcare workers including fresh MBBS graduates have been working since day 1 in battle against Covid-19 which is why mortality rate in India is much lower compared to the other countries: MP Dr Srikanth Eknath Shinde, SS, Kalyan (Maharashtra)

The Bill aims to impact of the increasing confidence in the community of healthcare service personnel so that they can continue to contribute serving mankind through their novel profession during extremely difficult circumstances: BJP MP, Dr Shubhash Bhamre tells Lok Sabha

Lok Sabha passes the Insolvency and Bankruptcy Code (Second Amendment) Bill 2020. The bill was passed by Rajya Sabha on September 19.

Till July 2020, Insolvency & Bankruptcy Code rescued about 258 companies through resolution plans. Of the companies rescued, one third were either totally sick or defunct. The process under the code has yielded liquidation of 965 companies: Finance Minister Nirmala Sitharaman tells the Lok Sabha

West Bengal Chief Minister and Trinamool Congress supremo Mamata Banerjee spoke to the suspended MPs from different parties who are protesting under the Gandhi statue at the parliament premises. She appreciated their efforts in fighting for farmer bills, labour bills and upholding values of Parliament. The call lasted for about 10 minutes. (Image: News18) 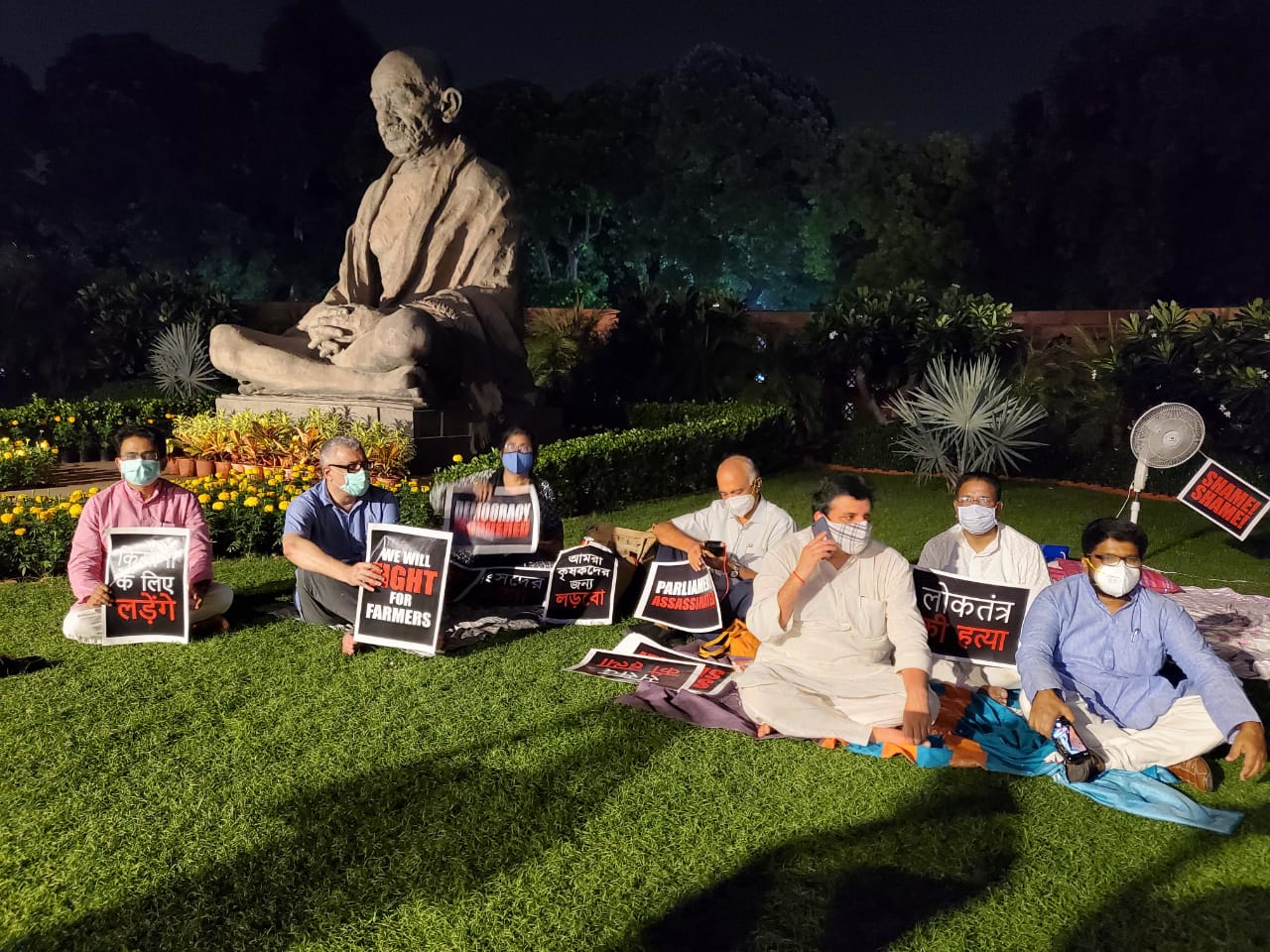 This is callous. They have made a mockery of the farmers’ protests over Farm Bills, which by all accounts will eventually pave the way for ending MSP system and abolish Food Corporation of India: Punjab CM Captain Amarinder Singh on the hike in MSP of wheat and 5 other Rabi crops 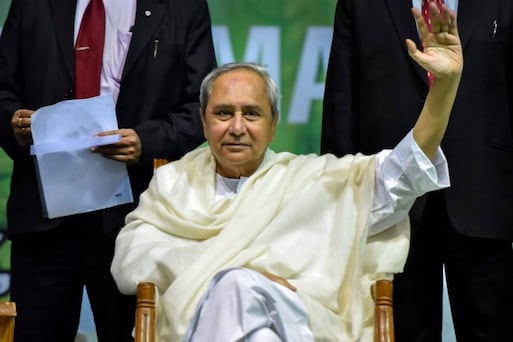 The BJD's RS MP Sasmit Patra said his party is opposed to the farm bills in their current forms and wants them to be scrutinised by committees to ensure small farmers are protected.

Even before the Covid-19 Pandemic, Indian economy was in a free-fall for seven quarters. Fundamentals of an economy: savings, investment, consumption and employment have been under stress. In the first six months of 2019, credit offtake was down by 93% from Rs 7,35,000 cr to 93,000 crores : Congress MP Manish Tewari 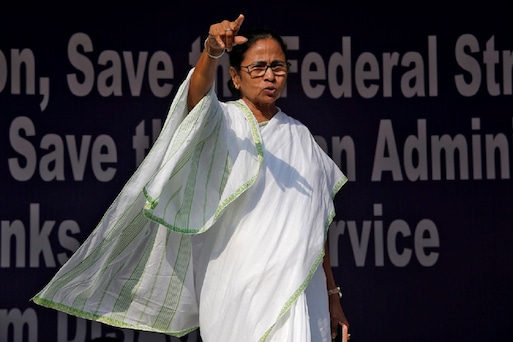 All opposition parties should come together and fight these bills tooth and nail, said Banerjee who is also the Trinamool Congress supremo.

Covid-19 pandemic, followed by lockdown has adversely affected business operations across the world. This has further increased the pressure on distressed Indian markets. MSMEs and other small scale businesses. However the IBC Amemdement Bill 2020 is classic example of good intenstions but bad drafting: AITC MP Pratima Mondal on discussion on Insolvency and Bankruptcy Code (Second Amendment) Bill, 2020

Agriculture minister Narendra Tomar revises MSP for 6 Rabi crops. MSP for wheat has been raised from Rs 50 per quintal to Rs 1,975 per quintal.

At one hand, this govt invites foreign parties to invest in the country but when foreign funds are received for charitable purposes, educational needs, you want to stop these initiatives: Congress MP Adhir Ranjan Chowdhury

The FCRA was brought into law to contain foreign funding to interfere into Indian political system, however the govt in 2018 amended the FCRA to exempt political parties from scrutiny. Any foreign party can buy electoral bonds without scrutiny under FCRA. Instead of looking at this why do you want to go after NGOs doing good work?, asks AITC MP Mahua Moitra The Bill will weaken the work undertaken by organisations during the times of flood, Covid-19 and unemployment. I request you not hurry with this Bill. After listening to issues raises, I request this Bill to be sent to the Sanding Committee and discuss with various NGOs and table concerns related to national security and administration and come to a consensus, says Congress MP, Gaurav Gogoi. He also urged the govt to rethink how the 20% cut in administration will lead to more unemployment.

There are a lot of organisations that are doing wonderful philanthropic activities, Don't undermine their goodness and spoil their morale. This Bill will allow organisations of your choice to exist and others to face a natural death: IUML MP, ET Mohammed Basheer

If the Director or Manager of an organistaion wants to hide their identity and can't disclose their address, what work will they do? It casts suspicion on their intention. Why is Aadhaar Card being opposed?: MoS MHA Nityanand Rai

Later, in back-to-back high-profile press conferences, both the BJP and Congress blamed each other for tarnishing Parliament’s image because of what transpired in the Rajya Sabha on Sunday as the two contentious farm bills — Farmer’s Produce Trade and Commerce (Promotion and Facilitation) Bill, 2020, and the Farmers (Empowerment and Protection) Agreement of Price Assurance and Farm Services Bill, 2020 — were passed amid massive ruckus through voice vote. A number of protests were also staged during the day by farmers in several places, especially Punjab and Haryana, against the bills.

Defence Minister Rajnath Singh flanked by five other Union Cabinet ministers addressed a press conference on Sunday evening and condemned the alleged misbehaviour with Deputy Chairperson Harivansh Narayan Singh by opposition members. He said “democracy was shamed” by the conduct of Opposition MPs in the Upper House of Parliament, while adding that he too is a farmer and nobody should believe the government would do anything to hurt the farmers.

Minutes later, the Congress said the members were upset with the way the bills were being passed, while noting that everyone went in the well of the House, including BJP leaders, and called it a conspiracy by the ruling party.

Congress’ chief spokesperson Randeep Singh Surjewala said the same Parliament to which Prime Minister Narendra Modi had bowed his head after coming to power had been shamed by the conduct of his ministers.

A video footage shows some torn pages being thrown at the same time. O’brien, however, denies tearing up the rule book. “If even one proof is given of me having torn the rule book, I shall resign as MP tomorrow,” he told News18.