Parliament LIVE Updates: A fresh bill to ban the practice of instant triple talaq was introduced in the Lok Sabha today, while AIADMK is set to raise Tamil Nadu water crisis in Rajya Sabha. The Muslim Women (Protection of Rights on Marriage) Bill, 2019, which has been listed in the Lok Sabha's agenda for Friday, will replace an ordinance issued in February by the previous BJP-led NDA government.

With the dissolution of the 16th Lok Sabha last month, the previous bill had lapsed as it was pending in the Rajya Sabha. The Bill, which proposes to make the practice of instant triple talaq (talaq-e-biddat) a penal offence, had faced objections from the opposition parties which claimed that jail term for a man for divorcing his wife was legally untenable.

Twelve political parties jointly gave a notice for a short duration discussion on electoral reforms on free and fair elections. The same has been accepted and will come up for debate in the Rajya Sabha on July 8. Congress, Trinamool Congress, CPI-M, CPI, RJD, AAP, DMK, NCP, TDP were among the 12 parties that gave a notice for the same.

Bill to Reverse Sabarimala SC Verdict Introduced in Lok Sabha | Kollam MP NK Premachandran introduced a private member bill for the consideration of the Lok Sabha seeking a ban on the entry of women aged 10-40 years in the Sabarimala temple. It was on September 28, 2018 that the Supreme Court declared a Kerala government law barring the entry of women aged between 10 to 40 years from entering Sabarimala unconstitutional.

Union Minister Piyush Goyal says "The government appreciates the intention. The Council of Ministers will consider the proposal."

The bill has been defeated by voice votes.

Rajya Sabha has now introduced The Parliament (Enhancement of Productivity) Bill, 2017. The Bill was introduced in 2017 by Naresh Gujaral, who wanted to make sure that the House functions for at least for 100 days.

Rajkumar Dhoot moves a bill to provide protection to families of farmers.

The Lok Sabha has been adjourned till 3:40 p.m

Asaduddin Owaisi on why he is opposing the Triple Talaq Bill.

A Owaisi, AIMIM: Triple Talaq bill is unconstitutional. It's a violation of Constitution's Article 14 & 15. We already have Domestic Violence Act 2005, CrPC Section 125, Muslim Women Marriage Act. If Triple Talaq Bill becomes a law it will be even greater injustice against women. pic.twitter.com/khvMLGDnHG

Samajwadi Party MP Azam Khan says his  Party Supports what is Written in the Quran | "Triple Talaq is a religious issue, not a political issue and nothing is more supreme for a Muslim than Quran. On marriage, on divorce, for everything, the Quran has clear instructions and we follow it," SP MP Azam Khan was quoted as saying by ANI.

"A woman leader like Sonia Gandhi ji is the leader of Congress party, yet Congress party takes an anti-women position in the Lok Sabha, opposing even the introduction of the Bill, I must say it is not only painful but deeply regrettable," added Ravi Shankar Prasad

"It was a matter of great distress that Congress chose to oppose introduction of Triple Talaq Bill. Earlier they had not opposed it, last time they had walked out from Lok Sabha. But today they were siding with the likes of Mr Owaisi who were opposing it," says Union Minister Ravi Shankar Prasad. Also, the Rajya Sabha has been adjourned and will re-commence at 2:30 pm.

Voting was underway for the Triple Talaq bill to be introduced in the Lok Sabha.

Lok Sabha: Voting for introduction of Triple Talaq Bill 2019 in Lok Sabha today was held through paper slips as the new MPs have not yet been allotted division number that allows them to vote using polling machine. pic.twitter.com/cTsMeeVvJo

187 members have said YES to the introduction of the bill while only 74 are against it. The bill has been introduced.


Why are the Opposition MP's Opposing the Triple Talaq Bill? |  While most of the MP's want the practice of instant talaq to be abolished, the opposition MP's are against the provisions in the bill which makes giving instant talaq a criminal offence and serves a 3 year jail term to any man who divorces his wife through this method.

In the Hindu Marriage act, abandoning the wife attracts a one year jail term for the male. MP's like Asaduddin Owaisi and Shashi Tharoor are questioning why Muslims have to face harsher punishment  for a similar offence. They also claim that the bill will not do anything for the upliftment of muslim women.

Lok Sabha prepares to vote for division on the introduction of the Triple Talaq Bill. Since the rolls of division have not been alloted,  division will take place through slips. Each member will get to choose their slips. Red slip for a no vote, green for yes and yellow for abstain. The members will also have to mention their names, contituency etc.

Understanding What Exactly is Triple Talaq | So to explore the question of triple talaq, one must understand that in Islam, everything is followed as per Sunnah (Deeds of the prophet). Hence, most Muslim women bodies opposing 'triple talaq’ want the Muslim bodies to adopt ‘Talaq-e-Sunnah’ (Divorce as per the Prophet’s sayings and Quranic dictation) and discard ‘Talaq-e-Biddah’ (Divorce as per a later formed mode of divorce which propagates instant divorce).

Ravi Shankar Prasad responds to the opposing MP's, says the rights of Muslim women will be protected as the bill is about justice and empowerment of women. "People have chosen us to make laws. It is our work to make laws. Law is to give justice to the victims of Triple Talaq," said Mr. Prasad. 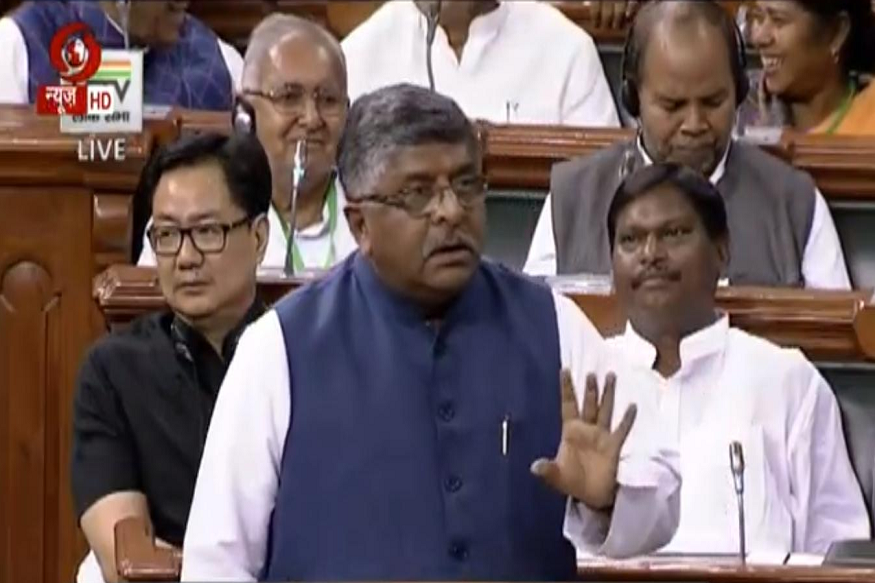 "If customs and traditions can be protected by law, it is good. It is not appropriate to drag devotees to the streets. Earlier too, we had requested Centre to pass legislation regarding this," says Kerala Devaswom Minister, Kadakampally Surendran on Sabarimala issue

Asaduddin Owaisi, MP from Hyderabad also opposes the bill, says it violates Article 14 and 15 of the Constitution. He also adds that the government does not care about Muslim women and brings up the Sabrimala issue to question the government on women rights.

Tharoor said that he is against instant Talaq but is opposed to making it a criminal offence. He adds that the scope of the bill should be extended to women of all communities and religion.

MP from Thiruvananthapuram, Shashi Tharoor, opposes the Triple Talaq bill as soon as it is introduced.


The Triple Talaq Bill has been introduced by Union Minister Ravi Shankar Prasad.

MP's from Karnataka object to accusations by Tamil Nadu members that the state hasn't released Cauvery water to Tamil Nadu which has resulted in water scarcity. MP's from both the state get in a row as the speaker intervenes. "Tamil Nadu is a water deficit state.The only major river system in the state is Cauvery river system. Only solution is that Centre should take complete authority of mngmt of water of Cauvery. The release of water should be immediate." said Vijila Sathyananth, AIADMK MP, in Rajya Sabha.

MP Binoy Viswam asks the State and Central government to urgently intervene in Bihar's Muzzafarpur where the death toll of children due to encephalitis has risen to 136. "Doctors are just one part of the system," he says as many MP's agree. 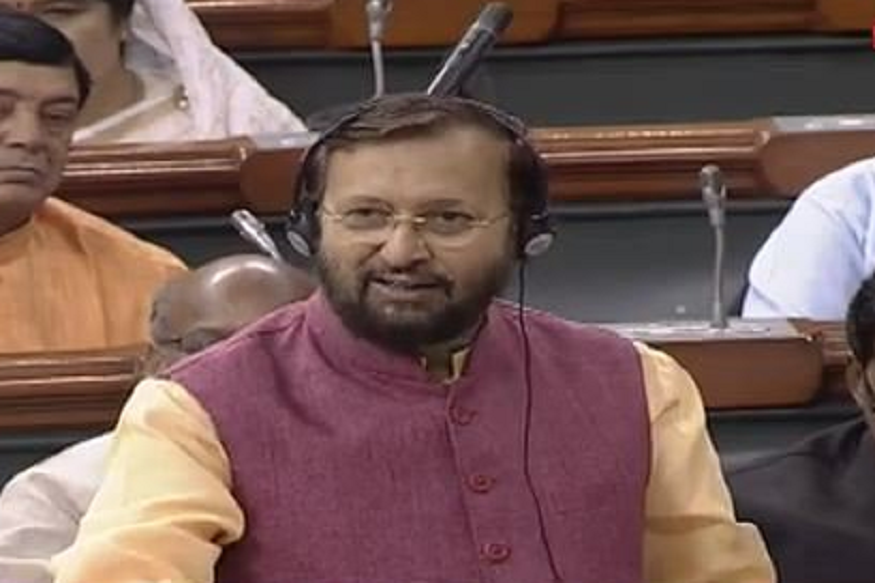 The government had promulgated the ordinance on triple talaq twice — in September 2018 and in February 2019 — as the contentious bill remained pending in the Rajya Sabha, though it was passed by the Lok Sabha.

Under the Muslim Women (Protection of Rights on Marriage) Ordinance, 2019, divorcing through instant triple talaq is illegal, void and will attract a jail term of three years for the husband.

Seeking to allay fears that the proposed law could be misused, the government has included certain safeguards in it such as adding a provision for bail for the accused during trial. These amendments were cleared by the Cabinet on August 29, 2018.

While the ordinance makes it a "non-bailable" offence, an accused can approach a magistrate even before trial to seek bail. In a non-bailable offence, bail cannot be granted by police at the police station itself. A provision was added to allow the magistrate to grant bail "after hearing the wife", the government had said.

Since the Narendra Modi government returned to power in the recently held elections, it has decided to give a fresh push to these proposed laws in the newly-constituted Lok Sabha. These ordinances will have to be converted into laws within 45 days of the beginning of the session, else they will lapse.