Parliament Winter Session LIVE: Prime Minister Narendra Modi is addressing the historic 250th session and described it as a moment of pride for democracy. Describing the upper house as eternal and the soul of India’s federal structure, Modi said it is the place which values experience of those who excel in their respective professions.

The Parliament's Winter Session has gotten off to a stormy start as the Opposition cornered the government over the situation in Kashmir. MPs from the Congress, National Conference and the DMK protested in the well of the House against the instability in the Valley more than 100 days after the abrogation of Article 370. The Lok Sabha has been adjourned till 3pm.

Dr. Manmohan Singh argues that the real reason our economy is perishing is because of the BJP govt's "mala-fide unless proven otherwise doctrine of governance" - whereby the govt believes economic participants have deceitful intent unless they can prove otherwise.

JNU students took a detour through the bylanes of the varsity to continue marching towards Parliament. 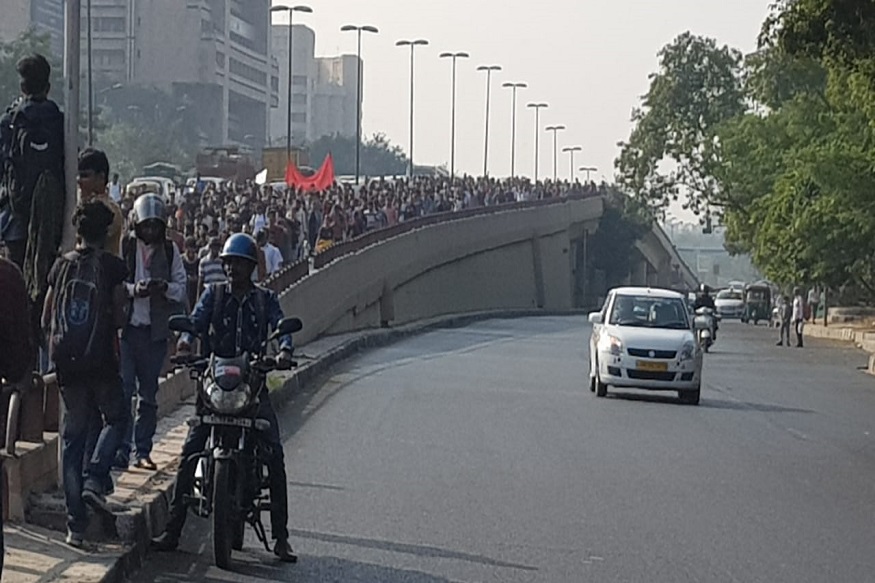 Mutual trust and self-confidence are the bedrock of such social transactions among people that foster economic growth. Our social fabric of trust and confidence is now torn and ruptured: Former PM Dr Manmohan Singh.

Prime Minister Narendra Modi concludes his speech and paves way for former PM Manmohan Singh. PM Modi concludes his speech parising NCP and BJD for adhering to parliamentary norms. "Today I want to appreciate two parties, NCP and BJD. These parties have strictly adhered to parliamentary norms. They have never gone into the well. Yet, they have raised their points very effectively. Other parties including mine can learn from them.," he says.

'Rajya Sabha Supportive, Not Secondary House', Says PM Modi | Heaping praises on the Upper House of Parliament, PM Modi says that Rajya Sabha is the second house and not the secondary house. "In fact, it should act remain the supportive House," he adds.

PM Modi says, "Everyone thought Triple Talaq will get stuck in the Rajya Sabha but it is maturity of this house that passed this significant bill and made it to a law. Same with section 370 and GST. We want States and Centre to work together. They are not competitors in taking the nation forward."

Prime Minister Narendra Modi says Rajya Sabha gives an opportunity to people away from electoral politics to contribute to the country and its development. "Rajya Sabha is the place that values experience of those who excel in their respective professions without contesting elections," PM Modi adds.

Terming Rajya Sabha as "eternal", PM Modi says "It is the soul of federal structure of india which never gets dissolved."

"This house has seen many historic moments, it has made history also and has seen history being made as well. It is a far-sighted house," says Prime Minister Narendra Modi.

Prime Minister Narendra Modi: "It is a pride to be part of Rajya Sabha. I feel great to be here on the 250th session of Rajya Sabha. Lok Sabha is grounded but Rajya Sabha can look beyond and far. The Upper House sabha has witnessed some historical days."

Prime Minister Narendra Modi speaks in Rajya Sabha during discussion on 250th session of the House. PM Modi congratulates all the Members of Parliament for the 250th session of Rajya Sabha. "250th in itself is not just time but a journey," he says.

Prime Minister Narendra Modi begins his speech for the 250th session of the Upper House of Parliament, Rajya Sabha.

Students of JNU have resorted to an alternate route to march towards Parliament. 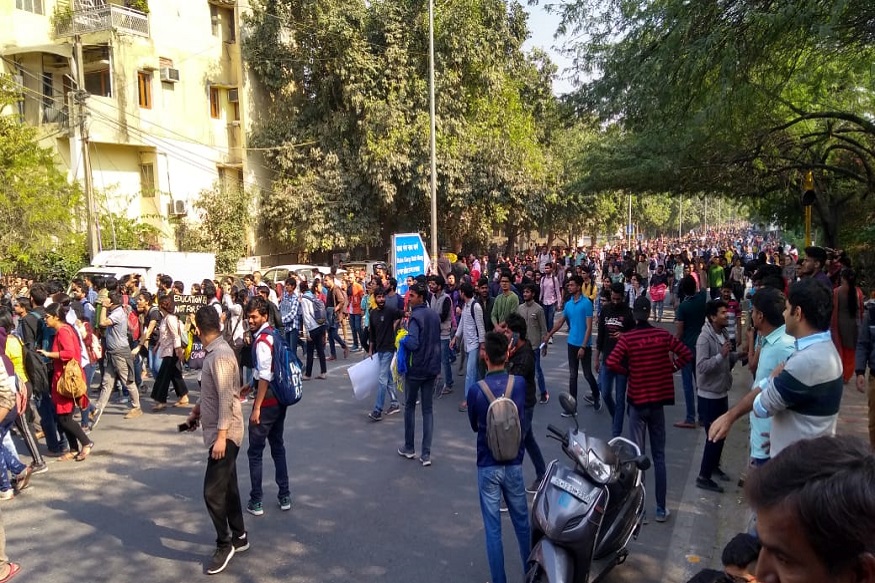 The Lok sabha has been adjourned till 3pm. The Chit Fund (Amendment) Bill, 2019, will be introduced by MoS Finance Anurag Singh Thakur at 3pm.

The uniform of the marshals of the Rajya Sabha has been changed:

The Congress MP from Thiruvananthapuram, Shashi Tharoor, says, "When Opposition tried to raise the issue that we're starting the Parliament Session even when one of us, Farooq Abdullah isn't even there because he has been arrested, we weren't even given the opportunity to raise the issue. So we had to raise our voice." 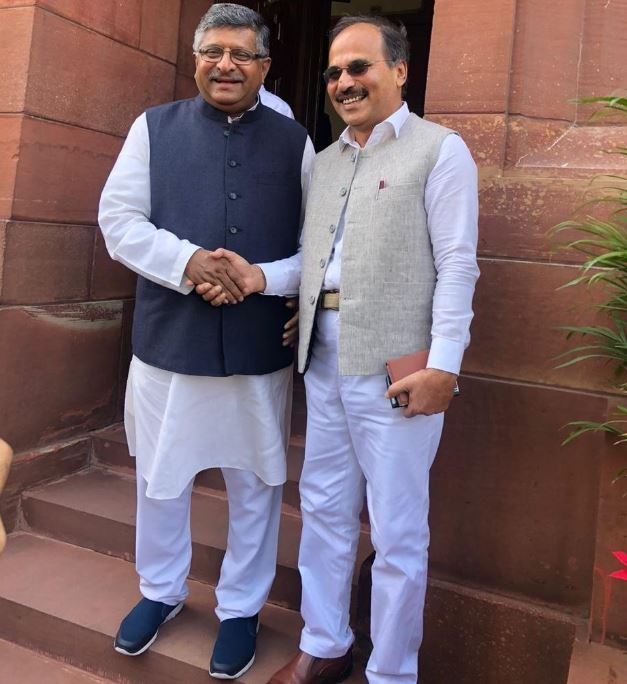 Lakshadweep MP Faizal PP Mohammaed in Lok Sabha says, "This is regarding development of Lakshadweep, most officers deputed there are from DANICS, who they do not understand the local issues. We have sent a proposal to MHA to extended service of DANICS to local people so that issues peculiar to Lakshadweep can be addressed properly and the area gets developed. We request MHA to look at the proposal seriously." 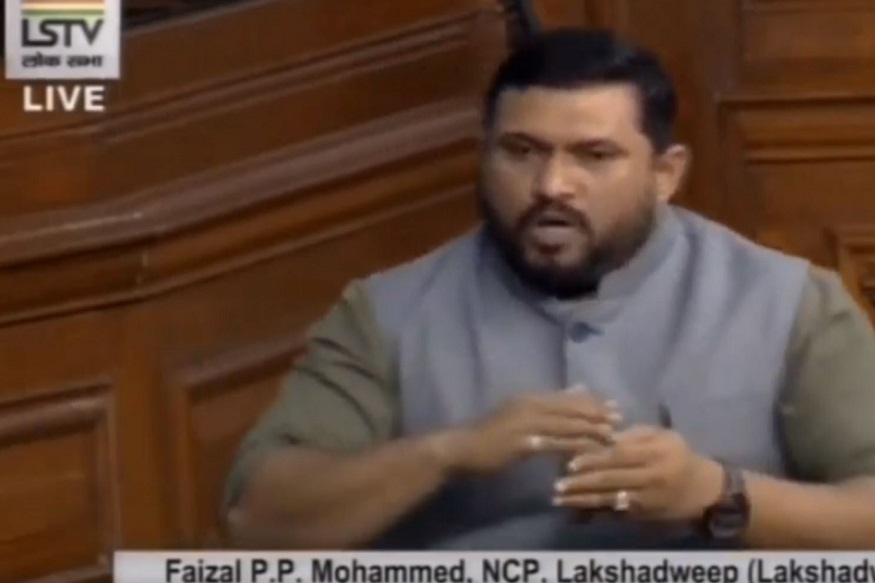 Police stop JNU students at Ber Sarai road as they march towards Parliament.

A Sea of JNU Students March to Parliament | Meanwhile, Jawaharlal Nehru University (JNU) students march towards Parliament over their demand of complete fee roll back along with other demands. Adhir Ranjan Chowdhury says, "It has been 108 days today since Farooq Abdullah was detained. What is this torture? We want that he should be brought to Parliament. It is his constitutional right." He also raises the issue of withdrawal of SPG cover of Sonia Gandhi, Rahul Gandhi and Priyanka Gandhi Vadra.

Rajya Sabha has been adjourned till 2pm after the orbituary references concluded.

AAP MP Bhagwant Mann asks BJP MP and MoS Finance Anurag Thakur, "Is the government willing to acknowledge that the country is going through economic slump?" Aam Aadmi Party MP Sanjay Singh gives notices to raise the issue of pollution in Delhi due to stubble burning in zero hour.


Prime Minister Narendra Modi, in an address before the session started, said the government wants frank discussions on all matters. "It is important that there should be quality debates, there should be dialogues and discussions, everyone should contribute to enrich the discussions in the Parliament," he said. The session will open with obituary references to two members of the Upper House — former Union ministers Arun Jaitley and Ram Jethmalani — and former external affairs minister Sushma Swaraj. Both the Lok Sabha and the Rajya Sabha might be adjourned for a few hours on Monday morning to pay respects to the deceased members.

Prime Minister Narendra Modi in his customary remarks at an all-party meeting on the eve of the session on Sunday asserted that the government is ready to discuss every issue and exhorted everyone to make the Winter session as productive as the last one, when Parliament gave its nod to the bifurcation of the then state of Jammu and Kashmir and nullifying Article 370, besides several other important bills.

Opposition leaders, including Ghulam Nabi Azad of the Congress, raised the continuing "illegal" detention of mainstream leaders in Jammu and Kashmir like Farooq Abdullah, who is also a Lok Sabha member, and said they will take up issues like economic slowdown and unemployment in the session, which ends on December 13.

After the BJP-led NDA left the opposition stunned in the last session by winning over independent regional parties, especially in Rajya Sabha where treasury benches lacked majority, and wooing a number of rival leaders to get a host of bills passed, the Congress-led grouping has some reasons to feel emboldened over recent political developments.

Its better than expected show in the recent assembly polls, BJP's break in ties with Shiv Sena and reports of economic slowdown have put wind in the sails of opposition parties. The 18 Sena MPs in Lok Sabha and three in Rajya Sabha have now been allotted seats in the opposition rows after the party severed ties with its longtime ally BJP and is in talks with the Congress-NCP alliance to form government in Maharashtra.

Despite the setback, numbers favour the treasury benches with the BJP appearing determined to get Parliament's approval on its legislative agenda that was stonewalled in the Modi government's first term when opposition outnumbered it in the Upper House.

The government has listed Citizenship (amendment) Bill, a key BJP plank which is aimed at granting nationality to non-Muslim immigrants from neighbouring countries, for passage in this session. The Modi government had introduced the bill in its previous tenure as well but could not push it through due to vehement protests by opposition parties, which criticised the bill as discriminatory on religious grounds.

The legislation seeks to grant Indian citizenship to Hindus, Jains, Christians, Sikhs, Buddhists and Parsis from Bangladesh, Pakistan and Afghanistan if they have fled their respective country due to religious persecution.

There has been opposition to the bill in Assam and other Northeastern states, where most of these immigrants, mostly Hindus, have been living. The government also plans to seek Parliament's nod to two crucial ordinances. An ordinance reducing corporate tax rate for new and domestic manufacturing companies to arrest slowdown in the economy and boost growth was issued in September to give effect to amendments in the Income Tax Act, 1961 and Finance Act, 2019.

The second ordinance, also issued in September, banned sale, manufacture and storage of e-cigarettes and similar products. This is the second Parliament session of the BJP-led NDA government which returned to power with a greater mandate in the recent Lok Sabha elections.