Parliament Winter Session Updates: Demand for discussion on price rise, unemployment and the situation along the Sino-India border dominated the all-party meeting with the Centre assuring it will take up the issues according to the rules and norms of Parliament.

Parliament Winter Session Updates: The Winter session of Parliament kicked off with a message by the Prime Minister Narendra Modi calling for consensus from all parities to ‘debate and not disrupt’. The Lok Sabha however saw several disruptions, rucks and adjournments in the house. PM Modi also spoke in Rajya Sabha and welcomed the Vice President Jagdeep Dhankhar who was officiated as the chairman of Rajya Sabha.

The Government plans to introduce 16 bills during 17 sittings in the winter session. The Opposition on the other hand seeks to corner the government over a host of issues including the Read More

Separation of Powers Must Be Respected; Scrapping of NJAC Bill by SC Severe Compromise of Parliamentary Sovereignty: Dhankhar in Maiden Speech in RS

Rajya Sabha chairperson Jagdeep Dhankhar in his maiden speech in the House on Wednesday criticised the judiciary for scrapping the NJAC bill, terming it as an instance of “severe compromise of parliamentary sovereignty”, and said the government’s three organs should respect the “Laxman Rekha”.

Leaders from more than 30 parties attended the meeting convened by the central government to discuss the legislative agenda and the issues likely to be taken up during the Winter Session of Parliament that begins on December 7. READ MORE

907 Deaths Due to Lightning This Year: Minister Jitendra Singh

Lightning incidents have caused the most deaths – 907 – so far this year, the government told the Lok Sabha on Wednesday as it tabled the details about casualties due to disastrous weather events. According to information given by Earth Sciences Minister Jitendra Singh in a written reply in the Lok Sabha, disastrous weather events have caused 2,183 deaths across the country this year.

Lok Sabha Speaker Om Birla on Wednesday called upon elected representatives to celebrate India’s G20 presidency which will be used to display the country’s diverse culture to the world. He said there would also be a conference of P20, along with the G20, during which chairmen and speakers of Parliaments in the 20 countries will participate.

The historic NJAC Bill, passed unanimously by the Parliament, was undone by the Supreme Court using the judicially evolved doctrine of ‘Basic Structure’ of Constitution.

There is no parallel to such a development in democratic history of the world. #RajyaSabha #WinterSession pic.twitter.com/54BdgLSs3e

As far as Republic day celebrations are concerned, we have invited Egyptian President Abdel Fattah El-Sisi as the chief guest and he has graciously accepted the invitation, says external affairs minister
Dec 07, 2022 16:50 IST

3 Kashmiri Pundits Among 14 Minorities Killed in J&K So Far in 2022, Says Govt in Rajya Sabha

As many as 14 people belonging to minority communities, including three Kashmiri Pandits, have been killed in Jammu and Kashmir this year so far, the Rajya Sabha was informed on Wednesday. Union Minister of State for Home Nityanand Rai said 180 terrorists, 31 security personnel and 31 civilians were also killed in J&K in 123 terrorist incidents this year so far.

Congress president Mallikarjun Kharge on Wednesday called a meeting of opposition parties at parliament to evolve a joint strategy for the Winter Session of Parliament. Apart from the usual attendees, the meeting featured two unexpected participants – the Aam Aadmi Party (AAP) and the Trinamool Congress. READ MORE

G20 meetings have already commenced in India. Our endeavour is to organise 200 of these meetings in multiple locations in India. G20 summit will be highest profile international gathering hosted by India. We see this as a national endeavour: EAM Dr S Jaishankar in Rajya Sabha pic.twitter.com/hYaQaGtteD

Kashi as First SCO Cultural and Tourist Capital Will Facilitate Showcasing of Our Heritage: EAM

I am happy to inform the House that Kashi has been designated as the first SCO cultural and tourist capital for 2022-23. This would facilitate showcasing of our age-old knowledge inheritance and our cultural heritage, says EAM Dr S Jaishankar in Rajya Sabha
Dec 07, 2022 15:55 IST

Our Advocacy of Dialogue and Diplomacy Has Been Consistent in Ukraine Conflict, Says Jaishankar in Rajya Sabha

PM Modi voiced global sentiment in Samarkand when he said this is not an era of war. His statement was in the context of the Ukraine conflict where our advocacy of dialogue and diplomacy has been consistent & it has a larger resonance as well, said Jaishankar in Rajya Sabha.

Prime Minister Narendra Modi on Wednesday urged all floor leaders to make a collective effort for a productive Winter session of Parliament. Addressing the media ahead of the Winter Session, PM Modi said members of parliament have complained to him that they do not get the opportunity to speak in the House because of disruptions. READ MORE

My special thanks to the PM for his concern for the marginalised. It is a grace for the nation that our President belongs to tribal community. It is a great honour for the tribal community. A son of a farmer is now the Vice President: Rajya Sabha MP PT Usha, in the House pic.twitter.com/Jj5WBldmeW

DMK MP Calls for Equality for the Dead

Speaker Om Birla tells him ‘burial and cremation grounds’ is a State subject. 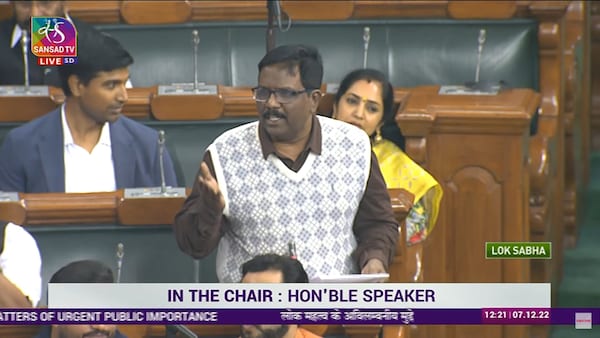 3 Kashmiri Pundits Among 14 Minorities Killed in J&K So Far in 2022, Says Govt in Rajya Sabha

Kashi as First SCO Cultural and Tourist Capital Will Facilitate Showcasing of Our Heritage: EAM

Our Advocacy of Dialogue and Diplomacy Has Been Consistent in Ukraine Conflict, Says Jaishankar in Rajya Sabha

situation on the border with China. The winter session will last till December 29, with 17 sittings over 23 days.

The session is key as just a day after it starts, votes for the Gujarat and Himachal Pradesh assembly polls will be counted. The outcome is likely have a bearing on the proceedings whichever way the results go.  Exit polls had on Monday predicted a big win for the BJP in Gujarat and a dead heat in Himachal Pradesh where most pollsters gave an edge to the ruling party over the Congress.

This Winter session is also likely to be the last session that will be held in the existing Parliament House.

On Tuesday, Union minister and Deputy Leader of Lok Sabha Rajnath Singh chaired an all-party meet where he sought cooperation from all parties for smooth functioning of the session. Leaders from more than 30 parties took part in the meeting, which was also attended by leader of Rajya Sabha Piyush Goyal and Parliamentary Affairs Minister Pralhad Joshi. Demand for discussion on price rise, unemployment and the situation along the Sino-India border dominated the all-party meeting with the Centre assuring it will take up the issues according to the rules and norms of Parliament.