A bill to repeal the three farm laws was on Monday passed in the Lok Sabha and Rajya Sabha amid uproar by the Opposition. 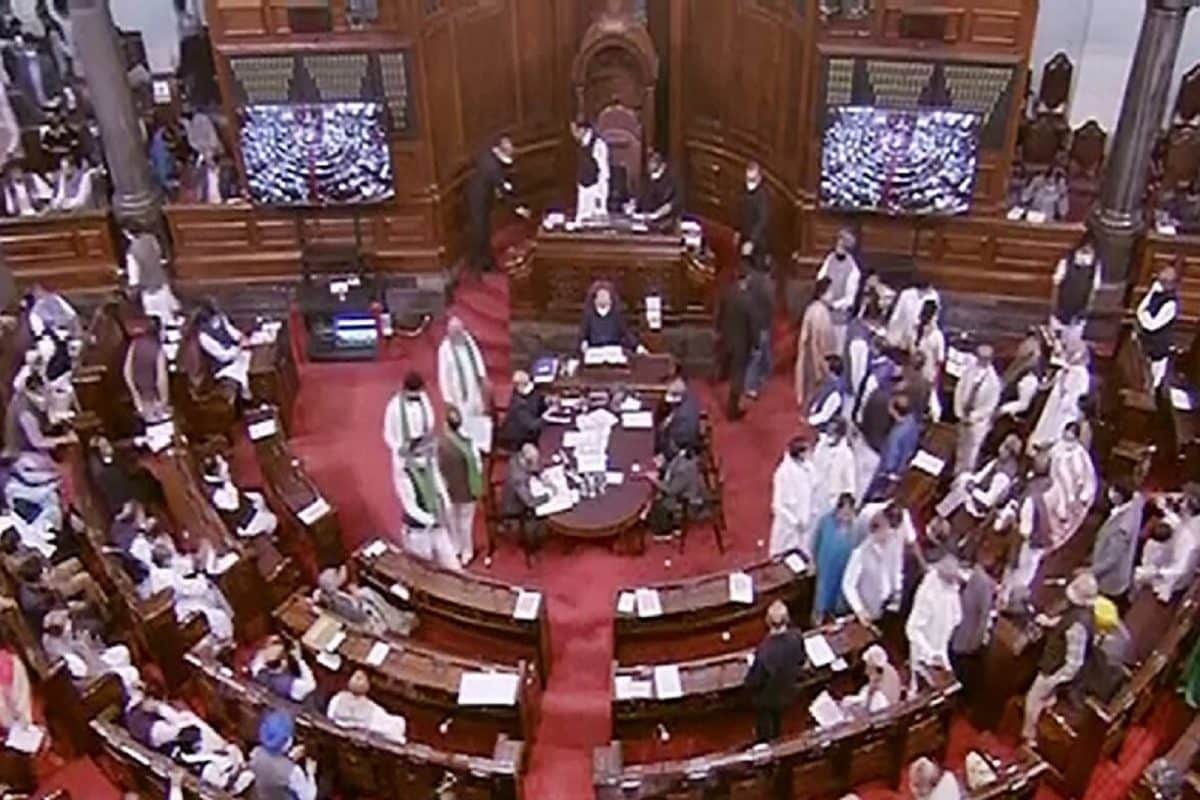 The Lok Sabha was adjourned till Wednesday soon after proceedings resumed at 3pm. The Lower House had been adjourned for the third time on Tuesday.

Meanwhile, Leader of Opposition in Rajya Sabha Mallikarjun Kharge has called the suspension of 12 MPs from the upper house an attempt to shut the voice of the opposition. “Opposition parties are meeting today to discuss future course of action. The question of offering an apology doesn’t Read More

After the intervention of the Lok Sabha Speaker all political parties including Congress and TMC say that they will allow the smooth functioning of the house, sources told CNN-News18.

Some Opposition MPs created ruckus, there was whistling, hooting, one MP had tried to vandalise an LED screen, few MPs attacked women marshals in the last Monsoon Session. Action was needed to protect sanctity of the House: Union min Piyush Goyal on suspension of 12 RS MPs

Rajya Sabha adjourned till 1 December 11 am.

Winter session of Parliament | Lok Sabha adjourned till 3pm. Lok Sabha speaker has called a meeting of all floor leaders to end the deadlock, sources said.

Only Parliament can restore statehood. Both PM and HM have spoken on this issue in detail in the Parliament and to the country. They have clearly stated that after the delimitation process concludes, polls will be held and statehood will be restored: J&K LG Manoj Sinha.

Centre to Soon Introduce Bill to Regulate Bitcoins, FinMin Says 'Crypto is Risky', No Decision on Ad Ban But Will Create Awareness

This is a risky area & not in a complete regulatory framework. No decision was taken on banning its advisements. Steps are taken to create awareness through RBI & SEBI. Govt will soon introduce a Bill: FM Nirmala Sitharaman on Cryptocurrency during Question Hour in Rajya Sabha.

No Revocation Without Proper Functioning of House: Naidu

Top sources told CNN-News18 that eight opposition party leaders led by LoP Kharge met chairman Naidu. They wanted rethink on and revocation of suspended members, but Naidu said it may not be possible without proper functioning of the House and sincere regret by the errant members for their misconduct.

No Steps Taken Yet to Prepare NRC, Govt Says

“The Citizenship (Amendment) Act, 2019 (CAA) was notified on 12.12.2019 and has come into force w.e.f. 10.01.2020. The persons covered under the CAA may apply for citizenship after the rules are notified under the CAA. Till now, the Government has not taken any decision to prepare National Register of Indian Citizens (NRIC) at the national level”: Govt in Parliament

Opposition leaders are holding another meeting in the office of Leader of Opposition in Rajya Sabha, Mallikarjun Kharge, over the suspension of 12 Rajya Sabha MPs.

'We'll Take Our Own Path': TMC

We’re against the suspension of MPs. We’re standing along with opposition parties but we’ll take our own path: TMC MP Nadimul Haque while attending Opp leaders protest at Mahatma Gandhi statue in Parliament premises demanding revocation of suspension of 12 Opposition MPs of RS.

We're against the suspension of MPs. We're standing along with opposition parties but we'll take our own path: TMC MP Nadimul Haque while attending Opp leaders protest at Mahatma Gandhi statue in Parliament premises demanding revocation of suspension of 12 Opposition MPs of RS pic.twitter.com/5maXO1AQiQ

“What happened yesterday is not Chair taking action. It is the House taking action. Go through August 10 records. We named members. You are trying to mislead house, disturbed house, ransacked tables,” RS Chairman Naidu said. Naidu said since the members have not expressed remorse over their behaviour, he refuses to consider the appeal, adding that the nation was anguished over the behavior.

Congress Stages Walk Out, Against Apology Over MPs' Suspension

We have staged a walkout from Lok Sabha to support the 12 Opposition members of Rajya Sabha who have been suspended. The action of suspension from the current winter session points at a ‘retrospective effect’. Why should an apology be issued?: AR Chowdhury, Congress.

We have staged a walkout from Lok Sabha to support the 12 Opposition members of Rajya Sabha who have been suspended. The action of suspension from the current winter session points at a 'retrospective effect'. Why should an apology be issued?: AR Chowdhury, Cong pic.twitter.com/nAgpBVkfZI

The Opposition is protesting in front of the Gandhi statue demanding suspension be revoked.

Rajya Sabha Chairman M Venkaiah Naidu rejects the request for the revocation of suspension of 12 MPs. “The bitter experience of the last Monsoon Session still continues to haunt most of us. I was expecting & waiting for the leading lights of the House to take lead in expressing outrage over what happened in the last Session. Such assurance would have helped me in appropriately handling the matter but unfortunately it will not be”: Rajya Sabha Chairman M Venkaiah Naidu.

Proceedings in the upper and lower houses of the Parliament have begun.

'We Will Not Apologise': CPI MP Binoy Viswam

Congress Gives Notice for Discussion on MSP for Farmers

arise. MPs were suspended against rules of the House,” he said, arriving for the meeting.

Twelve Rajya Sabha MPs were suspended Monday for the remaining part of the session, following the violent scenes witnessed on the last day of the Monsoon Session on August 11.

The letter written by Parliamentary Affairs Minister Pralhad Joshi to Rajya Sabha Chairman M Venkaiah Naidu asking for moving a motion of suspension of the 12 MPs had read, “The 254th Session of Rajya Sabha would indeed be counted as most reprehensible and shameful session in our Parliamentary history. The disgrace caused is irreversible and no amount of condemning and repent can undo the damage it has done.”

“The unruly and reprehensible acts viz standing on the table, throwing files at the Chair, obstructing the Parliamentary Staff from performing their duties, compounded by violent behaviour by some of the Members of Parliament, terrifying and injuring the staff members, has brought disrepute to Indian democracy. These unfathomable circumstances demand exemplary remedies, which would not only act as deterrence against any such future unruly and violent incidents but also endeavour to restore the credibility of Parliament in the eyes of its electorate,” it had read.

Rule 256 says suspension to be taken for a period not exceeding the remainder of the session. The Rajya Sabha chairman had offered to form a committee in the last session to discuss action, but many opposition parties, including the Congress, TMC, and DMK, had categorically refused to become a part of this committee.

The Parliament on Monday had passed the bill to repeal the three contentious agricultural laws at the centre of protests by farmers for over a year with the Lok Sabha and the Rajya Sabha giving their approval in quick succession amid an uproar on the first day of the Winter session without any discussion as demanded by the opposition.

Though the repeal bill was passed by voice vote within minutes of its introduction in both the Houses, opposition members continued their protest demanding a discussion on farmers’ issues, including legal sanctity to Minimum Support Price(MSP) of crops and compensation to families of farmers who died during the year-long agitation.

The Farm Laws Repeal Bill, 2021 now awaits the assent of President Ram Nath Kovind for the formal withdrawal of the three laws against which farmers have been protesting at Delhi borders. Terming the repeal of the farm laws a victory of the protesters, the Samyukt Kisan Morcha(SKM) called an emergency meeting on Wednesday to discuss the future course of action as leaders from Punjab unions asked the Centre to hold discussions and give an assurance on other demands, including a legal guarantee on MSP, in Parliament on November 30.