‘Plan Bee’ is Effective, But Not Scary Enough for Asian Elephants; Railways in Jumbo Fix

Forest guards manning the railway tracks believe that elephants have grown familiar to the sound of buzzing bees. Since the devices are not active bee hives, elephants, being exceptionally smart, have perhaps realized that they are not getting stung by a swarm of angry bees.

Karishma Hasnat
Guwahati: Railway Minister Piyush Goyal had recently tweeted about Indian Railways’ ‘Plan Bee’, calling it “an innovative method to prevent elephants from approaching the railway lines”. The plan was launched in November last year to save elephants from getting hit by speeding trains of the Northeast Frontier Railway (NFR). The mechanism involves installation of devices that emit the sound of buzzing bees at level crossings along the elephant corridors.

It is believed to be an effective and non-lethal way of replicating honeybee pheromones to scare away elephants. According to railway officials, the sound of bees, amplified from loud speakers, leads to increased alertness and swift movement of the elephants crossing the railway track.

At present, NFR has installed the devices at 11 railway crossings in Rangiya division and two more between Azara and Kamakhya junction in Guwahati. The Deepor Beel railway track, which is about 15km from Guwahati, has these devices installed at two gates — NN 273 and NN 274. This wetland situated on the outskirts of Guwahati was declared a Ramsar site in 2002. A Ramsar Site is a wetland designated to be of international importance under UNESCO’s Ramsar Convention.

“We turn on the sound when elephant herds approach the tracks. Once they cross, the device is turned off. The elephants make noises and move fast upon hearing the sound of bees,” said Bhaskara Rao, the gateman at NN273.

At the time of filing this report, elephant movement was last registered on September 11, when a herd approached the railway track late evening, but did not cross it.

“The forest guards on duty tell us about an approaching herd. Sometimes, we learn about their presence from locals. As and when we get news, we inform the station manager who cautions the loco pilots. Trains are required to maintain a speed of 30km/hr while crossing elephant corridors,” said Rao.

The Railways has declared ‘Plan Bee’ a great success with elephant casualties going down over the years. A total of 14 elephants were killed by speeding trains during 2012-2018. In December 2016, five elephants, including two still-born calves, were mowed down by a train around Hojai and Lanka range. In a similar incident, a train ran over four elephants, including a calf at Hawaipur in Lanka, in February.

However, forest guards manning the railway tracks believe that elephants have grown familiar to the sound of buzzing bees. Since the devices are not active bee hives, elephants, being exceptionally smart, have perhaps realised that they are not getting stung by a swarm of angry bees.

“I have been working here since 1990. I have seen a number of train accidents and instances when we found elephants in a dying state after being hit by train. But since 2013, the number of train accidents has come down. The sound of bees makes the elephants move fast. But now, they are getting used to the noise. They are intelligent,” said Uttam Kalita, a forest guard. 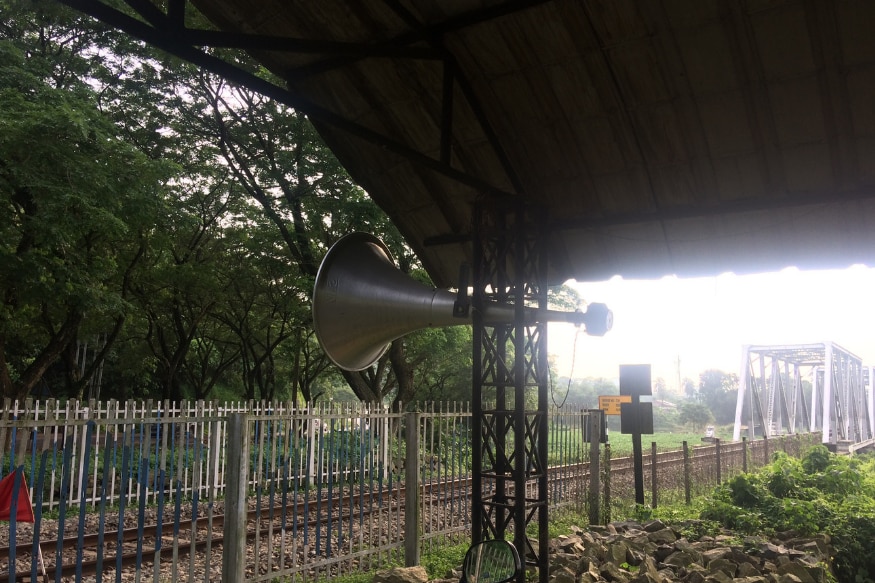 The veteran forest guard, who can detect the presence of elephants from their strong smell, said train accidents could be prevented with the joint effort of the forest department and railways.

“We use torch lights to signal an approaching train about the presence of elephants. The gate man is informed and so is the station manager. This way, we have been able to prevent many accidents. But some train drivers are always in a hurry to move while many others do maintain speed,” said Kalita.

Assam-based wildlife conservationist Kaushik Baruah, who has worked with elephants for over two decades, said that it is not an easy task to chase away elephants from sensitive places.

“Even crackers have now become an outdated mechanism to scare elephants, or prevent them from raiding farmers’ crops. With time, the noise of buzzing bees being played over a loudspeaker will fail to deter elephants from getting near or crossing railway tracks as they will get used to it.

“Conditioning elephants with just sound will not work as these clever giants will soon figure out that the sound of bees is not followed by a sting as it should happen in natural circumstances,” he said.

Even as the numbers are dwindling, railways and forest personnel said that herds of over 80 elephants or more frequent Deepor Beel regularly.

“In case of Deepor Beel, the elephants will cross the track under all circumstances as they have to go to the beel (lake) for their needs,” added Baruah.

NFR chief PRO Pranav Jyoti Sharma said they will look into the matter and find solutions.

“Plan Bee has been a great success so far, and we are planning to install more devices. If the elephants are getting accustomed to the sound, we have to work out a possible solution,” he said.

According to a recent study led by Oxford University research associate Lucy King, Asian elephants are 10 times more endangered than their African cousins but are said to be less afraid of bees. This can be either because bees in Asia are less aggressive or because elephants have different behavioral patterns.

In Kruger National Park of South Africa, an organic formulation containing honeybee pheromones has proved to be effective in safely repelling elephants. In Uganda, authorities have devised a beehive fence deterrent system to chase away African forest elephants.

The system uses trip wires to link beehives together, thus forming a protective fence around the land raided by elephants. When elephants trip the wire, the disturbed bees rise from their hives and successfully scare elephants away.
Tags