After his resounding victory in the Presidential Elections 2017, NDA candidate Ram Nath Kovind has been sworn-in as India's 14th President by Chief Justice of India JS Khekar. Kovind was accompanied by outgoing President Pranab Mukherjee. During the elections, Kovind received 65.6% of the valid votes, against former Speaker of the Lok Sabha – Meira Kumar, the presidential candidate of the Opposition who received 34.35% of the total votes. Kovind received 2,930 votes (From MPs and MLAs) amounting to electoral college votes of 7,02,044 as compared to 1,844 votes with a value of 3,67,314 votes for Meira Kumar.

My heartiest congratulations to Shri Ram Nath Kovind, Hon'ble President of India. Wishing you success and happiness in the years to come.

“People welcome Ram Nath Kovind as the President of India. His humble beginnings and wisdom will guide us towards a New India,” said Union Minister Piyush Goyal

How the event unfolded:

The elaborate ceremony for change of guard in India's highest Constitutional office started today with a gentle knock on the door of President-elect Ram Nath Kovind's Akbar Road residence.

It was Military Secretary to the President, Major General Anil Khosla, inviting 71-year old Kovind and his wife Savita to the Rashtrapati Bhavan, where President Pranab Mukherjee was waiting for them in the study.

The two leaders then went to the grand Rashtrapai Bhavan forecourt where they were escorted to the saluting dais.

Mukherjee took the last salute of the President's Bodyguard (PBG) with President-elect Kovind standing to his left.

He and his successor then drove down Raisina Hill to the Central Hall of the Parliament in a black limousine. Escorting them was grand equestrian procession by the PBG, dressed in white ceremonial uniforms and blue turbans with gold ornamental work.

21-gun salute given in the honour of President Ram Nath Kovind.

President Ram Nath Kovind gets a traditional salute from the President's Bodyguard.

UP: People celebrate at village of President #RamNathKovind in Kanpur Dehat district after being sworn-in as the 14th President of India pic.twitter.com/j7zL4q986U

President Ram Nath Kovind will leave for Rashtrapati Bhavan where an inter-services guard of honour will be given to him in the forecourt and courtesies will be extended to the outgoing President, Pranab Mukherjee. After the tour, Kovind will drop off Mukherjee at his new residence—10, Rajaji Marg.

President Ram Nath Kovind ended his speech saying, “We need to sculpt a high-growth economy, an educated economy and an egalitarian society. This was the vision of Mahatma Gandhi and Deen Dayal Upadhyay.”

"Nation-building cannot be done only through government. The government can only be a guide. National pride is what contributes to nation-building," said Kovind.  "We are proud of every citizen of India and also of even the smallest of livelihoods," he said.

Today, women and men are working hard and standing shoulder to shoulder in all fields of life. Our farmers and scientists work day and night to make us all proud. We are proud of our teachers who are giving good values and educating the generations to come and the soldier who ensures that were are all safe.

Talking about the cultural diversity, President Kovind said, “We are now in the second half of the 21st century... We are proud of India’s diversity, heritage, development, and all its citizens.” "India is full of variety. We are all very different but we are one," he said.

"It was in this central hall that I had discussions with many of you. We've had our agreements and disagreements but we learnt to respect each others' views This is the beauty of democracy. I want people to know that I will fulfill my duties towards them," said Ram Nath Kovind

Honoured to be sworn in as the 14th President of India; would be carrying out my responsibilities with all humility #PresidentKovind

I am accepting this position with all humility and I am grateful for this responsibility: President Ram Nath Kovind

Ram Nath Kovind sworn in as the 14th President of India with Chief Justice J.S. Khehar administering the oath of office in Parliament's Central Hall.

Lok Sabha and Rajya Sabha adjourned to enable members to participate in the swearing-in ceremony of the President. We derive our strength from tolerance; it has been part of our collective consciousness for centuries, President Pranab Mukherjee in his last address to the nation said. 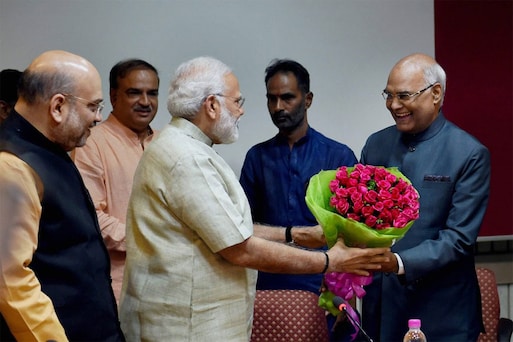