Pulwama Attack Live Updates: Prime Minister Narendra Modi on Saturday warned the attackers that each drop of tear that the families of CRPF jawans have shed will be avenged. "This is the time for patience. But I assure everyone that the perpetrators will not be spared," he said in Maharashtra. Meanwhile, Bengal chief minister Mamata Banerjee is participating in a candlelight march in Kolkata.

The bodies of the soldiers killed in Jammu and Kashmir's Pulwama, which were brought to Delhi on Friday evening, have started reaching their respective hometowns one by one. Huge crowds have gathered to pay respects to the soldiers amid emotional moments.

Union Home Minister Rajnath Singh said on Saturday that due to tremendous response from the people to contribute voluntarily to the "Bharat ke Veer" trust to support the families of the CRPF troopers killed in Pulwama, its website was "getting slow." Taking to Twitter to inform the people who want to contribute to the "Bharat ke Veer" trust voluntarily, Rajnath Singh said, "During the last few days there has been a tremendous response from people wanting to contribute through the website: http://bharatkeveer.gov.in. MHA is grateful for this support."

Meanwhile, the Uttar Pradesh Police on Saturday arrested four people for allegedly making objectionable comments in connection with the Pulwama terror attack in which 40 CRPF personnel were killed. Three of them were arrested for making the remarks on social media and another from Siddarthanagar for allegedly raising pro-Pakistan slogans at a meeting and then posting it on Facebook. One man, who claimed to be a Samajwadi Party supporter, was also arrested for expressing pride over the Pulwama incident.

CLICK TO READ | A Silent Journey: When Pulwama Attack Left Flyers Tearful as They Mourn the Brave Jawans 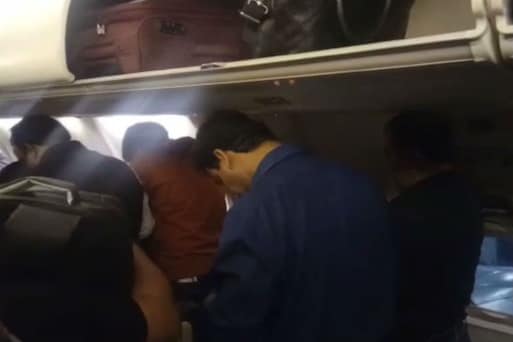 The viral video shows passengers maintaining a minute's silence while their heads are bowed down, in respect to the Central Reserve Police Force (CRPF) personnel killed in Jammu & Kashmir's Pulwama.

UK Issues Travel Advisory | In wake of the grisly Pulwama attack, the UK government has updated its travel advisory for India, warning against travel to Jammu and Kashmir except very limited areas, as Indian-origin protestors gathered outside the Pakistan High Commission in London on Saturday to protest the brutal Pulwama terrorist act in the state. The UK's Foreign and Commonwealth Office (FCO), which earlier condemned the "senseless and brutal act", has warned British nationals to avoid the border areas with Pakistan as well as tourist hotspots. Sources told CNN-News18 that the jawans travelling in bus numbers 2 and 4 had seen bomber Adil Dar drive a red car near the convoy minutes before he rammed bus number 3, reducing it to a mangled heap of blood, flesh and metal.

The Cricket Club of India covered Imran Khan's portrait at its headquarter in Mumbai in the wake of Pulwama attack. CCI President Premal Udani said, "We respect Imran Khan's cricket credentials but at the same time he is Pakistan's PM and we're just showing our solidarity for our forces and our country" The move comes 48 hours after 40 CRPF jawans were martyred in the attack carried out by Pakistan based Jaish-e-Mohamad terror group which operated from across the border.

The Financial Action Task Force (FATF) India is set to press charges against Pakistan. Details of Pulwama attack will be given and India has already provided the deatils of all offices, institutions and training camps run by Jaish-e-Mohammad. Pakistan is laready in grey list of FATF.

India Raises Customs Duty on Pakistan Goods | Export Duty  Upon India's withdrawal of MFN (Most Favoured Nation) status to Pakistan after the Pulwama terrorist attack, basic customs duty on all goods exported from Pakistan to India has been raised to 200% with immediate effect.

Altaf Hussain, the founder of Muttahida Qaumi Movement, a secular political party in Pakistan, said that the Pulwama terror attack 'will throw the regions into flames of war'. Sports Fraternity Stands Shoulder to Shoulder with Slain CRPF Jawans | Former India cricketer Virender Sehwag has offered to bear the educational expenses of children of all the CRPF personnel martyred. "Nothing we can do will be enough, but the least I can do is offer to take complete care of the education of the children of our brave CRPF jawans martyred in Pulwama in my Sehwag International School @SehwagSchool, Jhajjar. Saubhagya hoga," Sehwag wrote on his twitter handle.

CLICK TO READ | There Are Smarter Ways to Bleed Pakistan, Says Retired Lt Gen Amid Calls for Another Surgical Strike 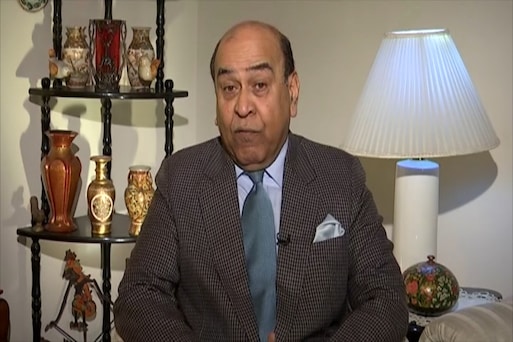 The return of IEDs would lead to much more intense checking of the civil population and further alienation and this what the adversaries want, says Lt Gen (Retd) Syed Ata Hasnain

Slamming the Indian intelligence for its persistent failure to gather prior intel about assailants, Akhilesh Yadav tweeted on Sunday, holding them accountable for the lack of security in Kashmir.

CRPF officers and their family members hold a candle march in Bhopal, Madhya Pradesh to pay tribute to the soldiers who lost their lives in Pulwama attack. London Protests Against Pakistan | Meanwhile, in London, Indian diaspora and friends overseas protest against Pakistan for provinding a safe haven for terror groups. The protest broke out in front of Pakistan High Commission in UK.

A visual from Chorpangra, Baldana as mortal remains of CRPF Constable Nitin Shivaji Rathod are being brought for last rites. John Bolton, assistant to the US President for National Security Affairs, tweeted on Saturday to express his solidarity with India after Pulwama attack. "I expressed condolences to NSA Doval yesterday for the reprehensible terrorist attack on India. Pakistan must crack down on JeM and all terrorists operating from its territory.  Countries should uphold UNSC responsibilities to deny safe haven and support for terrorists," his tweet read.


Bomber Started Tailing Convoy from Jammu | Eyewitnesses have told investigators that Adil, who blew himself up in Pulwama on Thursday killing 40 CRPF personnel, drove a red EECO car. The four escorts in bus number three told him twice of thrice to move away from the convoy, but he kept swerving left and right till he finally rammed into the bus. According to sources, Adil had started tailing the convoy from the Jammu side.

The Andhra Pradesh government on Saturday announced an ex-gratia payment of Rs 5 lakh each to the kin of 40 CRPF jawans killed in the deadly terrorist attack in Pulwama of Jammu and Kashmir. Pledging support to the Centre on whatever action it intends to take to stamp out terrorism, Chief Minister N Chandrababu Naidu said the country would always remember the sacrifices of the jawans.

#Pakistan strongly condemns the Continuing attacks on Kashmiris, in the aftermath of the #Pulwamaattack in #IOK, including #Kashmiri students being systemically targeted in India as the state authorities stay complicit and inactive. #kashmirbleeds (1/2)

L Eswar Rao, a Bhubaneswar-based artist in Odisha, has crafted a miniature of "Amar Jawan" in a bottle using clay and cardboard, to pay tribute to the 40 CRPF soldiers who lost their lives in Pulwama terrorist attack. People in Jammu and Kashmir pay their last tributes to CRPF's Naseer Ahmed at Rajouri who was killed in the Pulwama attack on Thursday. Union Minister Dr Jitendra Singh was also present. Major Killed While Defusing IED | The Major-rank army officer who was killed on Saturday was trying to defuse an Improvised Explosive Device which had been planted by terrorists. The officer is from the Corps of Engineers. The IED was planted 1.5 kms inside the Line of Control in the Naushera sector, Rajouri district, in Jammu and Kashmir.

BJP MP Babul Supriyo lends his shoulder to one of the slain CRPF soldiers who died on Thursday in Pulwama attack. An Army major was killed in an IED blast near the LoC in Jammu Kashmir's Nowshera sector. The incident comes two days after the deadly Pulwama attack.

Major Killed Near LOC | An Army Major has been killed in a IED blast during patrol near LOC in Nowshera sector of Rajouri district in Jammu and Kashmir on Saturday evening. Armymen Receive Bravery Awards Wearing Black Armbands | Wearing black armbands in memory of the CRPF jawans killed in Pulwama terror attack, officers and men of the Indian Army Saturday received awards for bravery in field and anti-insurgency operations from the Eastern Army Commander at a sombre ceremony in Kolkata. "Any loss of life is a sad incident, we are all brothers in arms. We will continue to work in synergy and will not let one or two incidents affect our morale," said Lt Gen M M Naravane.

Pulwama Attack Live Updates: Prime Minister Narendra Modi on Saturday warned the attackers that drop of tear that the families of CRPF jawans have shed will be avenged. "This is the time for patience. But I assure everyone that the perpetrators will not be spared," he said in Maharashtra. Meanwhile, Bengal chief minister Mamata Banerjee is participating in a candlelight march in Kolkata.


Their anger also found resonance at the all-party meeting called by the NDA government to brief the opposition on the terror attack in Pulwama. The meeting ended with a resolution condemning the terror strike. “We stand united in solidarity with our security forces in fighting terrorism, defending India's unity and integrity,” the resolution said. Condemning Pakistan for “actively encouraging” terrorism from across the border, the parties said India has displayed firmness and resilience in tackling it.

After the meeting, Congress leader Ghulam Nabi Azad said he told home minister Rajnath Singh to ask the Prime Minister to meet the presidents of all political parties to chart the future course of action as the “entire nation is angry right now”. He said the opposition will stand with the government to end terror in the country.

Saturday’s meeting was the first-of-its-kind called under Prime Minister Narendra Modi in the wake of a terror attack.

Prime Minister Narendra Modi, who held public meeting in Maharashtra on Saturday, said that the jawans will decide what punishment has to be dealt to the perpetrators of the Pulwama attack. He also launched a scathing attack at Pakistan without naming it and said that it had become a synonym for terrorism.

The announcement on the all-party meeting was made after the Cabinet Committee on Security meeting held on Friday, after which India withdrew the Most Favoured Nation status given to Pakistan to further restrict trade between the two neighbours. Prime Minister Narendra Modi has also warned Pakistan that it will have to pay a heavy price for the attack and said that forces have been given the full freedom to retaliate.

Pakistan-based Jaish-e-Mohammad had claimed responsibility for the attack on Thursday, soon after local youth Adil Ahmad Dar had blown up his explosive laden car near the CRPF convoy on the Srinagar-Jammu highway.

India has slammed Pakistan for stating that it had no role in the Pulwama attack, saying Islamabad could not claim that it was unaware of the presence of terror groups on its soil as the links of such outfits to the country were there for everyone to see.

"JeM has claimed responsibility for the attack. The organisation and its leadership are located in Pakistan. The Lashkar-e-Taiba (LeT) and other terror groups had welcomed the news of the attack and those groups were also based in Pakistan,” the ministry of external affairs said in a statement.