New Delhi: Prime Minister Narendra Modi, with folded and head bowed, walked around 40 coffins draped in tricolour on Friday evening as he led the nation in paying last respects to the Central Reserve Police Force personnel killed in the Pulwama terror attack.

The bodies of the slain jawans reached Delhi's Palam air force area in a special Indian Air Force (IAF) plane in the evening.

The bodies were received by Home Minister Rajnath Singh, who had visited Kashmir earlier in the day.

Decorated with white floral arrangements, 40 coffins wrapped in tricolour were neatly arranged in the hangar, where senior officials of the CRPF laid wreaths one by one in a solemn ceremony, officials said.

Gandhi, who was standing alongside Army Chief General Bipin Rawat, politely asked the general to give way to him for paying his respects, said officials. 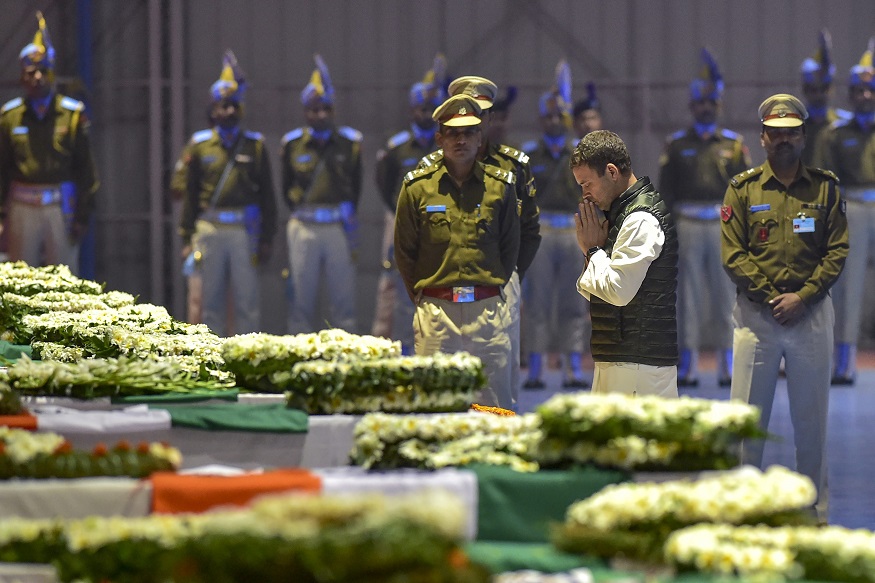 After the dignitaries paid their homage, the prime minister, dressed in white with a dark-coloured shawl, arrived in the hangar and went straight to the podium where the coffins were kept.

He stood in silence for a few moments, before taking a round of the coffins with his hands folded and head bowed.

In the afternoon, Home Minister Rajnath Singh, along with J&K DGP Dilbagh Singh, helped carry the coffin of a slain CRPF jawan after he laid a wreath on the mortal remains of the troops were killed in the attack.

"The nation will not forget the supreme sacrifice of our brave CRPF jawans. I have paid my last respects to the martyrs of Pulwama. The sacrifice will not go in vain," Singh said.

Forty CRPF personnel were killed and five injured in one of the deadliest terror attacks in Jammu and Kashmir on Thursday, when a Jaish-e-Mohammed suicide bomber rammed a vehicle carrying over 80 kg of explosives into their bus in Pulwama district.