Rajasthan Has a New Anti-Lynching Law, But Do Cattle-rearing Meo Muslims Feel Any Safer?

The Rajasthan Protection from Lynching Bill, enacted by the Congress government on August 5, makes mob lynching punishable by a life sentence.

Alwar: Seventy four-year-old Hasbi is sitting all alone in a desolate house. Two weeks ago, Iqbal, her 26-year-old grandson, was accused of slaughtering a cow. Faced with two choices — up to 10 years in prison if convicted or violence at the hands of cow vigilantes — all the men in her large, joint family fled. Hasbi has been left to fend for herself.

“He is a good boy. We are a good family. He has never done a wrong thing,” she insists.

Hasbi’s words will fall on deaf ears. Stories like hers are common in Alwar, the heart of Rajasthan’s Mewat region. For Meos – the Muslim cattle-rearing community that’s spread across the region, being targeted is a daily occupational hazard. After the alleged killers of Meo dairy farmer Pehlu Khan were acquitted by a local court, the fear in the community is palpable.

Sher Mohammed, the head of Meo Panchayat, says it’s not just brutal attacks from ‘gau rakshaks’ that these Muslim dairy farmers risk, but also harassment by the police using the state’s stringent cow protection law to intimidate them.

“Hindutva extremists only pretend to love cows, but we actually care for them. People who depend on the cow are the ones who love the cow. We can’t live without animals, cows included. You should ask all these people that come on live television, how many cows they take care of. If I sell you a cow, they will book you for cow slaughter and they will book me for cow smuggling. Both are made accused,” he says.

The Rajasthan Protection from Lynching Bill, enacted by the Congress government on August 5, makes mob lynching punishable by a life sentence. The law is a welcome move, but justice hasn’t been served in the state’s most infamous lynching case. On August 14, all six men accused of murdering Meo Muslim dairy farmer Pehlu Khan in April 2017, were acquitted. Khan was lynched when he was taking a cow from Jaipur to his home in Haryana. Despite the fact that the crime was recorded on mobile phone cameras and seen by the entire country, the accused have been let off.

“I thank (Chief Minister) Ashok Gehlot for making a law against lynching. That law has deflated these people’s (vigilantes’) brazenness. I am certain there will not be any lynching in Rajasthan for the next five years,” Sher Mohammed says.

At the Alwar district court, Pehlu Khan’s lawyer Akhtar Hussain says his battle for justice will continue. “The laws moves slowly, but it works. I am certain Pehlu’s family will get justice eventually, they should trust the law,” says the red-haired legal crusader.

The anti-lynching law, he says, is futile. “The anti-lynching law will make a difference only if the investigation is carried out properly and the evidence is collected properly,” he says, pointing to how the Rajasthan police bungled the probe in the Pehlu Khan lynching case.

Meanwhile, the two sons of Pehlu Khan — Irshad and Arif — continue to be on trial under the Rajasthan Bovine Animals (RBA) Act. A classic example of how in ‘gau raksha’ related lynching cases — the victims of vigilantism instead of getting justice, find themselves on trial for cow smuggling.

“The RBA has some sections that prevent cow slaughter. Why would someone take a cow to be slaughtered if it is milk yielding? Section 3 (of the act) says nobody will take a cow to be slaughtered nor facilitate its slaughter. Why will anyone slaughter a milk-yielding cow? The burden of proof is with the accused,” Hussain says. “The punishment varies from 10 years under section 3 to 3-7 years in section 5. Section 5 prevents transfer of animals across state lines without requisite permission.”

Back in Agwani village, while Iqbal is absconding, his 16-year-old brother Akbar was allegedly picked up and beaten by the cops. Amroodi Bano, their mother, claims the family has had to pay a bribe of Rs 40,000 to get him free. The money came from selling her jewellery. 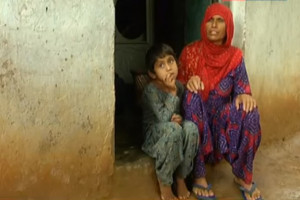 Amroodi Bano, pictured here with her granddaughter, says the family paid a bribe of Rs 40,000 to get Akbar free.

“My son Akbar was sitting at our shop when the cops picked him up. They beat him up and did not let him go till we gave them Rs. 40,000. They let him go a day before Eid. We didn’t celebrate Eid this year. His crime was that he was Iqbal’s brother. They beat him up so much, we had to get him treated in Alwar city. I have been crying since that day,” she says as she tries to hold her fidgety granddaughter still.

Their neighbour Sirajuddin has been helping the women out with chores. He claims Iqbal was not even in the village when the purported crime was committed and that the charge was leveled out of personal enmity. “Iqbal had gone to Alwar to write an exam, there is proof. He has a back injury and can’t even walk properly. Sometimes the Bajrang Dal guys come here to harass us. Even the cops have made several rounds. The family had to run away and leave home behind. There is an atmosphere of fear. When the cops come, children go to sleep hungry out of fear. When someone is guilty, he makes peace with his fate. But when someone hasn’t done anything wrong, it is difficult to come to terms with this.”

In Rajasthan, if you are accused of lynching a man to death, the burden of proof lies on the prosecution to prove that you did, in fact, commit the crime. But if you are accused of cow slaughter and smuggling under the Rajasthan Bovine Animals Act, the burden of proof rests on you. For Meo Muslims, who often lack the means of fighting a long court case, that burden is often too much to bear.

Mohammed Qasim Mewati, one of the leaders of the Meo Panchayat, has been making rounds of villages in and around Alwar to get a sense of how the community is reacting to the Pehlu Khan verdict. He says a feeling of distrust and despair has spread within the community that reveres cows as much as Hindus do. To be labeled a cow slaughterer is a mark of dishonour.

“There is now a feeling of distrust among our people. It will take a long time for the governments to allay this feeling of distrust. Today, if a Meo buys a cow, for whatever reason, he will be accused of cow smuggling or slaughter. This is also a social stigma that they have to face. People are scared to leave the village,” he says.

Devout Muslims, the Meos say their faith puts them in this precarious position. The community is abandoning many of the traditions it used to follow that are common with Hindus, out of fear. “We used to practice ‘Gaudaan’ (the Hindu practice of giving away cows as presents). Fathers would take cows to their daughters who would get married in faraway places. But we have stopped doing that now. It feels like this has been a conspiracy to cut us off from society,” Mewati adds. Abdul Ghani says says he and his 50 cows don’t ever leave the village now.

Six generations of 81-year-old Abdul Ghani’s family have been cattle rearers. The octogenarian says he and his 50 cows don’t ever leave the village now. “We don’t sell or buy cows anymore. The trade has stopped, nobody wants to buy or sell. There is nobody to buy and sell from anymore,” he says as he sits on top of a hill, waiting for the cows to come home.