News18» News»India»‘Why Should I Apologise?’ Rajinikanth Defends Remark Against Periyar, Says He Only Read Out News Reports
1-MIN READ

‘Why Should I Apologise?’ Rajinikanth Defends Remark Against Periyar, Says He Only Read Out News Reports

Rajinikanth addresses the media outside his residence in Chennai. (PTI)

Actor-politician Rajinikanth held copies of the news clippings related to his scathing attack on Periyar EV Ramasamy and said he will not apologise for his remarks on the social reformer.

Chennai: Actor-politician Rajinikanth on Tuesday made it clear that he will not apologise for his statement on social reformer Periyar EV Ramasamy. He also held copies of the news clippings related to his scathing attack on Ramasamy, who is considered father of the Dravidian movement.

The actor, in his address at the 50th anniversary-cum-readers' connect event of Tamil magazine 'Thuglak' on January 14, had said, "In 1971, at Salem, Periyar took out a rally in which undressed images of Lord Sri Ramachandramoorthy and Sita -with a garland of sandal-featured and no news outlet published it."

On Tuesday, Rajinikanth said whatever he said was true and he stands by his statement.

Members of a Dravidian outfit had on Friday accused superstar Rajinikanth of "uttering a blatant lie" about social reformer Periyar, burnt the actor’s effigies and filed a police complaint against him. Over 50 protesters were detained. 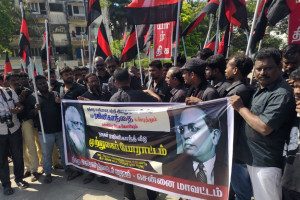 Members of a Dravidian outfit hold a rally against superstar Rajinikanth.

The outfit also sent a petition to the Coimbatore police commissioner to register an FIR against Rajinikanth under sections 153A (promoting enmity between different groups on grounds of religion) and 505 (intent to cause, or which is likely to cause, fear or alarm to the public) of the Indian Penal Code.

The outfit had even planned to lay siege to Rajini's house if the actor doesn't apologise.

“During the Thuglak function on January 14, he (Rajinikanth) had levelled false allegations, not even a tiny bit of which is true. He is only doing this to enter politics. He is trying to disturb Dravidam and Periyar's movements,” Nehrudas told news agency ANI.