New Delhi: As you read this article, lakhs of followers of a self styled godman Gurmeet Ram Rahim Singh are assembling outside a Panchkula court, which is to pronounce a verdict in a 15 year old rape case against Rahim on Friday.

Rahim is fighting a case of rape and sexual exploitation of two women who were then, back in 2002, members of his sect and lived in headquarters of Dera Sacha Sauda (DSS), the sect whose guru Rahim is, in the town of Sirsa in Haryana, about 260 kilometers from Chandigarh.

Apart from the current rape and sexual exploitation case, cases have also been filed in the past against him accusing Rahim of multiple murders and forced castration of his followers.

In the present case, the massive turnout of his followers outside the CBI court in Panchkula has resulted into a huge law and order situation. Schools, colleges and government offices have been closed. Train and bus services have been suspended. The army has been placed on standby. Thousands of personnel of police and paramilitary forces have been stationed in the area. A local stadium has been turned into a temporary jail to accommodate the huge number of Dera Sacha Sauda followers. And the administration is considering placing a ban on internet in the area.

In short, Haryana is bracing itself for a never-before-seen level of violence.

The case first came to light in 2002 when two female followers of Dera Sacha Sauda wrote anonymous letter addressed to the then Prime Minister Atal Bihari Vajpayee, accusing the Dera chief of sexual abuse. Following this the Punjab and Haryana High Court took up the matter and ordered a CBI probe into the incident on September 24, 2002.

Related to these alleged crimes were two other murder charges also. He was accused of murdering a Sirsa-based journalist Ram Chander Chatrapati who had been writing about the Dera's activities in a local paper named 'Poora Sach'. Chatrapati was shot on October 24, 2001 and died on November 21. 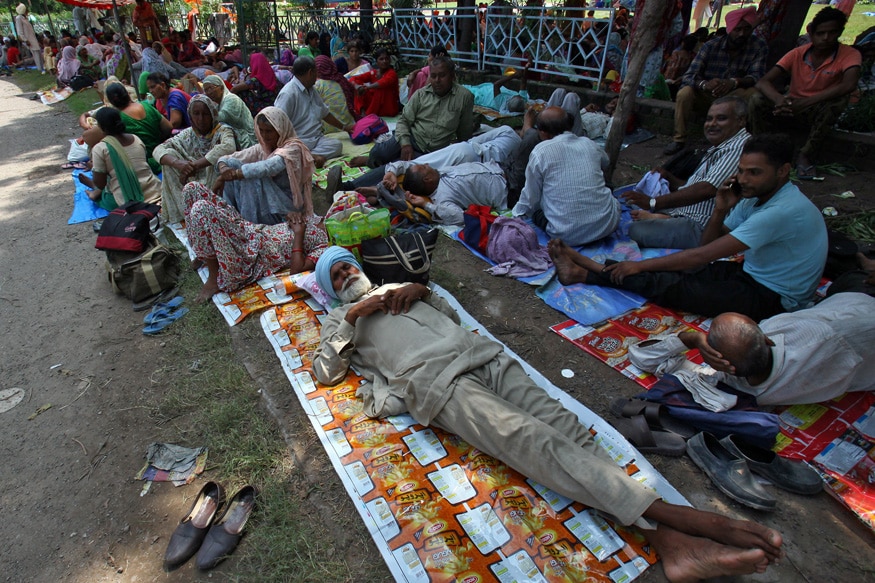 Supporters of Gurmeet Ram Rahim Singh rest as they gather near a stadium in Panchkula in Haryana on August 24, 2017. (Photo: Reuters/Ajay Verma)

Ram Rahim was also an accused in the murder of the manager of Dera Sacha Sauda, Ranjit Singh in July 2002. Then last year Rahim manage to secure a stay on pronouncement of the final order, by a CBI court, from the High Court.

The Dera Sacha Sauda godman has continued to court controversy and be alleged of serious charges since then.

Back in 2007, Ram Rahim had mocked the 10th guru of Sikhs – Guru Gobind Singh by dressing up like him. This sparked violent clashes between Sikhs and Dera Sacha Sauda followers. Bathinda bore the brunt of violence, in which three people were killed and hundreds of civilians and policemen were injured. For around 10 days districts of Punjab were placed under curfew.

Seven more years passed by and Rahim again found himself in another storm. In 2014, around 400 followers of his sect alleged Rahim to have castrated them. The case was handed over to CBI and its investigating team reportedly found substance in the allegations. A Dera Sacha Sauda follower and the only witness in the case Hans Raj Chauhan had told the court that Rahim Chauhan, in his petition, had alleged that he, along with 400 other followers, were lured by the Dera chief to get their testicles removed on the pretext of getting 'an opportunity to meet god directly.'

The same year reports also emerged of arms training being imparted to the followers of Ram Rahim at the sect headquarters in Sirsa. After these reports the Punjab and Haryana High Court ordered that the activities of the group should be monitored periodically.

A year later, in 2015, Rahim again courted controversy when the then censor board chief Leela Samson alleged that the government was forcing her to pass a movie made by Rahim. The film in question was 'Messenger of God', of which he was the lead actor, choreographer, singer, director and producer. Rahim went on to make four more movies in which he played all these roles.
Tags: