Government data analysed by CNN-News18 also showed that the cases of rape in the state dropped below 3,000 for the first time since 2013.

Uttar Pradesh has seen a consistent drop in cases of rape, murder and theft since 2016, a look at official data shows. In 2020, the state recorded the lowest number of cases in each of these crime heads since 2013. 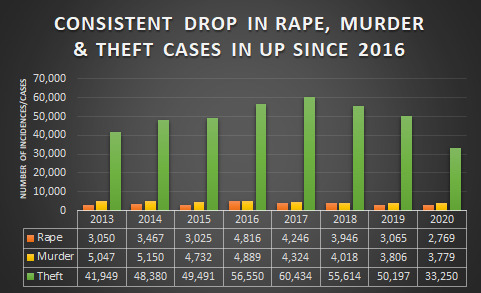 In 2020, the country remained under complete lockdown between March 25 and May 31 due to the outbreak of Covid-19. During that period, the movement in public space was very limited. As per the report, the cases registered under crimes against women, children and senior citizens, theft, burglary, robbery and dacoity have therefore declined, whereas Covid related enforcement has resulted in an increase of cases registered under ‘disobedience to order duly promulgated by Public Servant; under ‘Other IPC Crimes’; and under ‘Other State Local Acts’.