Ratan Tata, who has a following of 3 million on the social media account, put up a status on Instagram inviting questions to which he would reply.

Last Saturday, which happened to be Teachers Day, Tata decided to answer queries from his followers on Instagram. One of the followers asked the legendary businessman what would have been his back up career option.

Tata replied that he would have gladly become an architect had he not lead one of the countries largest companies. 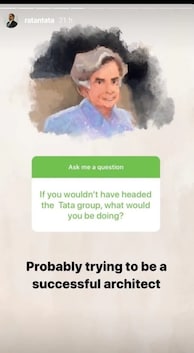 "There are many messages in my inbox that I cannot respond to, but you have some wonderful questions and I would like to answer a few. I understand Instagram has a question-answer feature, so I will try my best to answer some on Sunday evening. I look forward to hearing from you in the QnA story that's added," Tata shared from his account on September 5.

Tata, who has a following of 3 million on the social media account, answered some of the questions on Sunday.

On being asked how to compete when others are not playing fair, Tata replied, “You can still compete effectively if you are fair to all your stakeholders”.

One of his followers asked him if he does Yoga. Tata replied that he does every evening. Tata usually shares words of inspiration or post images from his past. This is not the first time that the Chairman Emeritus at Tata Sons has made clear his love for architecture. During a seminar last April, Tata regretted his inability to practice architecture for long despite a degree in architecture from Cornell University.