Goa is the only state with 100% tap water connections for all its rural households, along with Andaman and Nicobar Islands, Puducherry, Dadar & Nagar Haveli and Daman and Diu. (Photo: PTI File)

With just two years left to achieve the mission, the Centre had asked all states to award all the remaining contracts/tenders for tap water connections by December-end, and hasten the implementation of the flagship scheme announced by PM Modi in 2019

As the December deadline nears, the Jal Shakti ministry held a review meeting with 13 states still lagging behind in implementation of ‘Har Ghar Jal’ and directed them to step up to complete the work. The government’s flagship scheme aims to provide potable tap water connections to all rural households by 2024.

Chaired by secretary, Ministry of Jal Shakti, Vini Mahajan, the crucial meeting held through video-conferencing tracked the progress of the scheme which is now running into its third year. Till date, Goa has emerged as the only state with 100% tap water connections for all its rural households, along with three Union Territories — Andaman and Nicobar Islands, Puducherry, Dadar & Nagar Haveli and Daman and Diu.

Three other states — Telangana, Gujarat and Haryana have also declared to have fulfilled their targets, but are yet to be certified. Punjab (99.9%), Himachal Pradesh (96%), Bihar (95%) and Manipur (74%) are next in line.

Marred first by the pandemic, and then the executional challenges, there are as many as 13 states including the big ones – Uttar Pradesh, Rajasthan, Madhya Pradesh, Tamil Nadu, Karnataka, West Bengal and Maharashtra, which are still far behind the targets. 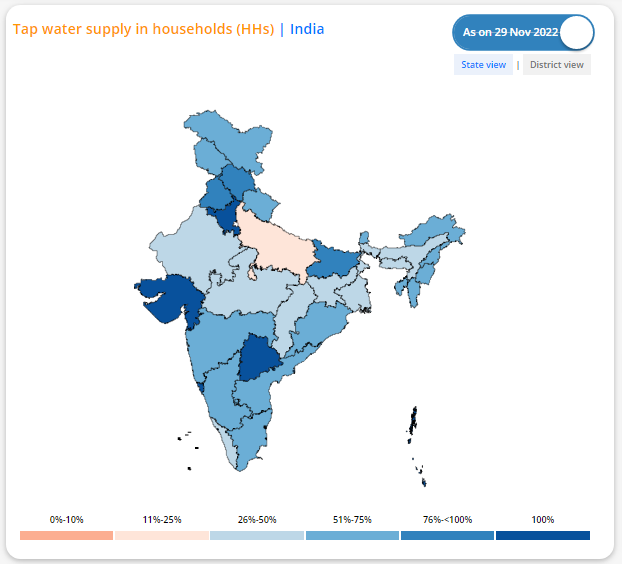 The Jal Shakti ministry had earlier directed the states to ensure that an action plan is prepared for all villages and all remaining contracts/tenders are awarded by December-end. However, as December deadline nears, several states are still far from the completion of work. In Uttar Pradesh alone, the work is yet to start in as many as 64,000 villages with JJM implementation at 21.6%. Neighbouring Jharkhand stands at 25% while it is 33% for Chhattisgarh, 28% for West Bengal, 29% for Rajasthan and 45% for Madhya Pradesh.

According to sources, the ministry has now asked them to set ambitious targets for 2023 and hasten the completion of the mission. Apart from the seven big states, the 13 also include Jharkhand, Odisha, Kerala, Assam, Chhattisgarh and Andhra Pradesh. The 13 states account for 95% of all the residual work under the scheme. The ministry has even announced monthly awards ranking the best-performing districts this November. “All the groundwork needs to be completed by December. The idea is to ensure that they get a head-start on all pending work next year, and gather some momentum,” said a senior official. “All the water resources need to be sustainable – that is the focus.”

The project is set to be a key one ahead of the 2024 Assembly elections, with an overall outlay of Rs 3.6 lakh crores earmarked for it. In last three years, as many as 7.38 rural households have been brought under the scheme. As of Tuesday, over 10.5 crore households — 54.8 % have been covered under the scheme from just 17% when it was initially announced by Prime Minister Narendra Modi in 2019. As many as 125 districts covering 1.6 lakh villages are currently undergoing certification after they declared completion of their target.