Shoes, Bag & Garbage in Hand: How 'Swachhta Diwas' Got a New Twist in Bengaluru This Gandhi Jayanti

While the entire country is participating in cleanliness drive to mark Mahatma Gandhi's 150th birth anniversary, the government's Swachh Bharat Abhiyan got a new spin in Bengaluru.

The 'PLOG RUN' was carried out in 55 different locations with over 7,000 volunteers across Bengaluru (News18)

Bengaluru: This Gandhi Jayanti, the Bengaluru residents woke up to an unusual morning. Thousands of people could be seen running on roads and picking up garbage, in what they said was an effort to 'detox' the IT city. The race was certainly different, but it was a part of the same campaign which was being observed throughout the country — Rashtriya Swachhta Diwas.

While the entire country is participating in cleanliness drive to mark Mahatma Gandhi's 150th birth anniversary, the government's Swachh Bharat Abhiyan got a new spin here.

The Bruhat Bengaluru Mahanagar Palike (BBMP) along with a few city-based NGOs organised a 'PLOG RUN' starting from the Mahatma Gandhi Park on MG Road. But the Plog run wasn't restricted to only this location, it was carried out in 55 different locations with over 7,000 volunteers across the city.

But what is 'PLOG RUN'? Plogging is an internationally known activity which started in Sweden around 2016. It is a combination of jogging while picking up plastic litter. So, while jogging is good for one's health, cleaning litter is good for the planet's health, thus, promoting the government to combine the two.

The event was flagged off by the city's newly elected mayor Gangambike Mallikarjun, the BBMP Commissioner Manjunath Prasad and the City Police Commissioner T Suneel Kumar. Environmentally conscious individuals teamed up with NGOs like 'The United Way Bengaluru', 'Let's be the Change' — among others to participate in this initiative. NCC cadets as well as employees of commercial establishments along MG Road participated in huge numbers.

"This time, we wanted to pass on the message of 'Detox Your Locality' which will then consolidate into 'detox bengaluru'. We want people to believe that there is no harm in picking up trash, moreover, plogging is a full workout for the body as it requires one to bend down or squat to pick up the waste as well as run" said Ramamkrishna Ganesh the chief mentor of the Bangalore Plog Run.

BBMP special commissioner Manoj Meena was happy to put on the cloth-sling bag around his torso and get jogging."80% of Bengalureans want to give back to planet earth, but they don't know what to do, we believe this is a good start and it benefits everyone," he said. 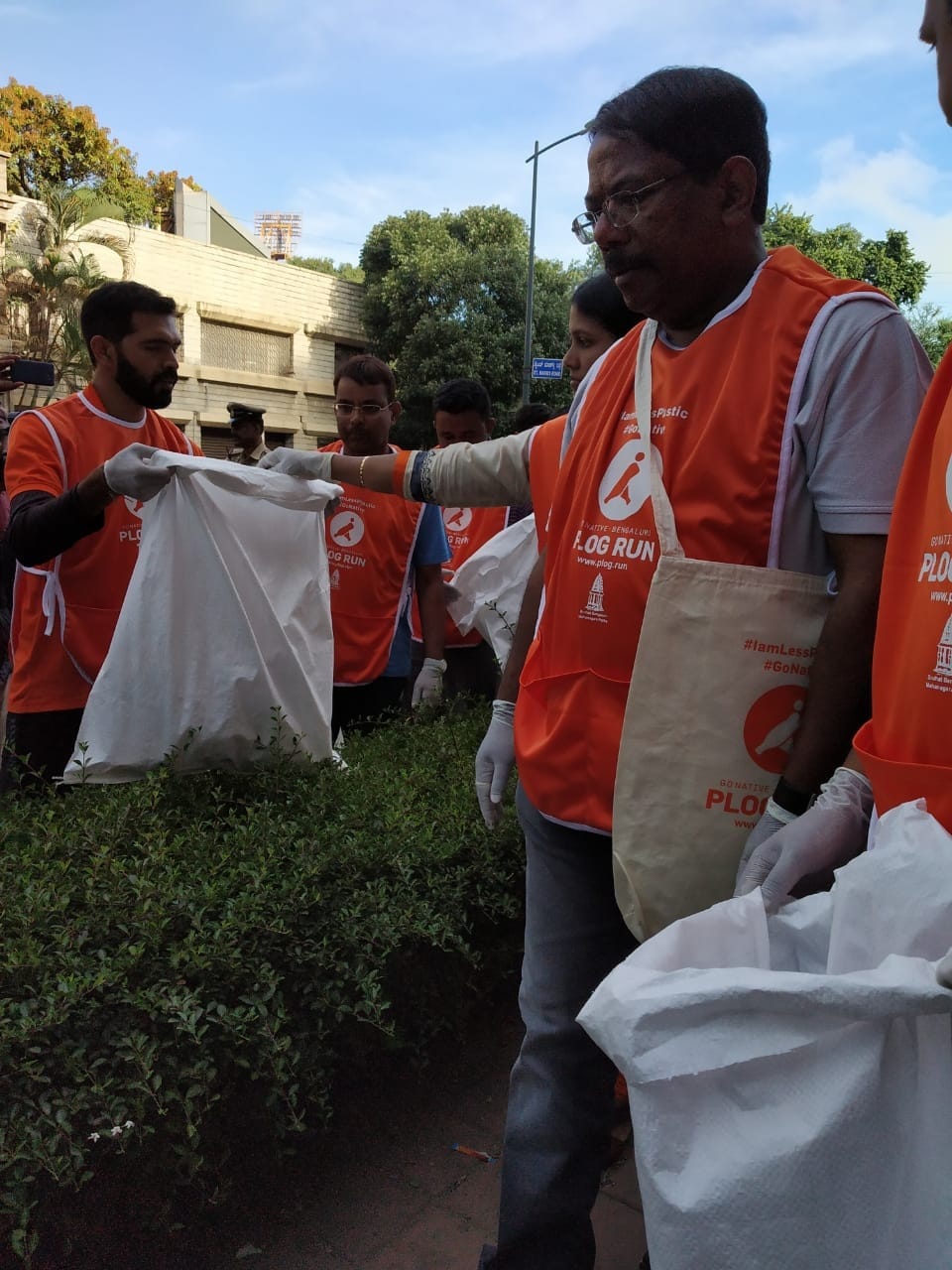 Hoping that this doesn't remain a mere one-day event, the positive response has restored faith in the organisers, who now hope to do such runs every three months in different localities.

"Today we have volunteers in 55 different locations plogging, the idea is not just waste collection we also need to give the message of proper disposal and the importance of recycling. We believe we might touch 30 tonnes of waste which can be recycled, if we do that might be a Guinness record in itself" Ganesh asserted.

"It is great that plogging is gaining popularity and people are doing their bit to clean up the city. Plogging as a culture will ensure fitness, a clean environment and strong community bonding" said another pariticipate Anirudh Dutt

BBMP is on a war-footing to ensure that the city is plastic free, initiatives like the ban on flex banners, no plastic bottles in government functions and even issuing circulars to wedding halls to ensure plastic is avoided by all means.