File photo of a protest by the Maratha Kranti Morcha. (AP)

The Maratha community that once dominated the socio-political landscape in Maharashtra is unnerved by the loss of power, protracted farm crisis and an OBC resurgence that has steadily challenged and upstaged them in the social, political and economic institutions.

The rally was silent but the message was in its unprecedented turnout. On a Sunday, last October, Pune was choc a bloc with a sea of people belonging to Maratha community. Guesses may have varied, but the turnout was in lakhs even by modest police estimates.

“Ek Maratha, Laakh Maratha” (One Maratha is equivalent to a lakh Maratha), read the placards, as the symbol of an assertion that was interpreted in social and political circles in different ways.

Men and women — in fact families unto families; the youth in particular — walked slowly in solidarity with each other, alert to the fact that they needed to be careful towards the members alongside.

They came in hordes, with families, by noon dotting every nook and corner and forming a saffron hue for as long as one could see. There were farmers, builders, doctors, lawyers, rich and poor. The crowd of people dispersed late afternoon as peacefully as they had converged in the morning.

By the evening when Pune reopened to its normal buzz, the streets bore virtually no signs of a flood that had filled the city’s veins only a few hours ago. The streets were cleaner than before; the hoardings had been carefully pulled down; the stickers and banners had been taken off; as if nothing had happened. Tens of thousands of people waving saffron flags are marching through Mumbai demanding quotas in government jobs and education for the Maratha community. (Image: AP)

For a year, such rallies evoked awe for their impeccable discipline and anxiety for their potential socio-political fallout, an unparalleled show of strength but in a fashion that sharply contrasted the violent protests of the Patidars in Gujarat or the Jats in Haryana or the Gujjar agitations in Rajasthan.

A similar humongous rally in Mumbai last week marked the culmination of these protests. The speakers and their content were not as much important as the turnout.

Having begun as a spontaneous show of strength mid-August 2016 from Marathwada, precipitated by the brutal rape and killing in July 2016 of a Maratha girl in Kopardi village of Ahmednagar district, the rallies were replicated by the well-spread community in every nook and corner of the state.

The Marathas — a caste rubric that has been socially and politically dominant in Maharashtra for decades or perhaps last three centuries — have taken to the streets in an expression of assertion in such numbers as to rattle the political epicenter and an entrenched social and political leadership of the community.

Christened as the ‘Maratha Kranti Mook Morcha’ (or Maratha Revolutionary Silent Rally), the rallies are being held under the banner of the ‘Sakal Maratha Samaj’ (All Maratha Community).

Barring a few region-specific variations, the community’s broad demands remain the same. Nothing was spoken. There was no sloganeering. A few local young girls would deliver short but fiery speeches in the end: condemn the Kopardi incident, demand justice for the victim, and hand over a memorandum of demands to respective district collectors that included reservation for Marathas.

Between last first rally and the last, the Devendra Fadnavis-government has managed to diffuse the tension and possible coup against itself. But it hasn’t even begun to realise the meaning of this social assertion, leave aside addressing that. For now, the polity is dealing with the superficial issues. What the state witnessed was a social and political assertion of the Maratha masses — the way the Patels, the Gujjars, the Jats, or the Kammas in the south are doing. 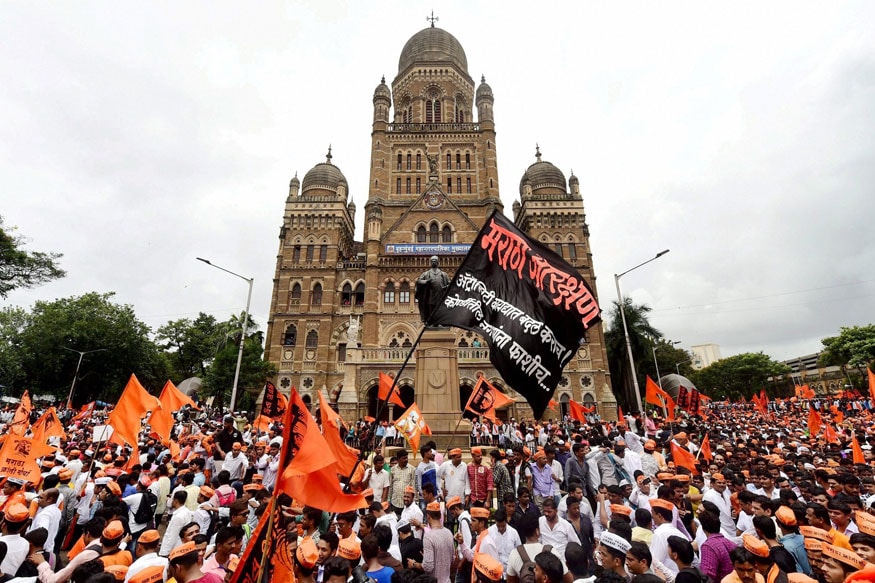 When the state government, the Maratha leaders, the entire opposition, and a well-entrenched social leadership failed to provide respite or support to the struggling mass on the grassroots for far too long, such spontaneous social movements are empirically proved to be an imminent fallout.

The Maratha assertion did cause a ripple among the Dalits and the OBCs, but the social leaders among the community avowedly tried to steer clear of the discourse that would trigger caste animosities.

But the assertion indeed stemmed from the fact that the backward caste groups in the last two decades have challenged the socio-political might of the Marathas from local bodies to the Parliament.

Three events between 1988 and 1993 are at the root of what we see today, I realized based on informal interviews of men and women belonging to the Maratha community over the last year or more to make sense of their protests. For what was astonishing was the turnout of families. I have never seen the protests where families unto families take part — the old, the young, and even the small children. Surely, there is something more fundamental at the root in those rallies that we are not able to understand.

The fast-transforming social, political and economic realities in a highly altered and globalized word have had tremendous impacts even on the Maratha masses from villages to the small towns.

The domination they once enjoyed in social, political and economic institutions has long gone. So while poverty existed then, their social domination compensated for their economic conditions. Not anymore.

These many transformations haven’t been well understood by the political leadership cutting across the party and ideological lineage and the intelligentsia. 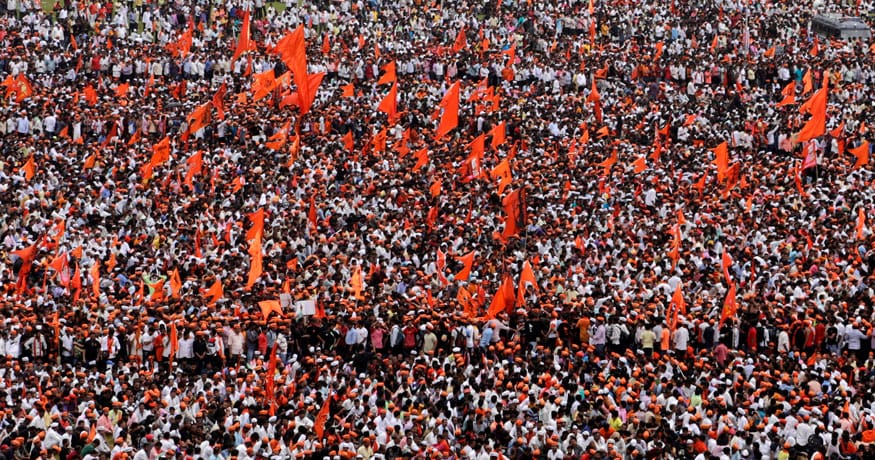 The first event was the implementation of the Mandal Commission’s recommendations; followed by the 1991 economic reforms, and third, the demolition of the Babri Masjid.

The reservation to OBCs in education, jobs and politics shrunk the space that was once solely dominated by the Marathas in administration, social institutions, and politics.

The reforms have ripped apart the cooperative structures hitherto dominated by them and opened by the service sector for other landless and backward class communities; and while the BJP antagonized the Muslims by bringing down the Babri Masjid, the unintended fallout was the consolidation of the lower rung OBCs that has politically cornered the Marathas across Maharashtra.

The Marathas also fear they would turn politically irrelevant if they don’t unite — that signal came in 2014, when in both the Parliamentary and state assembly elections, the Marathas were subjugated to the role of a junior partner in the power-sharing arrangement with the OBCs consolidating behind the BJP and the Shiv Sena in big numbers to tilt the power against a Maratha dispensation.

This explains the near wipeout of the Congress and the NCP in Maharashtra — the two parties did not include or create any space for the OBCs other than the creamy layers. Maratha leaders dominated the previous Cabinets of the Democratic Front governments, with virtually no space for other OBC leaders.

One generation has grown up since the Mandal Commission recommendations came in vogue and the Marathas are realizing that they now have to share spaces once solely dominated by them — this is, according to the Maratha leaders and intellectuals, leading to deep psycho-sociological disturbances within the community. They not only have to compete in the open category with all other communities; they also must dump the aura of the ‘Zamidari class’; the Maratha peasantry is in deep economic crisis.

So there is a new class and caste construct vis-a-vis the traditional narratives, which is why one sees a massive turnout of women in such rallies. As a caste you are on the top, but now increasingly challenged by the lower rung OBCs, the Dalits, and other fringe castes, and as a class, barring those in politics and service sector, the Maratha peasantry is stuck in a sector that can’t fulfill the new aspirations. Keshav Gawade, a 34-year-old farmer from the pilgrim town of Alandi in the district, walked with his six-year-old son in that rally in Pune. He was there for the demand of reservation to his community. “Things have changed,” he told me, “on five acres of land we are 13 dependents; I want my son to get educated and move out.” He wished for an affirmative action for poor Marathas in at least the education sector.

The politics of the rallies revolves around reservation, but would it deliver the succor isn’t clear.

The previous Congress-NCP government had issued an ordinance just before the assembly elections in October 2014, giving reservations to the economically backward classes among Marathas and Muslims, based on the recommendations of a committee set up under the then Industries Minister Narayan Rane.

The Fadnavis-government dumped reservation for Muslims, but retained the decision for the Marathas. It was later challenged before the Bombay High Court and the matter is still pending judicial scrutiny.

What next? Would these rallies, the churning they triggered within the masses, and the energy they raised, lead to anything substantial in terms of social and political reforms within and outside the community?

Those who were involved in the early phase of these protests don’t think this is leading to anywhere, unless a broad social alliance is woven at the grassroots to address the common socio-economic issues.

Agrarian crisis is real; violence against women is not caste-specific, falling education standards affects all and that there are no jobs around is a question mark on the current economic policy narrative — many of the Maratha young intellectuals believe there is a possibility of a broad and protracted dialogue within and with the other caste rubrics, beyond the dominant and orthodox line.

If that does not happen, they fear, the community would stand steadily isolated.

Jaideep Hardikar is a Nagpur-based journalist, and a volunteer for the People’s Archive of Rural India (PARI)