Home » News » India » Since March, Over 1,200 Doctors and Nurses Have Tested Positive for Covid-19 in Major Delhi Hospitals
6-MIN READ

Since March, Over 1,200 Doctors and Nurses Have Tested Positive for Covid-19 in Major Delhi Hospitals

Gangaram, RML, AIIMS have reported highest cases of novel coronavirus infection among healthcare workers. If other staffers, such as lab technicians, nursing orderlies and sanitation workers are taken into account from some of the institutes, the total number balloons over 2,000, unions and hospital authorities said.

Nikhil Ghanekar
Who will take care of the caretakers? This question has continued to stare at major hospitals in the national capital as it sees a surge in Covid-19 cases. Nine major Covid-designated hospitals, both under the Centre and the state government, have seen 1,207 healthcare workers (nurses and doctors) test positive for the infection in Delhi since March.

This data was gathered following conversations with representatives of nurses unions in different hospitals and top authorities of six hospitals. This number includes data from private hospitals as well, based on information collated by the United Nurses Association, one of the largest unions of healthcare workers (HCWs) engaged in the private sector, and Sir Gangaram Hospital, whose authorities confirmed that 313 HCWs had tested positive at the institute.

The actual number of HCWs who have tested positive is likely to be much higher as there is no separate centralised data on them from either public or private hospitals and no data from smaller nursing homes and clinics either. 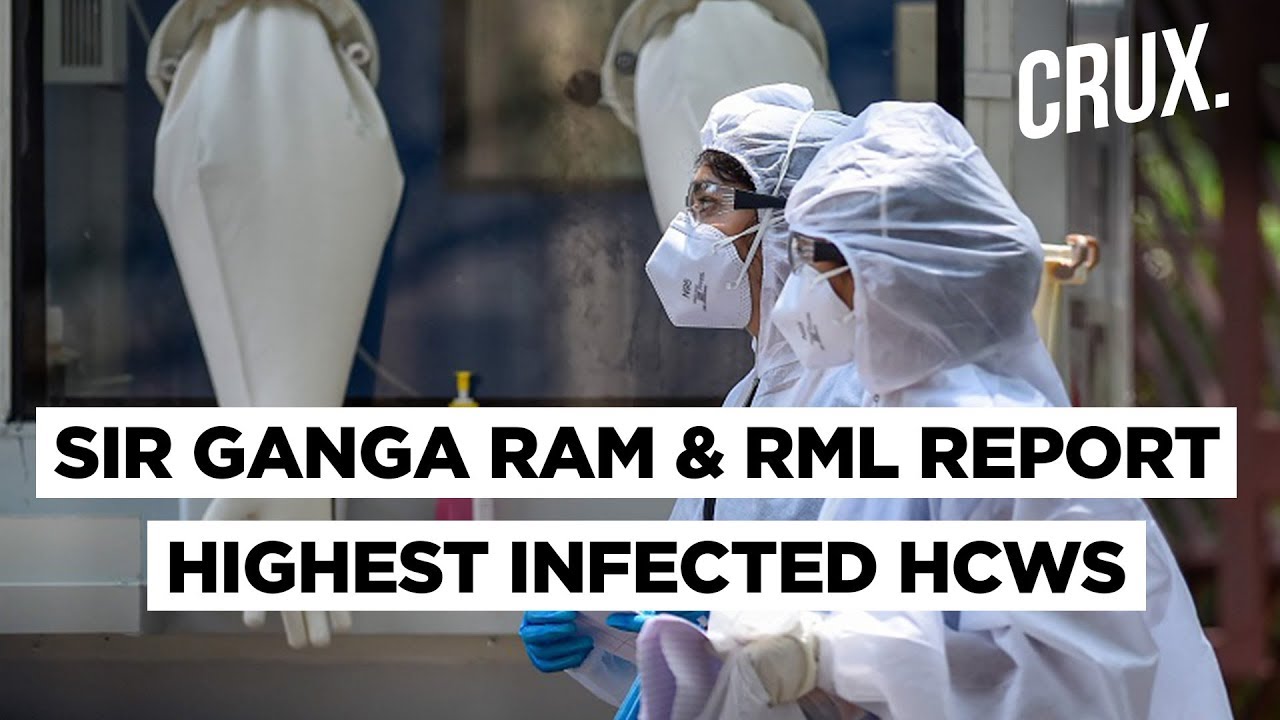 Despite several queries made during press briefings, the union health ministry has till date not revealed how many healthcare workers have tested positive across major cities or hotspots.

If other staffers, such as lab technicians, nursing orderlies and sanitation workers are taken into account from some of these hospitals, then this number balloons over 2,000, unions and hospital authorities said. Many nurses and doctors have recovered and even resumed duty but HCWs testing positive has forced hospitals to rationalise staff duties, leading to added hours in both Covid and non-Covid wards, and fatigue. The nurses assigned to Covid-ward duties also have to undergo mandatory quarantine and thus a rotational duty system has to be put in place.

The data gathered by News18 underscores the strain on hospitals as they cope with the pandemic. As on Friday night, Delhi had recorded 53,116 Covid-19 cases and 3,137 new cases were added since Thursday. Out of the total, 27,512 were active cases, 23,569 persons had recovered and 2,035 had died. Delhi is the third most affected state in the country in terms of cumulative cases and has reported the second highest number of mortalities after Maharashtra.

Among centrally funded hospitals, HCWs who tested positive were from Ram Manohar Lohia Hospital, All India Institute of Medical Sciences (AIIMS), Safdarjung Hospital and Lady Hardinge Medical College. A hospital-wise break-up of Covid-positive HCWs in private hospitals could not be obtained from the United Nurses Association (UNA).

Here are the details on the number of healthcare workers who have tested positive in top hospitals of the Delhi government and central government. This also includes consolidated data of Covid-positive HCWs from private hospitals. 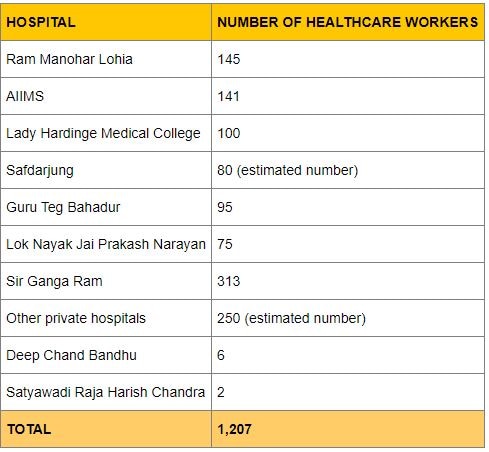 For nurses and doctors on the front line, the pandemic has been relentless. It has led to anxiety and fear as the risk of exposure is double-edged, at the workplace as well as outside the hospital premises. The issue of sufficient supply of personal protective equipment (PPE) remains a sore point whereas long working hours wearing suffocating PPE and uneven duty rotation have led to growing frustration and fatigue. Just last week, the AIIMS nurses’ union ended its relay protest over issues of long duty hours and establishment of proper PPE donning and doffing area. Similarly, on Thursday, nurses in a few private hospitals threatened to go on strike and some have already resigned on grounds of PPE shortage.

“Our usual duty is of six hours and if you take into account time taken to wear and take off PPE, it takes more time. The duty should be of four hours. Dehydration and fatigue are some of the major issues and it is leading to a drop in our efficiency,” said a member of the AIIMS nurses’ union on the condition of anonymity.

“It is difficult to say where the healthcare workers have picked up the infection. On any given day, the number of staffers who are in quarantine or under treatment is not more than 30, so we are able to manage with available resources thus far. We have also provided our staff with the option of using our hospital accommodation, especially for those who are working late hours and for those who may not want go back to their families,” said Dr Sharma.

The duty hours are longer and more hectic at LNJP hospital, which has been under fire after videos of corpses lying in its corridors came to light. The Supreme Court took suo moto cognisance of the matter and, on Wednesday, pulled up the Delhi government for taking action against doctors who documented the poor conditions at the institute.

"The donning and doffing area is a high-risk area for the nurses. We have trained nurses to be extra-cautious while going through this process, especially during doffing, meaning while taking off the PPE. PPE should be taken off at the exit point of ICU or ward and the mask only after exiting the patient care area," said a senior nursing officer at Safdarjung hospital who did not want to be named. The institute's medical superintendent did not respond to queries mailed to him.

At LNJP, nurses had to protest in April to get accommodation during their quarantine period, to protect their families from infection. The hospital had made arrangements for doctors at the hotel The Lalit whereas nurses were put up at the dental college in the hospital premises. After many protests, they were given accommodation in a Gujarat state guesthouse near Kashmere Gate and arrangements were also made in hotels in Karol Bagh and Daryaganj.

Similarly, the nursing staff at RML has been provided accommodation in hotels across Karol Bagh; some are even put up as far as Mahipalpur and Nawada. “The food provided in these hotels is just about average. It comes pre-packed. Sometimes we really crave for some fresh and piping hot home food but that is not available”, said a senior nurse from RML Hospital on the condition of anonymity.

‘Trying to Manage With Available Resources’

Hospital authorities said that HCWs testing positive is certainly posing a challenge to manage the resources at hand. The problem, authorities said, is compounded by the possibility of HCWs getting infected outside the hospital too, while commuting or around their homes. “They have been trained, re-trained on PPE, infection control and relevant protocols. We are providing accommodation to those who are working in red and orange zones,” said Dr NN Mathur, director, Lady Hardinge Medical College & Smt Sucheta Kriplani and Kalawati Saran Children's Hospital.

Dr Suresh Kumar, medical director of LNJP Hospital, said, “We have made a separate ward in our hospital for our staff who have tested positive. In the ICUs there is risk of exposure to aerosols and secretions and staffers working there are in danger. One of our doctors is in the ICU on ventilator support. There is also risk of exposure in medical wards where patients of multi-organ failure are admitted. Besides, sanitary workers are also at high risk.”
Nikhil Ghanekar