Voting is underway in first phase of Gujarat elections. (Network18)

New Delhi: Almost half of Gujarat is voting in the first phase of Assembly elections which will decide the prestige battle between PM Narendra Modi and soon-to-be-Congress chief Rahul Gandhi. A number of images stood out within the first few hours of polling. Three generations of a family stood early morning in line to cast their vote. 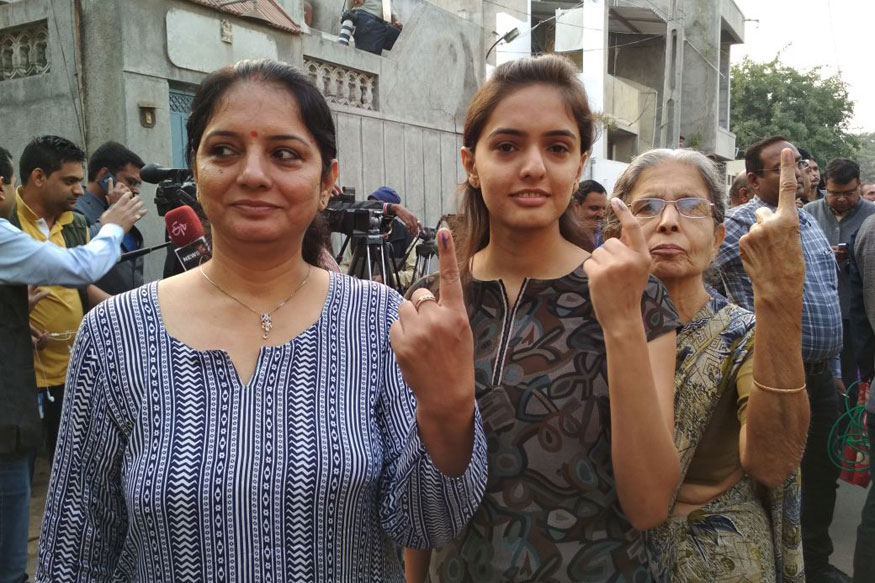 Ajiben Chandravadiya, who claims to be 126-year-old, cast her vote at a polling booth in Upleta. According to the woman’s voter ID card, she was 116 years in 2007. EVM glitches were reported from Porbandar, Surat, Jetpur (Rural Rajkot) and Valsad, with the Congress claiming that those in Booth No. 145, 146 and 147 were connected via Bluetooth.

Have replaced two machines and one VVPAT, you cannot really call it a technical error, these are electronic items there can be some issues. Now everything is okay & voting has started: Vipul Goti, Master Trainer, Election Commission in Surat's Varaccha #GujaratElection2017 pic.twitter.com/RVF86aW4Wh — ANI (@ANI) December 9, 2017

An Election Commission official, however, said there was no technical error. "We have replaced two machines and one VVPAT, you cannot call it a technical error. These machines are electronic items that can have issues. All issues have been sorted out and voting has returned to normal."

Soon-to-be Congress President Rahul Gandhi urged voters to exercise their right and tweeted saying, "Participation of voters is the soul of democracy. My young friends who are voting for the first time in Gujarat Elections are welcome and congratulated. The people of Gujarat are appealing to make this festival of democracy successful by voting in large numbers."

The Congress scion later boarded an IndiGo flight from Delhi to Ahmedabad, queuing up with common passengers from the bus to the aircraft. Prime Minister Narendra Modi took to Twitter as the voting began. “Phase 1 of Gujarat polls begin. Urging all those voting today to turnout in record numbers and vote. I particularly call upon youngsters to exercise their franchise.” As the voting for phase 1 progressed, Modi moved on to round 2, addressing a rally in North Gujarat's Lunavada which will vote on December 14.