Snakes, Heavy Rain, Risky Paths: How All-women Team From Meghalaya Braved it All to Ensure Vaccination

Monsoons in Meghalaya are testing. Vaccination programmes can become extremely challenging, especially with intense heat, humidity and no network connectivity.

On the banks of river Jadukata close to Bangladesh, Ranikor is 56 kilometres from Shillong. Surrounded by rock cliffs and covered by dense forests, remote Ranikor is an ideal escapade from the maddening crowd. However, during monsoons, Ranikor turns into the most inaccessible terrain led by hostile roads and an arduous journey.

In the mid week of July, five vaccination teams comprising of all female members decided to take the vaccines to the residents in remote villages of Kulang, Amarsang, Thadteja and Pormawdar of Ranikor in West Khasi Hills district of Meghalaya. Incessant rains, slushy roads and the treacherous terrains not only impeded the residents of these villages along the Indo-Bangladesh border to reach the vaccination centres, but hindered the health workers’ visit.

The officer in-charge of the Nonghyllam Police Station offered to send police personnel along with the all-women team. Prepared for the adversities ahead, the team started their journey on foot at 5.30am. They first reached Kulang, one of the villages, at around 8 am. However, on the way to Pormawdar, the team encountered heavy floods. Overcoming the initial reluctance, the determined women decided to move ahead. Braving the gushing red water they waded through the floods with their vaccine kit and strong will to reach the village at around 11 am.

To hasten work, the teams then decided to split and proceed as two units on one mission. One headed for Amarsang and the other towards Thadteja village. After trekking for almost three hours, one of the teams reached Amarsang village. It was 2 in the afternoon by then. The team for Pormawdar took couple of hours more. The adventurous journey across steep hills, valleys, dense forests, with heavy backpacks comprising of AEFI kits, anaphylaxis kits, stationeries, packed food, vaccine carriers, among other essential items was not easy.

“We even joked among ourselves as to who received the highest number of leech stings as we encountered many leeches and snakes as well on our journey. Despite the odds, our teams managed to vaccinate a total of 147 beneficiaries in all these villages. We made our way back on foot to Pormawdar and back to Kulang by 11:00 pm the same night, and finally reached Ranikor CHC at around 1:30 am of the following day," said Dr. (Miss)Patmos Warjri, medical officer in-charge.

For vaccinators in remote areas, like the ones falling under Ranikor CHC, several villages are difficult to reach, even during normal circumstances. And monsoons in Meghalaya are testing. Vaccination programmes can become extremely challenging, especially with intense heat, humidity and no network connectivity. 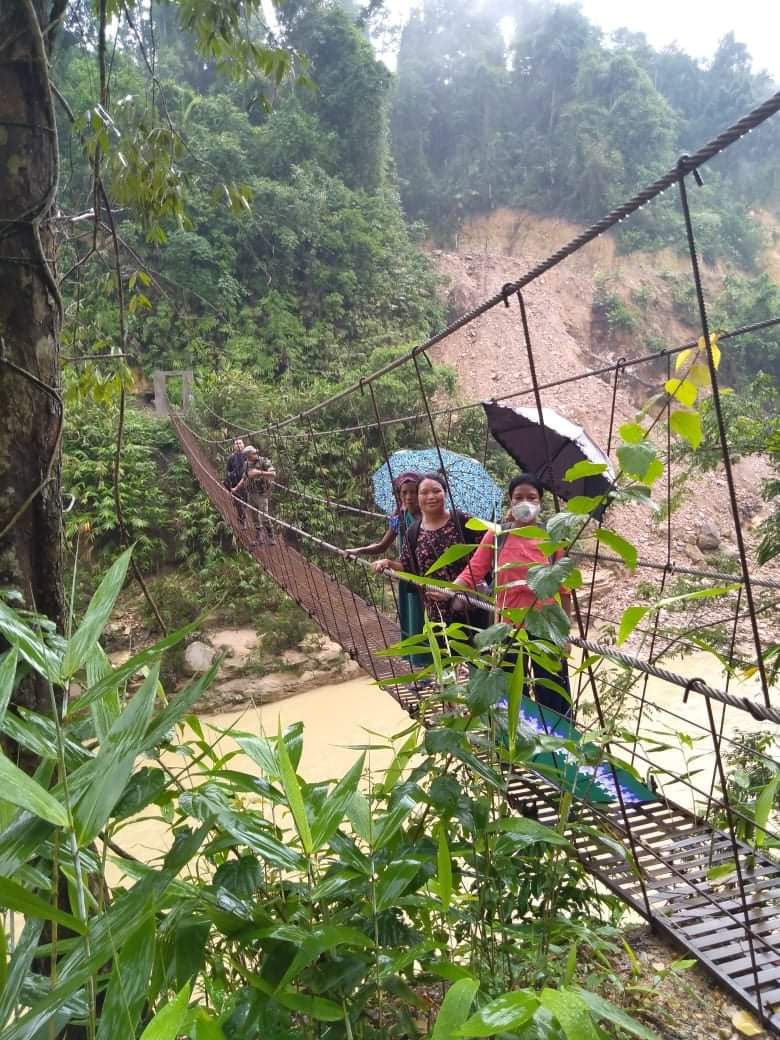 “Vaccinators may return from session sites as early as 6:00 pm and as late as 11 pm on a daily basis, depending upon the distance of the session sites from CHC", says the medical officer.

However, what made this particular vaccination attempt enduring was that it was the third attempt on the part of the vaccination teams to reach these villages, as the region remained desolate owing to unfavourable weather. The tenacious women never let go off their resolute and after two unsuccessful attempts, it was now the time to smile. A moment to cherish and an opportunity to emerge as the “Heroes of the Mission Vaccination”.

Meghalaya as on July 18 has 57,000 cases with 51,981 recoveries and 939 deaths. The state off late has witnessed a spike in Covid cases and the rate of vaccination too is an area of concern for the state government. In the virtual meeting with the chief minister of the northeast, Prime Minister Narendra Modi has expressed his concern about the vaccination in the northeast states, including Meghalaya.

With the percentage of vaccination in the state much below the national average, Meghalaya Chief Minister Conrad Sangma conveyed to Prime MInister Modi that legislators and elected members of tribal councils have been roped in, as part of the state governments mission-mode approach, to ramp up the vaccination drive.

Nothing can deter the spirit of our frontliners who are set to conquer the last mile vaccination challenge in remote villages in MeghalayaRanikor CHC Team took the #COVIDVaccination to villagers who were unable to come for vaccination due to heavy monsoon rains@mansukhmandviya pic.twitter.com/DJPAiHic1t

The Chief Minister hopes that the state will be able to administer 20,000-25,000 COVID-19 shots daily and fully vaccinate all the eligible population by the end of September or early October.