File photo of doctors wearing protective gear gather to take swabs from the residents to test for coronavirus disease (COVID-19) at a residential area in Ahmedabad. (Reuters)

In India, 452 of the total 736 districts have been affected by Covid-19 — which is a little more than three-fifths of the total districts in India (61.41 per cent). Population-wise, 77.53 per cent Indians living in these districts are at risk of contracting the infection.

However, there are certain districts which have reported a very high number of cases and deaths, and have been defined as ‘Hotspots’ or ‘Red Zone’ areas.

Amitabh Kant, the high-profile IAS officer and NITI Aayog CEO, tweeted a list of 15 such severely affected districts critical to the fight against Covid-19.

We analyse this list and study the number of cases, mortality and causes for spread in each of these 15 districts. 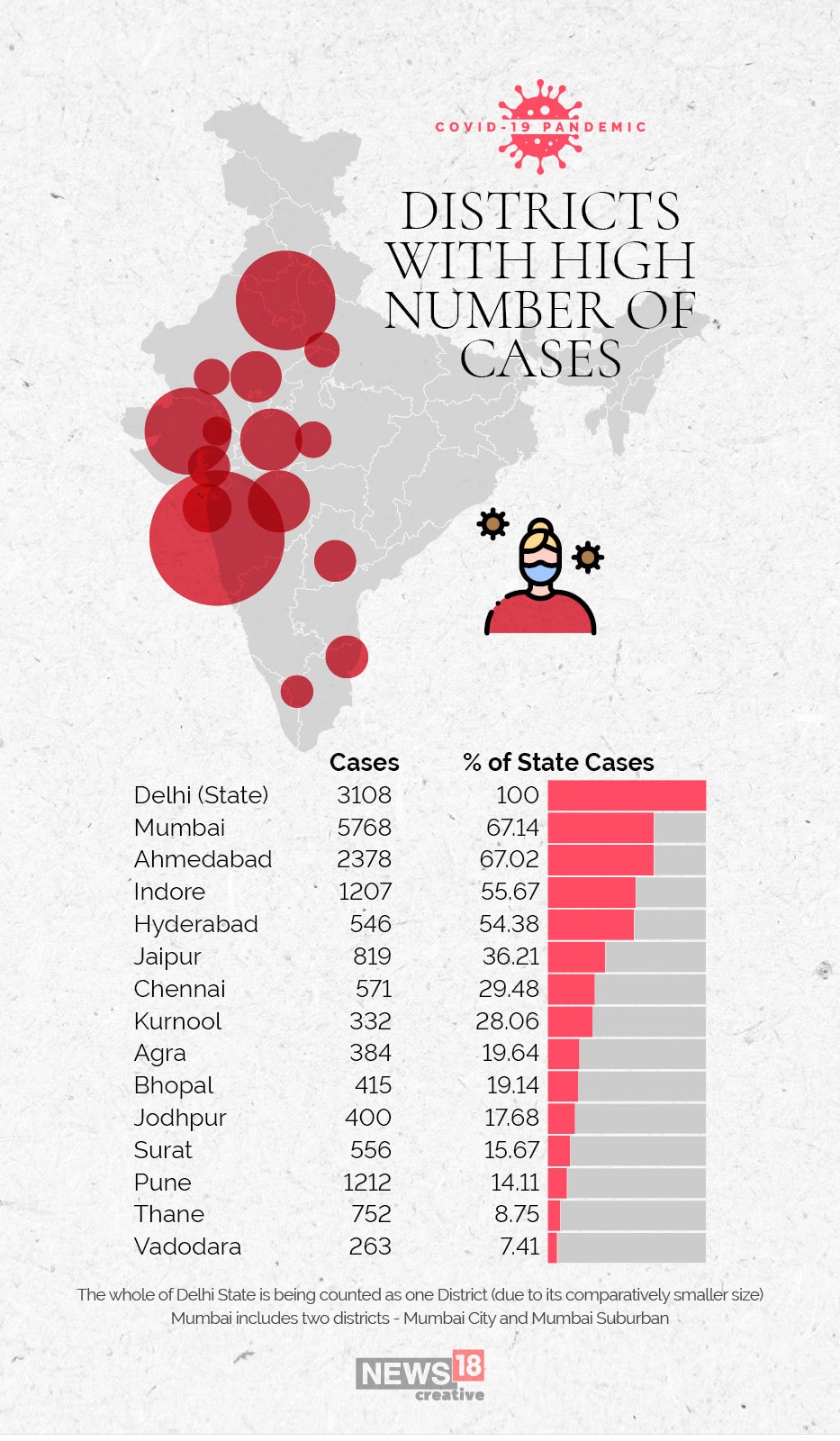 Mumbai has reported more than two-third of the total cases in Maharashtra. Not only does it have the highest number of cases for any district in India, by some margin it has the largest percentage of state cases (not counting Delhi as we have considered the whole state as one district in this analysis). Being the financial capital of India only compounds the problem for the country.

A high density of population is one of the major reasons for a high number of cases in Mumbai. Interestingly, intensive contact tracing and aggressive testing of a large number of high-risk individuals are some other reasons, according to the BMC.

Ahmedabad has also recorded more than two-third of the cases in Gujarat. One of the major worries for the city has been the spread of the virus through super-spreaders — as many as 40 of them have tested positive over the last few days. These mostly include vegetable vendors, milk vendors and kirana store workers.

Together the three big cities Ahmedabad, Vadodara and Surat account for 90.11 per cent of all the cases in the state of Gujarat.

Indore, which was ironically ranked the cleanest city in India for the third time in a row last year, accounts for just over 55 per cent of all the cases of Madhya Pradesh. The local administration is facing criticism for how they dealt with the pandemic in the initial stages, testing only those who arrived in the city by air via Maharashtra, Rajasthan and Gujarat after returning from abroad, and ignoring those who came to the city via rail and road.

The change of government in the state and the period of uncertainty with all the political drama that unfolded in March is also being reported as one of the major reasons for the rise of cases in major cities like Indore and Bhopal (together the two cities account for 75 per cent of the cases in the state).

Delhi has reported more than 3,000 cases of which at least a third are linked to the Nizammudin Markaz event. New Delhi, with 734 cases, tops the district charts in Delhi. 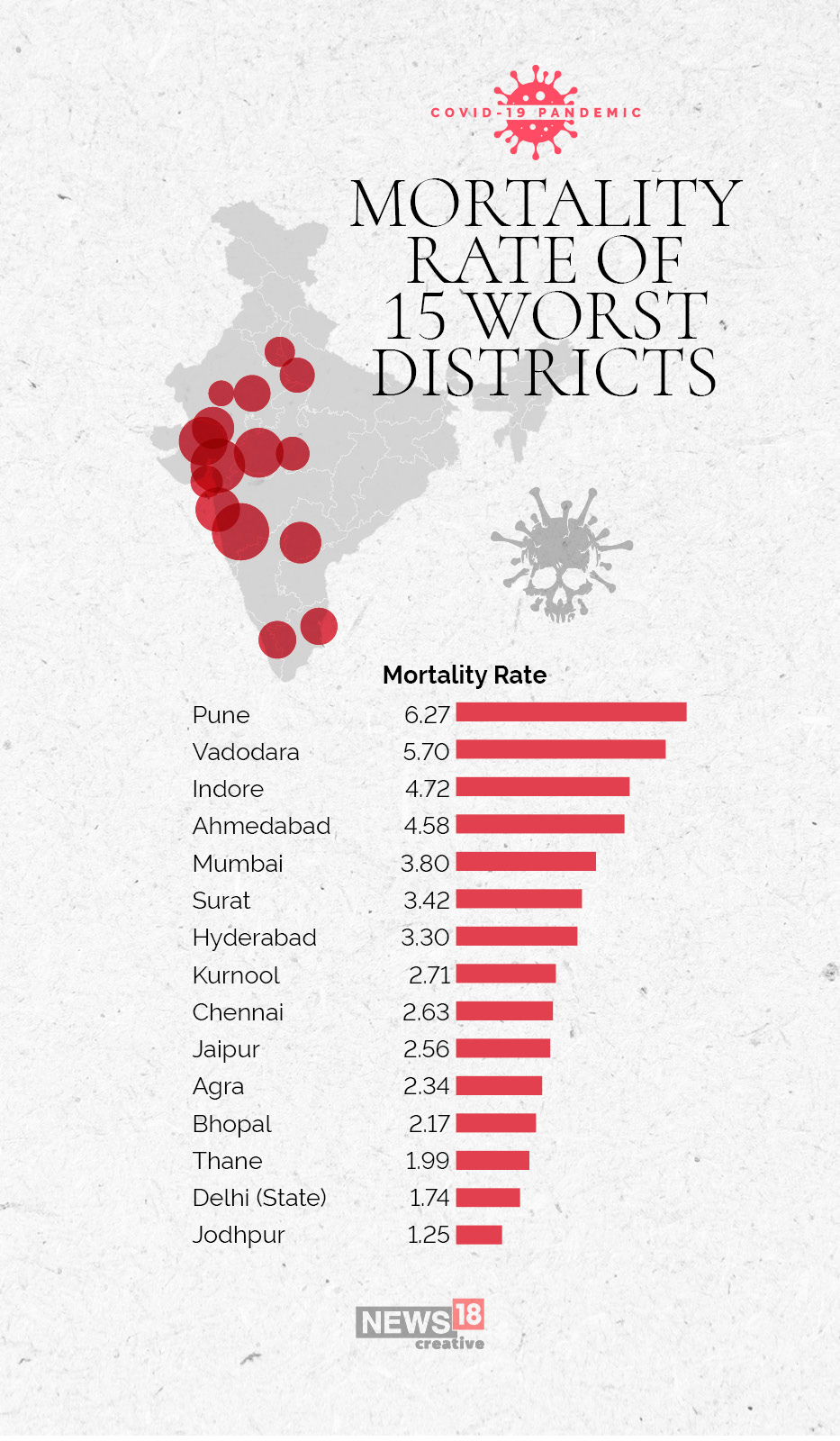 Mumbai and Pune together account for 80 per cent of the total deaths in Maharashtra.

Mumbai has reported almost one-fourth of the deaths in the country — 219 of the 937 deaths (23.37 per cent) have come from one city alone. A large number of hospitals in Mumbai shut after staff members contracted the virus. This, coupled with a lack of ICU beds, is one of the major reasons for the high number of deaths in Mumbai.

Pune has the highest mortality rate of 6.27 per cent in the country among the districts analysed. 76 of the 1212 positive cases have died in the city. However, a silver lining for Pune is that the rate has significantly fallen from 9.1 per cent on April 17.

Ahmedabad is the only other district where the total number of deceased has cross 100. It accounts for more than two-third of the total number of deaths in Gujarat (67.28 per cent). Its mortality rate of 4.58 per cent places it in the worst cluster of districts and is higher than the National Average of 3.1 per cent.

Particularly disconcerting for Gujarat is the high mortality rate of another prominent city of the state — Vadodara. At 5.7 per cent, it is the second-highest amongst these 15 districts. Three of the worst six districts in terms of mortality rate are from Gujarat (the third being Surat).

Indore accounts for a little over half of all the Covid-19 deaths in Madhya Pradesh with a high mortality rate of 4.72 per cent. What is concerning for the state authorities is the sudden surge in deaths in the three nearby districts of Ujjain, Khargone and Dewas. Together, these four districts account for approximately 85 per cent of the total deaths in Madhya Pradesh (total 52 districts). A big reason for the rise in mortality in the state is the late reporting and hospitalisation due to the stigma involved with contracting the virus.

Another possible explanation is the severe strain of the virus to hit both Indore and Ahmedabad. Scientists at the Gujarat Biotechnology Research Centre (GBRC) believe that the L-type strain of Covid-19, which is dominant in cities like Wuhan, Bergamo (Italy), New York and Madrid, could be the reason behind the rise in mortality in these two neighbouring states.

Hyderabad (69.23 per cent) and Chennai (62.5 per cent) are the two other big state capitals which account for more than three-fifth of the state’s mortality.

Delhi (State) has done remarkably well in containing the number of deaths despite the high number of cases. Its mortality rate of 1.74 per cent is the second-best amongst these 15 districts.

Eight of these 15 districts are big economic powerhouses too and six are state capitals – this would be a matter of grave concern as India looks to ease the lockdown restrictions in the coming weeks.