The Making of 'The Untold Vajpayee: Politician and Paradox'

A new biography of former prime minister Atal Bihari Vajpayee, one of modern India’s most intriguing politicians, looks at the hardline roots behind his liberal image.

NP Ullekh
A new biography of former prime minister Atal Bihari Vajpayee, one of modern India’s most intriguing politicians, looks at the hardline roots behind his liberal image. The author of ‘The Untold Vajpayee: Politician and Paradox’, which releases on December 25, Vajpayee’s 92nd birthday, Ullekh NP shares exclusive insights about his research.

Atal Bihari Vajpayee was born on the day Mahatma Gandhi was elected the Congress president for the first and the last time on December 25, 1924. But unlike most of his peers, the young Atal didn't think highly of the man who made a movement out of the Congress, which, before he took the helm was a conclave of the English-educated Indian elite to protect their business interests.

Atal was keen, very early on, to frequent RSS shakhas. He followed their hardline Hindutva politics opposing Gandhi’s secular ones, and he built his identity around his organization’s ideology. And yet, the image one most identifies with the former Prime Minister is that of a liberal, a leader who reached out again and again to Pakistan even after an unfairly fought and hard-won Kargil war, a leader who worked to solve the Kashmir crisis, who spoke of ‘insaniyat’ above all else. It is this paradox that makes Vajpayee such interesting fodder for a biography.

Few know that Vajpayee did stray once from the RSS camp, except he didn’t veer towards the rapidly growing nationalist movement led by Gandhi. Instead, he was briefly inspired by Leftist thoughts buffeting the world and became active in student politics in the early 1940s. He even joined the All India Students Federation (AISF), a feeder organisation of the Communist Party of India (CPI), which had an ‘internationalist’ outlook and had partly disapproved of nationalist assertions. The CPI opposed the Quit India movement of 1942 for what it alleged was a short-sighted move to weaken Britain at a time it was aligned with countries such as Soviet Russia in a war against fascist forces that included Hitler’s Germany and Mussolini’s Italy. The RSS was opposed to Gandhi and the Congress for other reasons, including visceral hatred of some of its leaders towards Gandhi. Either way, Vajpayee wasn’t associated with the nationalist movement nor was he a freedom fighter as the BJP claims on its official website. 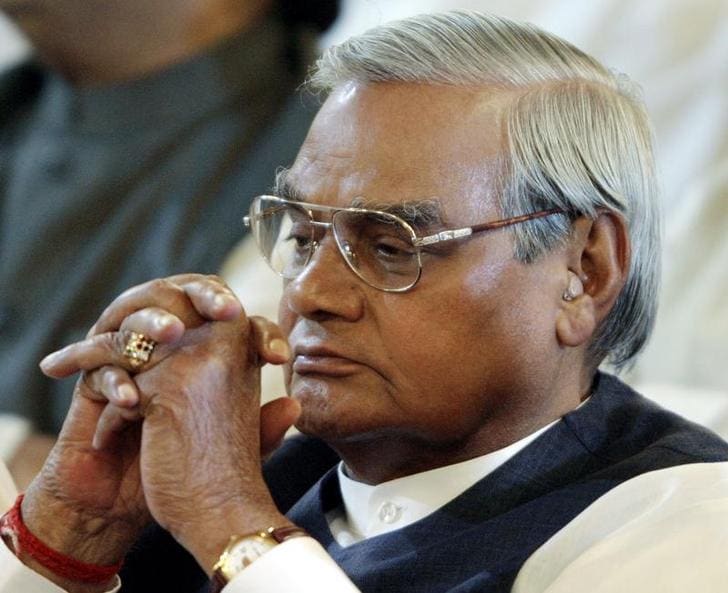 However, Vajpayee's involvement in politics starts as early as 1942 when he was jailed by mistake when he and his brother turned up in his ancestral home in Bateshwar while an anti-British protest was on. He was soon released after he confessed that he had nothing to do with the protest; in the process, he ended up naming a person whom he knew was part of the agitation.

The first time I heard the name Vajpayee was when my mother brought up his name as one of my late father’s favourite orators. This was in the early 1980s and Vajpayee was relatively obscure in India’s political scheme of things, especially for teenagers in Kerala who were familiar with Indira Gandhi; her lieutenant in the state, K Karunakaran; and of course, the indefatigable Marxist patriarch and former chief minister EMS Namboodiripad, whose words we were taught to treat like gold dust.

It took many more years to realise why politicians like my father, who had known Vajpayee as a fellow MP in the fourth Lok Sabha, worshipped the man. He was the ultimate benchmark of a parliamentarian as a highly successful rhetorician, someone whom younger MPs always aspired to be like, despite their huge political differences. Not all his speeches were rich in content. But who cared? He was like Maradona on the football field. It didn’t matter whether he used his feet or hand to score the goal. When Vajpayee spoke, people listened as though they were hypnotized more by his style than substance. I would rate Nath Bapu Pai as a better Parliamentarian-cum-orator, both in English and Hindi. But when Vajpayee spoke, he had the singular ability to mesmerise. 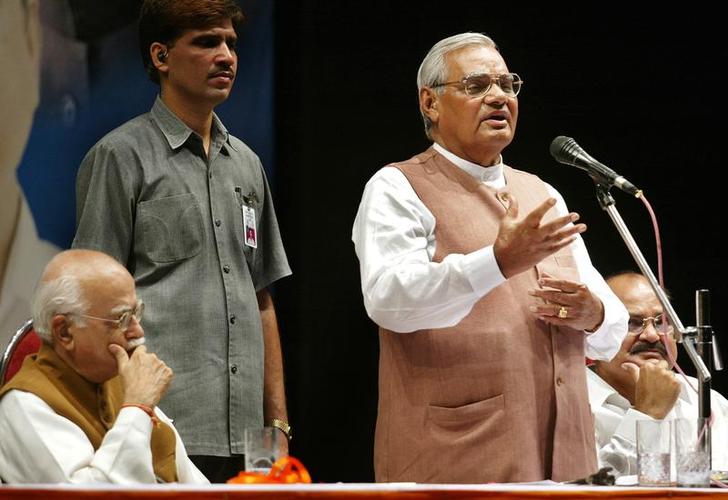 Without a doubt, Vajpayee, very early on, was known for his fiery speeches in Hindi and as an artist with the spoken word. Vajpayee had told his friend N.M. ‘Appa’ Ghatate that he learned these basics about public speaking from his own father, who Vajpayee said was equally good in English and Hindi. The senior Vajpayee had joined the law course at DAV College, Kanpur, along with his son, much to the amusement of other students on the campus. Appa Ghatate was one of the key people who generously gave me time, resources and insights into Vajpayee’s intriguing personality and his powerful personal brand, besides interesting snippets such as these that make up substantial parts of my book.

Vajpayee was deeply influenced by Parliament and its charm. He looked up to the elite that dominated the House, especially in the first two decades of his time in Parliament. That lure would endure till the end. In the beginning, for a small-town boy, the biggest idol was Nehru himself. Suave, upper class and stylish, Nehru was decidedly his unstated idol. His admiration for the likes of Jaswant Singh, Arun Shourie and others from respected families and also for the beautiful people of Lutyens Delhi stayed with him throughout. Vajpayee with other BJP leaders in Parliament complex on December 17, 1993. (Reuters)

The undying appeal of Parliamentary politics and the politics of elitism it fosters changed Vajpayee forever. He would not remain the frenzied orator that author and academic Robin Jeffrey saw in the 1960s though he crawled back to the ultra-nationalist fold occasionally. It is that transition from being a hardliner to a sane-sounding Parliamentarian that set him apart from his colleagues in the BJP and made him a beloved leader with a charisma that transcended party lines. Perhaps it helped that he was a Brahmin as Charan Singh had stated in his interviews, which are brilliantly documented by Paul R. Brass in his books on the late leader who, ironically, was a victim of the class and caste bias of the media of the time. Interestingly, such prejudices clearly came to Vajpayee's advantage. It is no surprise then that most of his confidants happen to be Brahmins.

It was Vajpayee’s masterful oratory that attracted the attention of SP Mookerjee who immediately hired him as his assistant, translator, stenographer, all rolled into one. In this book, I have dwelled at length on why I think he was a natural successor to his mentors like Mookerjee – and as someone who, unlike his mentors, was ready to mould the Bhartiya Jana Sangh to connect it with those who disapproved of its rigid, purist ways. Vajpayee also braved odds and fought off rivals who wanted to align with reform-oriented outfits, a proposition that would have been incongruent with the India of the time. Later, however, he reshaped the contours of his party, the successor to the Bharatiya Jana Sangh, the Bharatiya Janata Party, formed in 1980, to suit new challenges and strike new opportunities.

But often he, a great schemer, played his cards close to his chest. It also meant that he was ambivalent and never opposed the move to turn the Ram temple agitation into a massive movement with an eye to pull in Hindu votes beyond caste and class. To the outside world, he was opposed to the Ayodhya movement spearheaded by Advani, but that didn’t mean he took a firm stand within the party. He often poked fun at “Advaniji and his vanarsena” that matched from Somnath Temple demanding the construction of a Ram temple in Ayodhya, in a place where the Babri Masjid then stood. But he spoke not a word against Advani at party forums. In fact, a day before the demolition of the Babri Masjid, he was in Ayodhya, suggesting that something drastic had to be done and some structures razed to bring back honour to the Hindus. He was in a meeting with ultra militant groups of the Sangh Parivar. However, the general impression was that he was deeply hurt by the events that followed. Giving him the benefit of the doubt is former BJP general secretary KN Govindacharya who says, “Vajpayeeji often spoke eloquently about things he absolutely had no conviction about.” A kite maker displays two-inch-long kites with photographs of Atal Bihari Vajpayee, LK Advani and the BJP symbol in Amritsar May 1, 2004. (Reuters)

But then, Vajpayee had made several other incendiary speeches as a young man, and even in Parliament. In 1970, Indira Gandhi herself had to intervene and take on a young Vajpayee when he started dwelling at length on the Congress’ ‘promotion’ of Muslim fundamentalism. A review of that speech shows us a different Vajpayee, rabid, no-holds-barred to the core. The most notorious of his diatribes was a highly provocative speech against migrants in Assam preceding the Nellie massacre of 1983. Even a section of his party chose to distance itself from that speech and the opinions he had aired.

One could argue that such speeches were part of his posturing to stay ahead of the race and to outmanoeuvre his hardcore rivals within the party. After all, within the RSS and the BJP, Vajpayee had come under sharp attack (mostly covert) for being ‘mild’ as regards Hindutva assertions. And yet, despite having one foot in the hardline camp, Vajpayee maintained the image of a liberal in the public eye. This is what makes him a complex politician to analyze. Then PM Atal Bihari Vajpayee places a garland on a statue of BR Ambedkar in Bangalore on April 14, 2004. (Reuters)

I also explore how Vajpayee, thanks to his high IQ cunning, warded off not only irritants of the RSS while he was PM, but also one-upped comrades in arms whenever he felt they were overshadowing him as PM. Of course, he was very much in control of the cabinet and was abreast of each and every development within the government. Yet, when Advani, his only rival in the party while he was PM, got some of his men to resolve the Ayodhya issue with the help of the Ayatollahs of Iran – an ambitious venture which is revealed for the first time in my book – some of Vajpayee’s acolytes, especially his NSA cum principal secretary Brajesh Mishra ensured that nothing came of such efforts. As luck would have it, Vajpayee had the last laugh.

For this book, I have done extensive research from Vajpayee’s ascent to prominence in the Jana Sangh in the 1970s; his ‘compromising position’ during Emergency; his ups and downs in the 1980s; his remarkable comeback in the 1990s; his pivotal role in transforming many of the key industrial segments in the country; his position as the father of the second nuclear age; and finally his decline within the party following the Gujarat riots of 2002. The other two members of the so-called trinity of early BJP leaders – LK Advani and Murli Manohar Joshi – refused to speak to me despite repeated requests. Advani categorically expressed his inability to cooperate with this project.