Manimaran is an exponent of the Parai music form which is practised predominantly by Dalits in Tamil Nadu.

There is a kind of loneliness within the larger community of musicians, artists and instrument makers, which only those from the depressed castes understand and feel, say the performers.

"The artist is quite alone right now. All of us are feeling quite lonely inside our homes," Manimaran says, giving the example of a nadaswaram (a wind instrument) player from nearby Sivaganga district who took his own life some 20 days back.

"There are not just financial difficulties, there is a definite psychological trauma also. Everyone has their own grief to come to terms with. For instance, my son was going to be the first from our family to attend college. For which I had planned to pay through a two-month tour of the United States that my wife and I were scheduled to go on. But everything is cancelled now. I have no money to pay for his education."

Manimaran is an exponent of the Parai music form which is practised predominantly by Dalits in Tamil Nadu. It's an art form which TM Krishna, noted writer and musician, mentioned in a recent article The Uselessness of Art.

In it he quotes Member of Parliament Thol Thirumavalavan saying, "When mridangam makers, whose creations are played by Brahmins on Brahminical stages, have been invisibilised, what will be the socio-economic state of the Parai artists (an instrument made and played by Dalits)."

Manimaran agrees that there is a kind of loneliness within the larger community of musicians, artists and instrument makers, which only those from the depressed castes understand and feel.

"Dalit musicians can't save any money. They save only poverty. If I were born in upper caste, this crisis would have not affected me perhaps as much. The upper caste musicians enjoy patronage, recognition, awards. Only last year, after a huge protest, was for the first time in the history of Tamil Nadu, a Parai musician given the state Kalai Mamani award."

The past three years have been quite tough on the musicians. This very time, from May to July, is when Parai artists like Manimaran, who have devoted his life to Parai, earn whatever little keeps their families afloat for the rest of the year. "First we were hit by the Gaja cyclone, the following year there were elections, so a lot of restrictions were placed on our performances and this year it's the Covid-19 and lockdown," Manimaran says.

But he, along with some other fellow musicians, is trying to keep the community engaged constantly, to prevent ennui and grief from taking over them. These days what's keeping Manimaran and his fellow musicians busy is the preparation for the 'International Parai music competition', which is going to be judged by Parai experts from many countries, including, India, America, Singapore, London and Australia.

These are the very places that Bhagwan Dass, an internationally renowned and awarded folk singer, says he performed in, in his heyday. "Jab kalakaar khatam ho jaayega, kala bhi khatam ho jayegi. Kuch 500-700 to pehle hi mar gaye, jo bache hain wo bhukh se mar rahe hain (When artists are no more, art will also perish. Some 500-700 artists have already died; those remaining are dying of hunger)."

"I spread our culture, our nation's name in countless cities, in some 25 countries. Indira Gandhi, Rajiv Gandhi, they used to watch me perform once. During India's 50th Independence Day celebrations I performed the national anthem in our embassy at Abu Dhabi. Today we are forgotten. We don't have a morsel to eat," Das says from his one room tenement at Kathputli Colony transit camp. All performances that Dass and his family had lined up this summer have been cancelled. They don't know where the next meal will come from.

It's come to a hand-to-mouth situation for duitara player Banshailang. "It's a hard time for those whose entire life depends on it. I earn by performing, teaching music. Since everything has come to a standstill, there's no money at home. Thankfully, my mother is there to support us," he says. 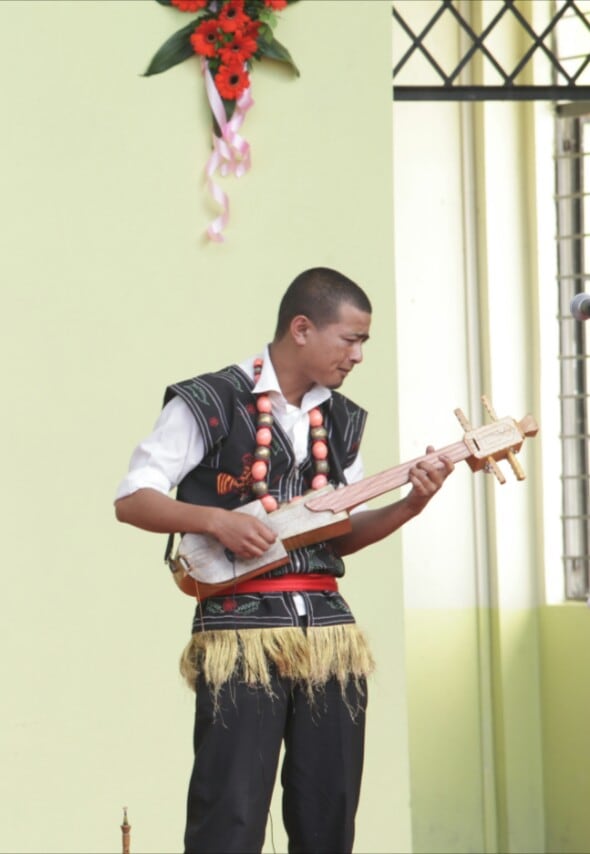 Preparations for a folk art and dance festival that Banshailang helps conduct in Shillong should have started by now, he says. "It's June already and we don't know if the festival is happening or not. These festivals are what help us keep tradition alive, help us spark interest for our folk tradition among the next generation. Not even 30 duitara players remain across Meghalaya today. The lockdown and the lack of support could force a lot of people to look elsewhere for survival," he added.

Mebanlamphang Lyngdoh, who is also a duitara musician and is currently coordinating a relief drive to help instrument makers, says that a lot of them have turned to farming since they are not being able to sell any musical instrument these days.

In the same article The Uselessness of Art, Krishna, who has been trying to set up a fund for marginalised artists, goes on to say, “Art in all its expressions is not considered essential, and artists are viewed as mere entertainers. But art is much more than eye candy. It helps us make sense of our existence, reflect, imagine, hope, change, discover and reinvent ourselves. The arts are emotional murals…Until we realise that art in all its dimensions and manifestations is indispensable to keeping our society emotionally intelligent and true, we will remain cultural tyrants who control, manipulate, use, and discard artists.”