Their Homes and Hopes Gutted, Families are Moving Out of Riot-Hit Delhi Colonies

Some were sheltered by their Hindu neighbours, while some others weren’t directly affected by the rioters. But Muslims in Khajuri Khas, Maujpur Babarpur and Bagirathi Vihar are not leaving their safety to chance.

A man moving out of Khajuri Khas with his remaining belongings. (Shivansh Sharma/News18.com)

New Delhi: Sixty-five-year-old Mohammed Tahir was standing at the entrance of gali number 4 in Khajuri Khas along with his two daughters-in-law. All three of them stood there for a long time, weeping inconsolably and hesitating to step into the gali which once housed their home.

On Tuesday morning, a mob of over 1,000 people stormed into this gali, vandalised and looted homes, and then set them on fire with the occupants still inside. One of those families was Tahir’s. A religious structure in his gali was also burnt down.

Like others, Tahir and his family had been able to climb to the roof of their house in time and jump from terrace to terrace to save themselves while rioters were threatening to climb up the stairs.

It was on Wednesday afternoon that Tahir and his daughters-in-law had returned to collect the remains of their household. But they could not bear to see the sight of all that they had built being reduced to ashes. All that they could do was sit at the entrance of gali number 4 and weep.

“For the last three days, rioters have been destroying properties and killing people. We somehow were able to save our lives. My wife, who is paralysed from the waist down, could hardly move in time. My two sons are injured. We haven’t eaten anything in 24 hours. My newborn grandchildren are surviving on water,” Tahir said, breaking down repeatedly. Although Hindu households were also attacked, it is the Muslim community that has moved out from the locality completely. Tahir’s family was one among many other Muslims in Khajuri Khas, including some who were not directly affected by violence, who have left their homes so safer spaces.

News18 came across many Muslim families in Khajuri Khas, Maujpur Babarpur and Bagirathi Vihar who had either left their homes or were moving out with all their belongings.

Mohammed Efaz (20) was carrying a sack of vegetables, moving out of Khajuri Khas with his family. “We have never seen such a situation before and there is an atmosphere of terror all around. The mob entered forcefully with slogans like ‘Jai Shri Ram’ in the area and burnt our house. The rioters were also carrying a gun and fired at us,” he said.

Sitara, a resident of Khajuri Khas, has a young daughter to protect. “I have a daughter who is two-and-a-half months old. She was also attacked by the mob. The mob threw stones at me and my daughter. Had something happened to her, I would have died. I had a lot of dreams for her, but now I am only thinking about how I’ll feed her,” she said. 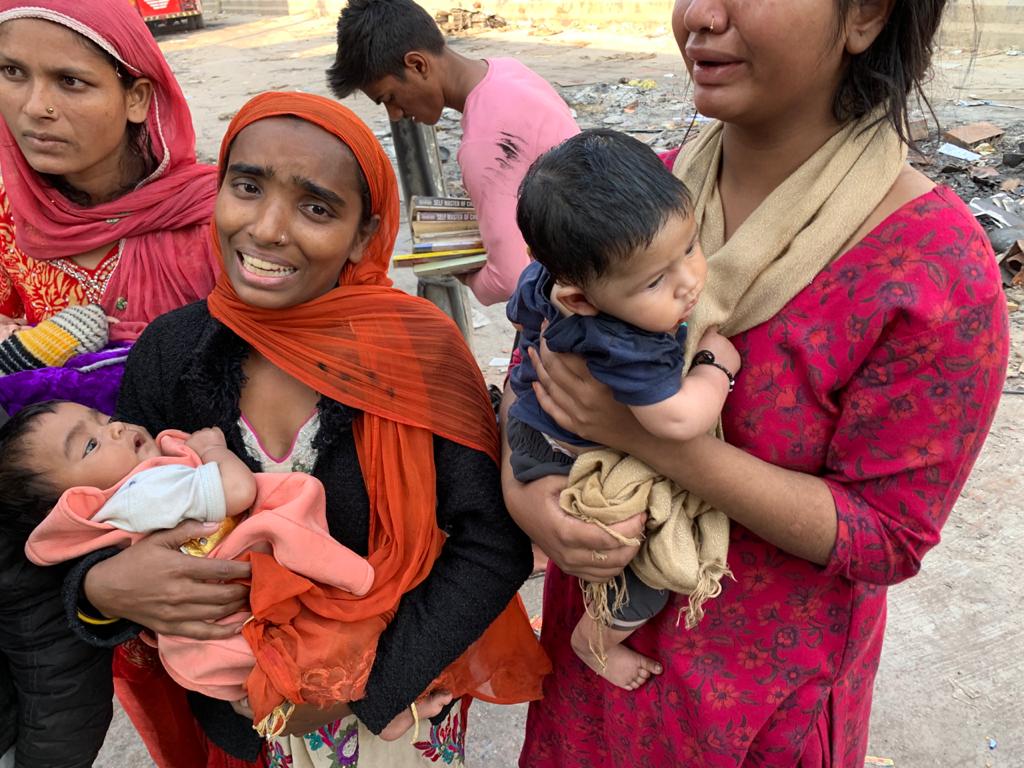 Nazim, 21, who was living in a rented accommodation in Khajuri Khas, has now planned to move elsewhere. “Nothing is left here. Even our neighbours are afraid they will be harmed if we live with them. My brother-in -law, Chand Aalam, has sustained a bullet injury on his neck.”

Hindu residents of Khajuri Khas say they tried to help Muslim neighbours but the mob was too strong. “We even helped hose down houses that were set on fire by the mob,” a resident said. Mastan, a 33-year-old resident of Vijay Park in Maujpur Babarpur, was going back with his family to his native place Bijnor because of riots in the area. “We are all scared of what is happening in the area. The atmosphere here is full of terror. My shop has been closed since three days. Conditions are getting worse day by day and my family members living in Bijnor are also worried about me. I have been attacked by the mob when I was out to bring some stuff for home. The mob threw stones at me,” he said.

Mohammed Arif, a daily wage labourer, was going back to his home in Sambhal. “Every day, for the past three days, mobs have been attacking us. Because of the riots, hotels are closed and it’s getting difficult to arrange food.” Arif, a tailor, had just joined work at a shop in Vijay Park area two days ago, but because of the riots, the shop was closed. He hasn’t earned a single penny.

Amit Bansal, a resident of Bhaghirathi Vihar, said, “Muslims in the area already left two days ago. Their houses were vandalised on Wednesday morning by the mob. There were five Muslim families whose houses were set on fire by the mob”.

Ajay, another resident, said, “The rioters came around 3 in the night and vandalised Muslim-owned houses. Although the rioters did not seem to be from around here, they clearly knew which house belonged to Muslims and which did not. Houses of that community were specifically targeted. Now, there is no Muslim family in this entire neighbourhood. All of them have moved out, till as far as Mustafabad.”