A total of 121 huts were gutted in a fire that broke out in Noida’s Sarfabad village at around 2.30 am on Friday.

Noida: Air filled with smell of burnt rice and rubber, Abul Malik squats amid the remains of his hut and rummages through his blackened belongings. He finds something under the carcass of his cooler, pulls out a sooty tin can and takes a look inside. “Charred coins,” he says and lifts the can up to show its contents. “Notes have become ash.”

Everything that Malik possessed, including Rs 25,600 saved over the course of three months for his sister’s wedding, was lost in the fire that brought down his basti in the wee hours of Friday. The sun wasn’t out but the slum in Sarfabad village in Sector 73, Noida, burned bright as day, the locals said. Nothing was spared. Even the coins in Malik’s tin can are unusable. “I can’t even buy a cup of tea with these,” he rues, throwing the can down.

The fire reduced all the 121 dwellings in the slum to ash; another 116 tin-roofed and tarpaulin-walled houses in the adjacent slum are also soil and smoke. On the fateful night, made worse by cold winds, the fire spread across both sides of the high wall that separated the two slums. By the time fire engines arrived and managed to wrestle down the flames, little was left to salvage.

“It was really late in the night, around 2.30 am. Everyone was sleeping, so nobody knows how the fire started,” said Anish-ur-Dafadar, whose hut was also burnt to a crisp. He works in a housekeeping crew at one of the many high-rise societies that surround the slum.

Anish woke up to cries of ‘fire, fire’, came out of his hut and saw flames that were already reaching the sky. “There was complete commotion. We had little time to react,” he recalled. He took his wife and two children and ran out; no one had time to pick up valuables or belongings. School textbooks, identification, ATM cards, jewellery and hard earned money — all looked the same by morning. 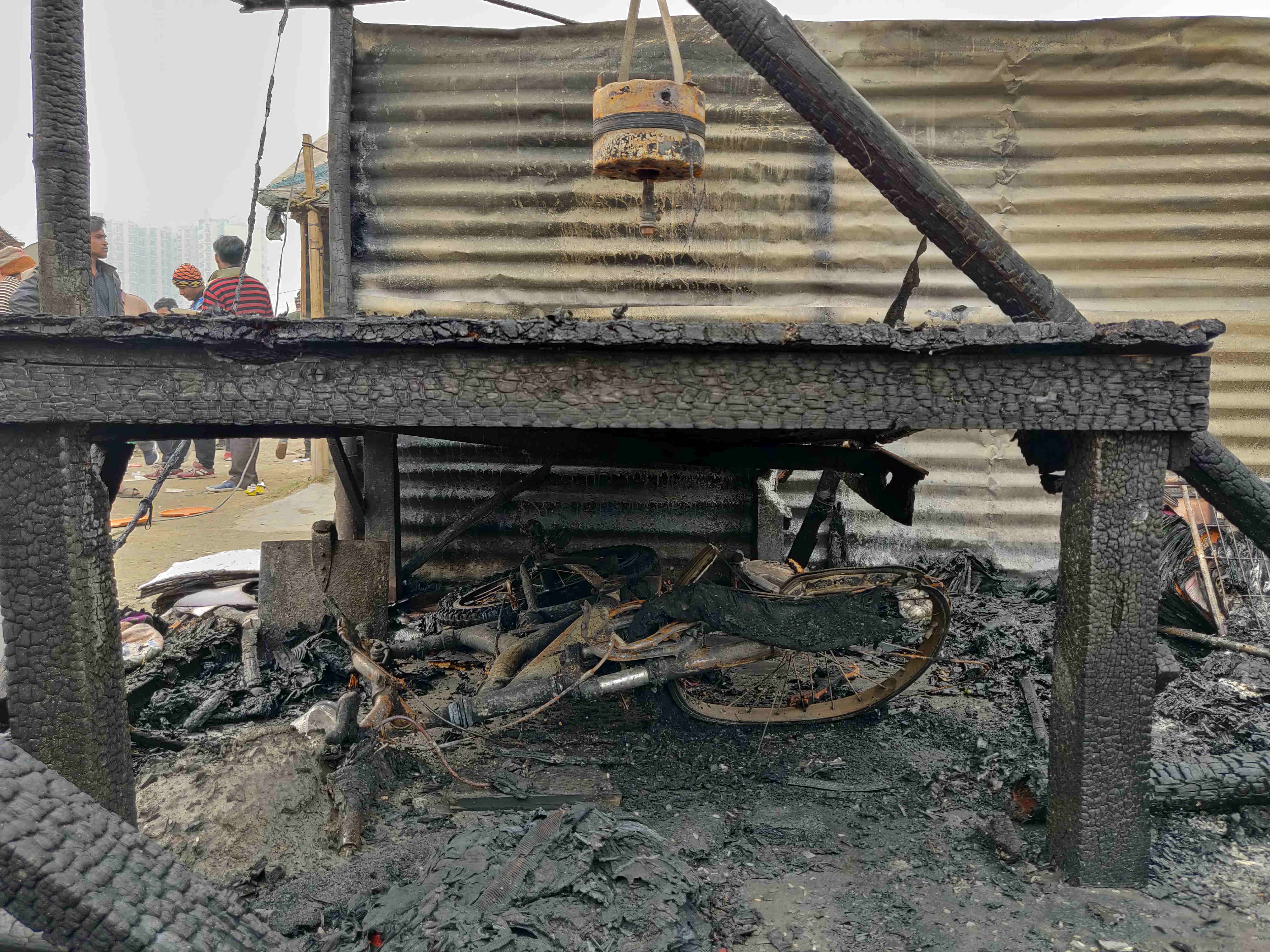 A charred bicycle under the bed of a house that did not survive the fire.

The fire took 237 houses from two slums, one of which was completely wiped out. Each house had three to five family members, which left around a 1,000 people homeless. A large chunk of the residents are migrant Muslim labourers from West Bengal who have lived at the slum for eight years. Most men from the affected slums are scrap dealers; women are employed as maids and housekeepers in nearby high-rises.

All of them had cash at their houses — their pay they received on the first of the month. Some even had savings accrued over years bundled away in boxes. Siraj-ul-Malita had Rs 41,000 in cash, saved up for his daughter’s wedding. Bani Bibi had Rs 70,000; she was planning to buy some land back in her village. All gone.

But despite the commotion, cramped lanes, gas cylinder explosions and only a single exit to each slum, there were no casualties. Only two residents suffered minor burns.

Munir-ul-Dafadar’s father and six-year-old son Sanil were stuck inside their tenement and the doorway was blocked. When he went around the house to get them out, he suffered burns on his back and right shoulder. Munir was later treated at a nearby hospital and released. Sanil had minor burns on his back as well.

Some residents speculated that an electrical malfunction caused the fire; housing materials were highly flammable. But Aroz Khan, the contractor who lived in the same slum, suspected foul play. Residents said the fire started from Norzul’s hut, located next to the wall near the edge of the slum. “It spread from there on either side of the wall,” said Khan, who runs a scrap business.

Slum dwellers worked for Khan and in return he gave them living space and paid the rent to the land owner. “I think someone started the fire. Norzul is not even here. He had locked up his hut and gone home to his village. How did the fire start at his place then?” Khan asked. He also pointed out that fire had started from the place where it could affect both slums on either side of the wall suspicious.

Some claimed that the fire engines were late to the spot and had the response been quick, they said, a lot could have been saved. “I called up the fire services at 2.30 am,” said Shivang, showing the call history on his mobile phone.

Shivang, a resident of the building that overlooks the affected slums, heard people shouting late in the night and saw the slum engulfed in fire from his balcony. “I called again, first at 3 am and then at 3:30 am. It was almost four in the morning by the time the fire brigade arrived. People were already trying to douse the fire with buckets of water,” he said.

Police, however, have not registered a case and are yet to ascertain the cause of the breakout. One officer at spot said the fire could have started due to an electrical malfunction. “Some homes had heaters on in the winter. A spark could have set off the fire,” he said.

Shwetabh Pandey, the Circle Officer of the region, said police will investigate the incident further. “There were no reported deaths and only one suffered minor burns. No persons have been reported missing either,” he said.

Saifuddin Dafadar, another slum resident who lost his home, was making a list of all residents since early Friday morning. He tallied all families living in 121 huts in his slum, accounted for each family member and handed over the document to the authorities. “It will help in the relief work,” he said.

Residents tried to salvage what they could, picking up burnt remains of a life. Utensils, clothes, tin sheets, books that could still be read, food grains stored inside metal pots that escaped the fire’s wrath — anything that wasn’t black dust. The rest, that didn’t make it through the fire, was strewn across the smoldering slum: dozens of charred rickshaws, a burnt bicycle stashed under the bed, a half-melted hairbrush and broken bangles covered in soot. A slum resident looks through burnt remains for valuables.

Local NGOs that have worked in the slum community for a few years served food and distributed blankets to affected families. “We are doing a collection drive and getting clothes, money … anything that would help,” one NGO worker said. “The immediate need is shelter. We are working on that.” A few residents said they could go to a relative’s house for a while, but most were planning to the stay the night in the slum.

The Sub-Divisional Magistrate Anjini Kumar Singh turned up at the spot and promised compensation to the victims. “We are arranging for blankets. Families will be provided compensation,” he said. The amount of monetary compensation, however, was not specified. Singh said authorities could no longer make restitutions in cash and the amount would be transferred to bank accounts of the affected persons.

Most residents said they lost their Aadhaar, ATM cards and bank details in the fire and not everyone had a bank account. “We will have to help ourselves,” said Shamsul Sheikh, standing next to a heap of twisted metal and plastic that was his home. Light smoke still billowed from his belongings. “Where can we go? We have to rebuild with what we have.”