'Tis the Season of Loan Waivers: Decoding Cost to the State as Rahul Gandhi Plays Santa for Farmers

These cascading loan write-offs, while being populist measures meant to win favour and sentiment among the large voter base of farmers, are also a stress on state economy.

The loan waiver would be applicable to short-term loans taken from cooperative banks and loans of up to Rs 2 lakh taken by farmers from nationalised, commercial or other banks till November 30. Chief Minister Ashok Gehlot tweeted that the loan waiver would cost the exchequer Rs 18,000 crore. Gandhi tweeted “It's done”.

It's done! Rajasthan, Madhya Pradesh & Chhattisgarh have waived farm loans.We asked for 10 days. We did it in 2.

On Monday, Madhya Pradesh Chief Minister Kamal Nath had cleared the proposal of waiving farm loans up to Rs 2 lakh, his first act as CM. The waiver is estimated to burden the state by Rs 35,000 to Rs 38,000 crore, benefiting around 34 lakh farmers in the state.

The same day, Chhattisgarh CM Bupesh Baghel, too, announced a waiver of short-term agriculture loans to the tune of over Rs 6,100 crore for more than 16.65 lakh farmers. These loans were drawn from cooperative banks and Chhattisgarh Gramin Banks.

Even the BJP decided to jump on the bandwagon, with the party-led Assam government approving Rs 600 crore farm loan waiver, which it said would benefit around 8 lakh farmers in the state. The waiver is structured as a 25 percent write-off on loans of each farmer, up to a maximum of Rs 25,000.

These cascading loan write-offs, while being populist measures meant to win favour and sentiment among the large voter base of farmers, are also a stress on state economy. In the three states that recently voted in Congress governments, the total cost of waivers is estimated to be between Rs 59,100 crore to Rs 62,100 crore.

This is known as the Debt to GSDP ratio. This ratio, expressed as a percentage, is a proportion of the state’s public debt to its gross domestic product (GDP). Or simply, the ratio of what a state owes to what it produces.

With the promised loan waivers, Chhattisgarh is about to incur an additional burden of Rs 6,100 crore, which will put a relatively small stress, an increase of 1.87 percentage points, over its estimated liabilities in the year.

But the loan waiver amount is more than twice the estimated amount Chhattisgarh had planned to spend on agriculture — Rs 2,366 crore — in the 2018-19 state budget. In the planned budget, the state, under the BJP government of Raman Singh, had allocated Rs 184 crore to provide interest-free short term agricultural loans. Madhya Pradesh is a different story from Chhattisgarh. A bigger state has a bigger budget, but also bigger liabilities. The state budget target for 2018-19 is an estimated Rs 1,86,685 crore. The Gross State Domestic Product (GSDP) of Madhya Pradesh for 2018-19 is estimated to be Rs 8,26,106 crore, with outstanding liabilities forming 26.3 per cent of the GSDP, amounting to Rs 2,17,265 core.

After Chief Minister Kamal Nath’s loan waiver announcement, the state is going to incur an additional Rs 35,000 crore, at the least. This will cause an increase of 4.23 percent points in the debt to GSDP ratio of the state.

The loan waiver amount is also twice the amount allocated to education, four times the public works budget and equivalent to the entire rural development finances of the state in 2018-19.

The planned total agriculture expenditure for 2018-19 was already a whopping 87.4% more than what the state spent on the sector in 2017-18 (Rs 4,942 crore). Loan waivers are now set to pile additional stress on finances. 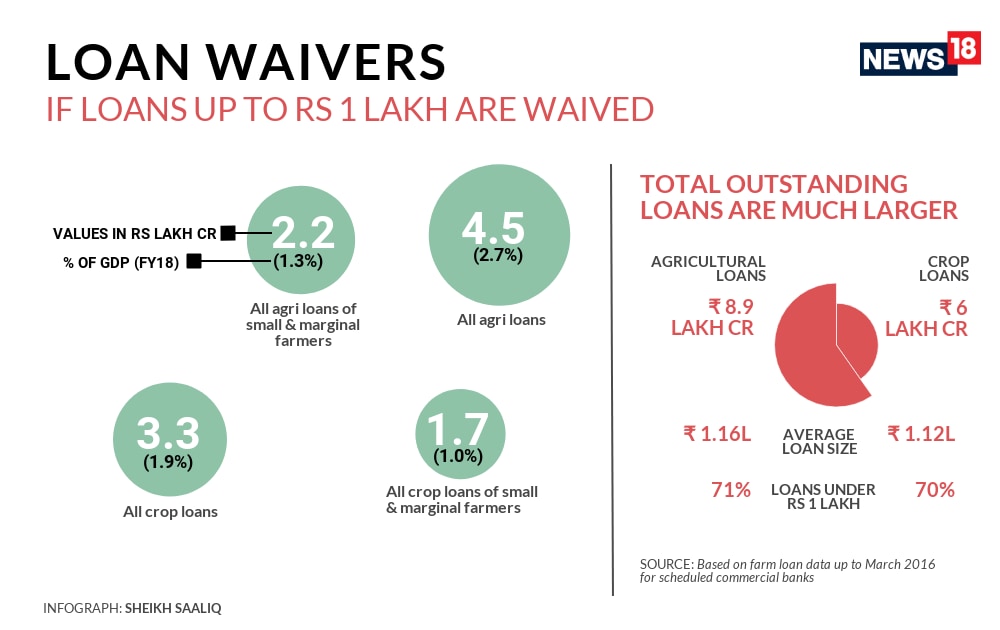 The Vasundhara Raje-led BJP government in Rajasthan had already promised loan waivers of up to Rs 50,000 for farmers ahead of elections, which was costing the state Rs 8,000 crore.

Now, Ashok Gehlot government’s promise of loan waivers up to Rs 2 lakh is going to cost the state Rs 18,000 crore, where the total expenditure for the year is budgeted at Rs 2,12,000 crore. This will mean an increase of over 2 percentage points in the debt to GSDP ratio of the state.