Severe water scarcity is forcing tribals in Damoh's Hatta block to defy the lockdown even as they set out on a dangerous journey each day in search of water.

On a warm morning, Rakesh Singh walks up a jagged valley bristled with stones, carrying up a kuppa (a spherical vessel) full of water on his head. It was only 8 am, but the sun is already blazing. As sweat trickles down his forehead, the young farmer — a Gond tribal — takes off his blue checked shirt and continues ascending the valley, pacing his speed with each step as the rocky ground below his bare feet starts to heat up.

He is not the only one on this arid route. Unmasked and oblivious to the threats of COVID-19, several villagers from Ghoghra — a small hamlet with a population of around 500 in the Hata block of Madhya Pradesh’s Damoh district — have been making this difficult trip just to fetch water. “There is currently no water supply in the village. The nearest source of water is almost 1.5 km from our house,” states Ramesh. The source is a 10-feet deep well lying below the Amkhua valley, situated in the buffer zone of the Panna National Park. In search of water, many families, particularly women and young children of Ghoghra, leave their village in the morning, as early as 6 am. With temperatures soaring to above 40 degrees in the summer, early mornings are the only suitable time for the villagers to make the trip down a craggy stairway in the valley dotted with bare trees. The water from the well is used not just for drinking but also for cooking, bathing and washing clothes. The climb back is more challenging. Many women carry as many as three containers of water and washed clothes on their heads. This arrangement for water takes about 2-4 hours every day and puts the villagers at risk of accidents. 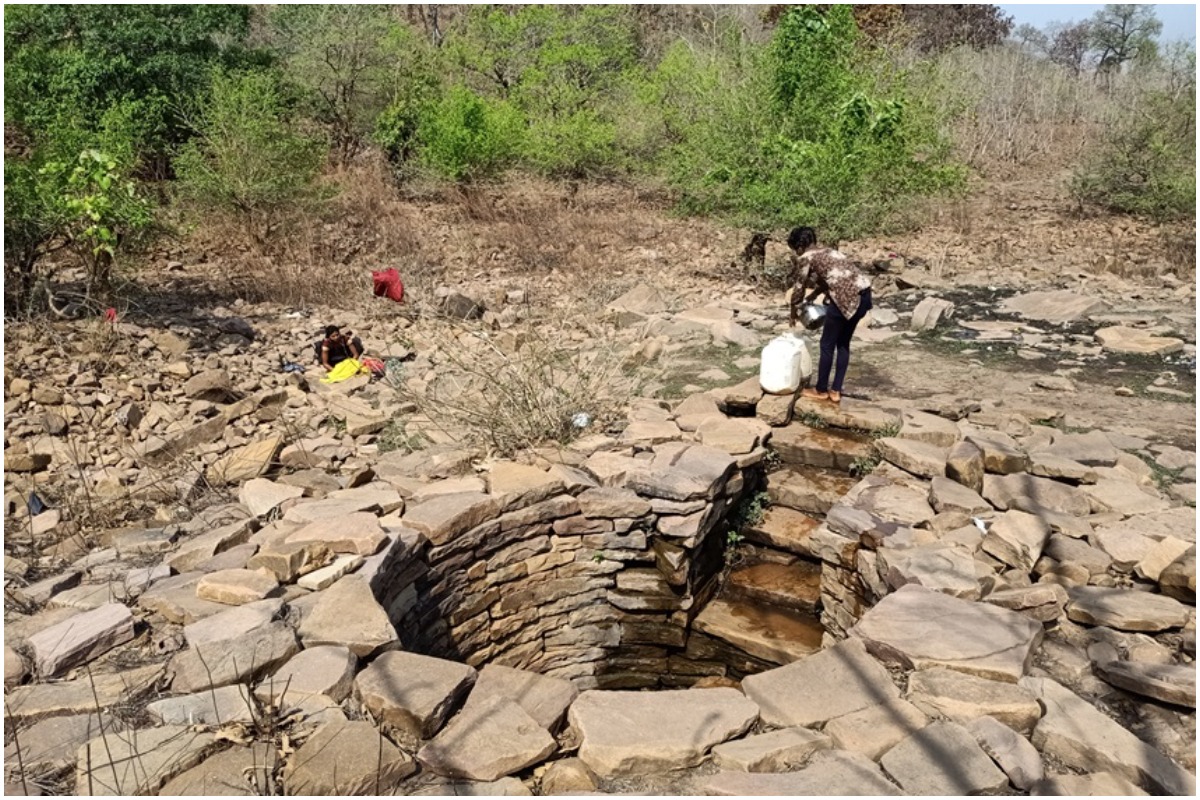 Women and children walk 3 kms up and down a steep, rocky slope to fetch water from this well at the edge of the reserve. (Pic: Naresh Kumar Mishra)

“This is dangerous terrain. Several people fall and sprain their ankles,” states Vikas Yadav, a 28-year-old farmer from Ghoghra. The village is home to the Gond tribal community and is located about 70 km from the district headquarters of Damoh, which is much more equipped with basic facilities. It also lies on the fringes of a dense forest. Animal-man conflict is thus, not uncommon.

“The area under the valley belongs to the forest department. There are many predatory animals including leopards, wild dogs and bears,” states Surendra Singh, as he prepares to fill water in his kuppa. A farmer in his mid-twenties, Singh echoes the dangers of the valley and adds that people must walk up very carefully to avoid accidents and animals.

Villagers of Ghoghra have been making this journey for water for several years. Many hand pumps haven’t been working due to low groundwater levels in the region. Three years ago, a solar-powered borewell was installed in the village. However, due to machine failure in early 2020, it has also been inoperative. A solar-powered borewell that was installed in the village three years ago has been inoperative since last year due to machine failure. (Pic: Naresh Kumar Mishra)

“Every day, we have to fetch water on foot. We are not tired of complaining, but there is no one hearing,” says Kavita Devi as she ascends the valley carrying a big pot of water on her head.

Surendra Singh validates this. He states, “We demanded water facility in our village. But no hearing has been held. The motor in the bore machine is also not working.”

Ghoghra village Sarpanch Darelal Ahirwar refused to comment on the record about these claims. But there is no denying that the families of Ghoghra are suffering due to the negligence of the Panchayat.

Several officers are not attending office due to COVID-19 restrictions. So on-site inspections for these issues are not happening properly, says Virtesh Jain, CEO of the Janpad Panchayat. His office has been conducting several surveys to determine other possibilities of water facility and locations for more borewells.

Until those plans materialise, the villagers of Ghoghra continue risking their lives for a basic need.

(The author is a Damoh-based freelance journalist and a member of 101Reporters.com, a pan-India network of grassroots reporters.)