'Umar Borrowed Money to Buy Cows to Get Milk For Kids', Says Alwar Family as they Refuse Post-Mortem

It’s been three nights since Umar’s father Sahabuddin Muhammad has slept. And this is not because the 80-year-old sits blankly among all his wailing children throughout the day, but because he still cannot fathom why was his son targeted.

Alwar/Ghatmeeka (Fahari Tehsil)/Jaipur: An eerie silence envelops the Ghatmeeka village, about 70 kilometers from Alwar, when one asks for Umar Mohammad’s home. You don’t have to wait for directions or signboards, or look for a crowd to trace his 100 square feet home, as the mourning cries of his widow and eight children travel can be heard from several miles.

Umar (35), a dairy farmer, was shot dead on Friday and later thrown on the railway tracks only to be found in a decapitated state at an Alwar mortuary. The body has now been shifted to the Sawai Man Singh Hospital in Jaipur.

It’s been three nights since Umar’s father Sahabuddin Mohammad has slept. And this is not because the 80-year-old sits blankly among all his wailing children throughout the day, but because he still cannot fathom why was his son targeted. “Umar never had any cows. His children needed milk for the winters and we had also told him that milk is necessary. He borrowed close to Rs 15,000 from the villagers and took loans from the market to buy cows. We never eat cow meat as it’s the only animal which gives our children the strength they need,” said the old man who can hardly sit straight on a bamboo cot."

Family Says No to Post-Mortem

Alwar Police discovered Umar’s body on the railway tracks near Ramgarh station and an abandoned vehicle with cows in the Govindgarh area the same day. While Superintendent of Police, Rahul Prakash ruled out the involvement of Gau Rakshaks and hinted it to be a case of robbery, the family strongly believes that this was nothing but a case of cow vigilantism.

Late on Monday evening, Iliyas, Umar’s uncle and a few members from the Jamaat Ulema-e-Hind and members of local Mewati councils met at Muslim Musafir Khana to decide whether they should allow post-mortem on Umar. “We have demanded Rs 50 lakh compensation and a government job for any one of the family members. Till the time these demands are met, we won’t allow a post mortem. Umar hailed from a farmer’s family and we depend on animal milk to feed our children. If they do not allow us to have cows too, then where should we go?” asks Iliyas.

“Look at Umar’s body once, he has no head or face left, he has been killed like an animal and the culprits must be hanged unto death.”

As the family of Umar met the Jaipur Director General of Police, Ajit Singh, one of the moot points of discussion was how inefficient the current investigation has been and why it must be transferred to competent police personnel, so as to not “let it meet the fate of Pehlu or Akhlaq.”

Chowdhary Khurshid Ahmed, President of All India Meo Samajik Sangathan, who was present at the meeting with the DGP to put forward the request of Umar’s family, told News18 that the “developments were positive”.

“The primary demand was that the DGP transfers the case to a fair and efficient officer. The DGP listened to our demands carefully and promised that the officer charged with police inaction will be removed and that Alwar ASP Anil Beniwal, who is still under training and is a man of proven competence, will lead the investigations,” said Khurshid.

Anil Beniwal reiterated Rahul Prakash’s claims about the scene of the crime and how tyres were missing from the mini truck. However, Deputy SP of Police (Ramgarh) questioned the criminal background of Tahir, who was injured in the attack.

“He has previous cases of cattle smuggling against him. If he was innocent, he should have reported the matter to the police and not be in Haryana for medical purposes,” said Beniwal.

How Things Unfolded in Umar’s Village

Ghatmeeka has about 400 huts that mostly belong to Mewati Muslims who engage in dairy farming for a living. The village boasts of over 1000 milching cows, while the children here have never heard of “milk packets available at shops”. 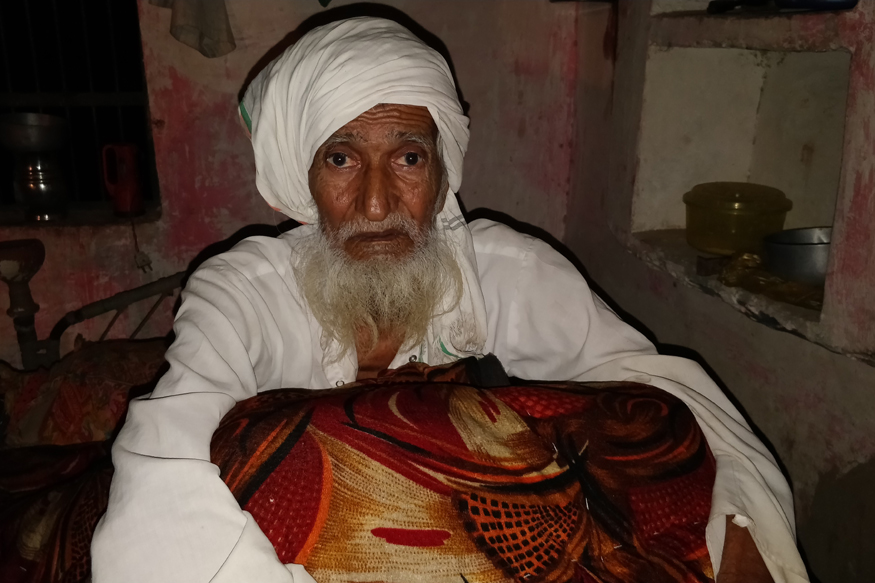 Just three houses after Umar’s is his younger brother’s house. Javed Khan, their 22-year-old son, who was there in the village when the news of Umar’s disappearance came along, told News18 that “Tahir and Javed did return to the village to inform us about the incident.”

“Javed and Tahir somehow saved their lives on November 10 and returned to the village to narrate the incident. The two of them told us that the armed gau rakshaks have captured Umar and they might bring him here for confrontation. We kept waiting for Umar, but there was no response,” said Khan. The crying family members are yet to come to terms with the death even after four days. (Image: Debayan Roy/News18)

The young man added that it was only after multiple rounds at the police station, were they able to locate his uncle.

“We were unable to ascertain Umar’s location and the Govindgarh police were also clueless. We had to go to the police station again the next day on November 11, when the police took our identity cards and said that a person was there at the Alwar mortuary. Then on November 12, when we saw the body, we identified it as Umar,” the nephew said.

When News18 got in touch with Tahir, who is undergoing treatment at a hospital in Haryana, he said that “it could have been Bajrang Dal members, but nothing could be seen in that mad rush to save a life”.

“We were bringing the cows to our village via Dausa, when suddenly some of these men started firing at us. I believe they were Bajrang Dal members and I started running into the fields and managed to escape with some injuries,” said Tahir.

Javed, who escaped unhurt, said that he saw around seven people in the car attacking them.

“Umar was at the side and Tahir was in between. Umar suddenly cried “arre mar gaya main” and we immediately decided to abandon the vehicle to save our lives. When I got down the road, they shot at me, but I escaped the bullet. I don’t know if they were gau rakshaks or not as they were in plain clothes and carrying weapons. There were around six to seven of them together. I took the route via Jhundain to reach my village,” said Javed who was driving the vehicle.

According to a JUH member, Tahir has identified the attackers as Rakesh, Bunty Gujjar, Ramlal Gujjar and Ramesh Meena.

Shaukat Khan, Sarpanch of Ghatmeeka village, who has been at the helm of village affairs over the past 30 years, spends most of his day in his front yard with his goats and cows. He refuses to believe that Umar could have been involved in “cattle smuggling”.

“I have been the Sarpanch for the past thirty years and each and every house here has cows. Cows are used only for milk and nothing else,” said Khan.

However, Khan has alleged that this was a case of cow trade racket being carried on by Gau Rakshaks gone wrong.

“These people are just dressed as Gau Rakshaks, but in reality they are nothing but goons. Each cow costs nothing less than Rs 12,000 and these Gau Rakshaks attack and kill those who are transporting the cows and then take these animals to another buyer who would pay anything above Rs 20,000. There has been several such incidents when Gau Rakshaks have even stopped empty trucks and robbed the driver,” said the Sarpanch, who also alleged that the “police works in cahoots with such gangs”. The family members have refused to let the police conduct a post-mortem on Umar's body. (Image: Debayan Roy/News18)

As police still remain tight-lipped about the link between Umar and a cattle smuggling racket, villagers say that Meo Panchayat Chairman, Sher Mohammad opened a can of worms when he claimed that “the cows were 100% for smuggling and slaughter”.

“It is a fact that the cows were being transported for slaughter and there is no truth in the statement when they say that it was only for dairy purposes. It is my community and I know that they are always involved in illegal trafficking of cows for slaughter. But my contention is that even if it was for slaughter, then who had given these men the right to kill and take law into their hands?” Mohammad told News18.

However, Sher Mohammad’s statement was completely rubbished by the villagers who believe that his loss in the 2014 Assembly elections have made him negative towards his own community.

“Sher Mohammad is a ‘dalal’ and now he is being fed money. He is upset as the village did not vote for him in the 2014 MLA elections and voted for Zahida Khan instead. He does not represent our cause and this is the worst end anyone can meet,” said Javed Khan.

Even Chowdhury Khurshid Ahmed dismissed Sher Mohammad saying he is not a representative of the Meo community and called him a ‘sell out’.

All that Maqsood Khan (18), Umar’s eldest son is able to recall amid his incessant cries are his father’s last call while on duty in Bangalore.

“I had spoken to my father (Umar) on the fateful day around noon time when I was in Bangalore. He was leaving for home after buying the cows and was very excited as it was the first time he was investing some money. A buffalo costs about a lakh and is beyond our means, but a cow costs around Rs 15,000-20,000, which is quite affordable for us,” said Khan.

Maqsood rushed back to Ghatmeeka at the news of his father’s death. Now he has been thrust with the responsibility of not only his seven siblings but also his mother, who is expecting her ninth child.

Surviving on injections, doctors have suggested that Umar’s wife might be getting critical if the mourning continues.

“My mother has not batted her eyes since for three nights straight and she keeps looking at our open door and wails. I cannot hear her cries anymore. Doctors have pierced innumerable syringes in her and that is the only thing that keeps her going. I wish to take her away somewhere,” said the 18-year-old head of the family.