United in Grief: For Riot-hit Hindu and Muslim Families of North-east Delhi, A Long Wait to Claim Bodies of Kin

Authorities at the Delhi government-run GTB Hospital said there was a delay in conducting post-mortem because the request to form a medical board had not been received from the police department in time.

New Delhi: Away from the hectic activity of patients getting wheeled into the casualty ward of Guru Teg Bahadur (GTB) Hospital in Dilshad Garden, five to six families, Hindus and Muslims, had stationed themselves side by side outside the hospital’s mortuary since Monday evening.

The family of Rahul Solanki, 26, who had died of bullet wounds, sat in one spot next to the morgue building of the Delhi government-run institute. Seated just a few feet away was 64-year-old Sadruddin. He had lost his 32-year-old son Mohammad Furqan to similar injuries.

On Wednesday, a sense of dissatisfaction and restlessness had crept into the members of these families and others like them who had been waiting since Monday evening to claim the bodies of their loved ones. Following the deadly violence in north-east Delhi beginning February 24, the maximum number of injured people, 200, were taken to GTB Hospital for treatment and 25 were brought dead.

However, the autopsies of those killed in the riots had not begun till late Wednesday morning. “There was some delay because the request to form a medical board had not been received from the police department and it has was received today from competent authorities,” said Sunil Kumar Gautam, medical superintendent, GTB Hospital.

“About 30-35% of those admitted in the hospital were cases of gunshot wound, about 60% of cases could be categorised as injuries inflicted by a blunt object and the rest were due to burns and stabbing,” he added.

For two days, most of the men from Solanki’s family had not moved from the institute. Shahbaz Alam, 26, the deceased's colleague and friend, was distraught over the long wait.

“He was brought dead to this hospital after three others refused to admit him. For two days, there was no formal communication from hospital authorities on when the bodies would be handed over. Even in the time of tragedy, his family has had to wait.”

During the wait outside the mortuary, Shweta Chauhan, 26, another friend of Solanki, reflected on the violence that erupted from the evening of Sunday, February 23.

“This violence and madness has to stop. The government has not done anything to control it. The situation has been so bad I have not been able to go back to my home in Karawal Nagar.”

Sadruddin, Mohammad Furqan’s father, said, “I have been living in this city for 40 years now. I witnessed the riots against Sikhs closely and I remember both Hindus and Muslims saved many Sikhs. Even in the past two days, we have seen people helping each other. However, it is unfortunate that those coming forward to help during riots are always outnumbered by the perpetrators of violence.”

Ashfaq Hussain, 22, was shot at five times on the chest. He was also attacked using swords.

“It happened at around 6pm yesterday. He was returning home after his day job as an electrician in Mustafabad. He was trying to save women being attacked in the local mosque. We brought him to the hospital at 7am. No post-mortem has been conducted till now. We have been waiting to take him home but the doctors say we need to wait. We have completed all formalities but they have not yet started the process," said Saleem, Ashfaq's maternal uncle. 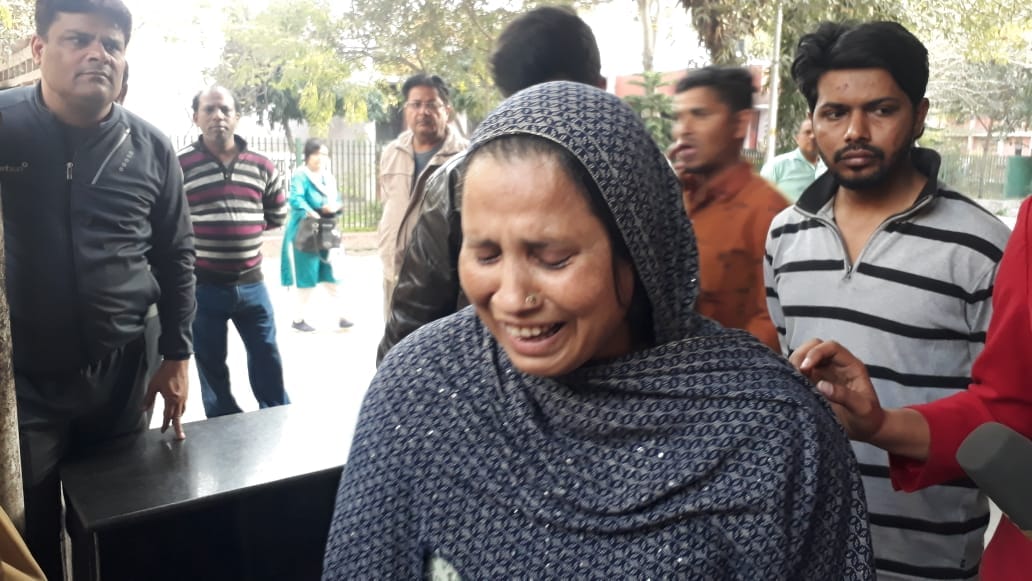 Aunt of Ashfaq Hussain, 22, killed in riot breaks down outside the morgue (Rounak Kumar Gunjan/News18)

Ashfaq's aunt informed News18 that he got married on February 14. "His wife's mehendi has also not worn off yet. What am I supposed to tell her? The hospital authorities are also not cooperating with us. First our child got killed, now they are not even letting us take him home," she said.

By late evening on Wednesday, five autopsies had been completed, Sunil Kumar Gautam confirmed and News18.com could establish that Solanki’s family had claimed his body. However, it could not be ascertained which other families were able to end their wait.

On the pavement next to the mortuary, the family of Brij Bhan Singh, 48, sat anxiously for any word on the autopsy. A father of three, Singh was shot in the back in Karawal Nagar while returning from work.

"We have been waiting since Tuesday. The hospital authorities have been delaying the process. They gave us no definite deadline as to when we will be able to have the post-mortem done. They asked us to come tomorrow," said Singh's brother.

"Family members back home are having a harrowing time. We are not even able to give them any assurance."

(With inputs from Rounak Kumar Gunjan)