The step also adds to the country’s efforts to revive indigenous cultures under PM Modi’s flagship project – ‘Vocal for Local’.

Taking his government’s ‘Make in India’ commitment to the international stage, Prime Minister Narendra Modi presented a line of gifts to world leaders at the G7 summit in Germany. From exquisite pottery pieces from Uttar Pradesh’s Nizamabad to Kashmir’s hand-knitted silk carpet, PM Modi’s gifts touched ancient Indian culture and local artisans, who are slowly fading due to the use of machine-made products.

Even though the majority of artistic pieces belonged to various regions of Uttar Pradesh, Chhattisgarh’s dokra art and Kashmir’s phenomenal silk work found place in the spectacular exhibition of India’s glory. The step also adds to the country’s efforts to revive indigenous cultures under PM Modi’s flagship project – ‘Vocal for Local’.

“The principle behind the choice of gifts clearly is diversity, giving centre stage to the talent of India’s local products and artisans and the same to act as a powerful tool to showcase Indian culture,” government officials said

A special technique is used to bring out the stellar black hue. While the pottery is inside the oven, it is ensured that there is no scope for oxygen to enter the oven and heat level remains high as presence of oxygen can turn the pottery red. Besides, its glaze comes from the high zinc content of the soil and the layer of mustard oil applied before firing the pottery.

Dokra Art is non–ferrous metal casting art using the lost-wax casting technique. This sort of metal casting has been used in India for over 4,000 years and is still used. This particular art-piece is a figure of ‘Nandi –The Meditative Bull’. According to Hindu mythology Nandi is considered as the vehicle (mount) of Lord Shiva, the lord of destruction. Gulabi Meenakari brooch and cufflink set from Varanasi, UP to US President Joe Biden

These cufflinks were prepared for the President with a matching brooch for the First Lady. Gulabi Meenakari is a GI-tagged art form.

The crockery is outlined with platinum metal paint in honour of Queen’s platinum jubilee being celebrated this year. Embossed outlines are laid on manually with Mehndi cone work.

Itr bottles in a zardozi box from Lucknow, UP to France President Emmanuel Macron

The Zari Zardozi box has been hand embroidered on khadi silk and satin tissue in colours of the French National Flag. The motifs are traditional Indo-Persian, lotus flowers hand embroidered.

Pietra dura or Marble inlay has its origins in Opus sectile, form of pietra dura popularised in medieval Roman world where materials were cut & inlaid into walls &floors to make a picture or pattern. 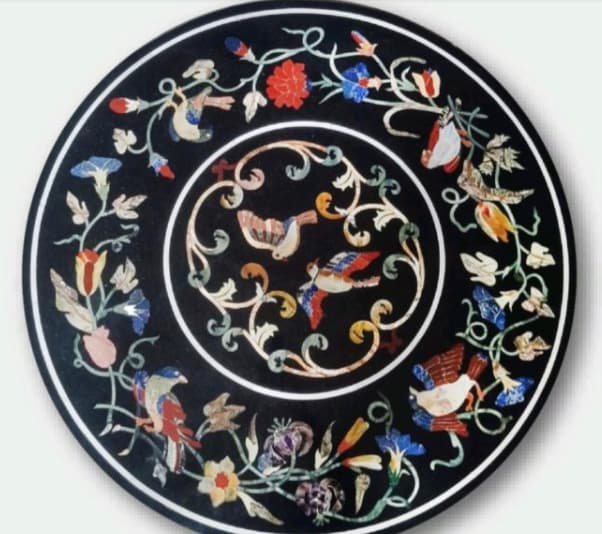 This nickel coated, hand engraved brass vessel is a masterpiece from District Moradabad, which is also known as the Peetal Nagari or “brass city” of Uttar Pradesh, India

Moonj baskets and cotton durries from Sitapur, UP to Senegal President Macky Sall

In Senegal, tradition of hand weaving is passed down from mother to daughter, adding to its importance as a vehicle for cultural expression &family livelihood, driven by strong women

The wooden statues of gods, goddesses and sacred animals served as coveted souvenirs taken back by pilgrims. This particular piece is made on Goolar (Botanical name: Ficus Racemosa) wood The hand-knitted silk carpets are famous all over the world for their softness. A Kashmiri Silk carpet is known for its beauty, perfectness, lushness, luxury & dedicated craftsmanship PM Modi on Tuesday left for a short visit to the UAE after attending the G7 summit in Germany on the sidelines of which he met several world leaders. “PM @narendramodi concludes his visit to Germany for the G7 Summit, wrapping up two days of productive discussions on sustainable solutions to global challenges, PM Modi now emplanes for Abu Dhabi for a brief stopover before reaching New Delhi,” the Ministry of External Affairs tweeted.

In the UAE, he will convey his personal condolences on the passing away of Sheikh Khalifa bin Zayed Al Nahyan, the former UAE President and Abu Dhabi ruler. Zayed Al Nahyan, who had been in office since 2004, died at the age of 73 after a long illness on May 13.