The PM asked Austin to convey his best wishes to Biden.

US Secretary of Defence Lloyd James Austin III, who arrived in New Delhi for a three-day visit to India earlier on Friday, called on Prime Minister Narendra Modi, the latter’s office said in a press release.

Austin conveyed greetings of US President Joe Biden to Modi, said the PMO.

Modi “welcomed the warm and close relationship between the two countries, which is rooted in shared values of democracy, pluralism and commitment to a rules-based order”, said the release. The PMO said Modi also outlined his vision for the strategic partnership between the India and US, and emphasised the important role of bilateral defence cooperation.

The PM asked Austin to convey his best wishes to Biden.

Pleasure to meet U.S. @SecDef Lloyd Austin today. Conveyed my best wishes to @POTUS @JoeBiden. India and US are committed to our strategic partnership that is a force for global good. pic.twitter.com/Z1AoGJlzFX

Austin said the US government was committed to strengthening the bilateral defence relations between the two countries, and expressed US’s strong desire to further enhance the strategic partnership for peace, stability and prosperity in the Indo-Pacific region and beyond, said the release. 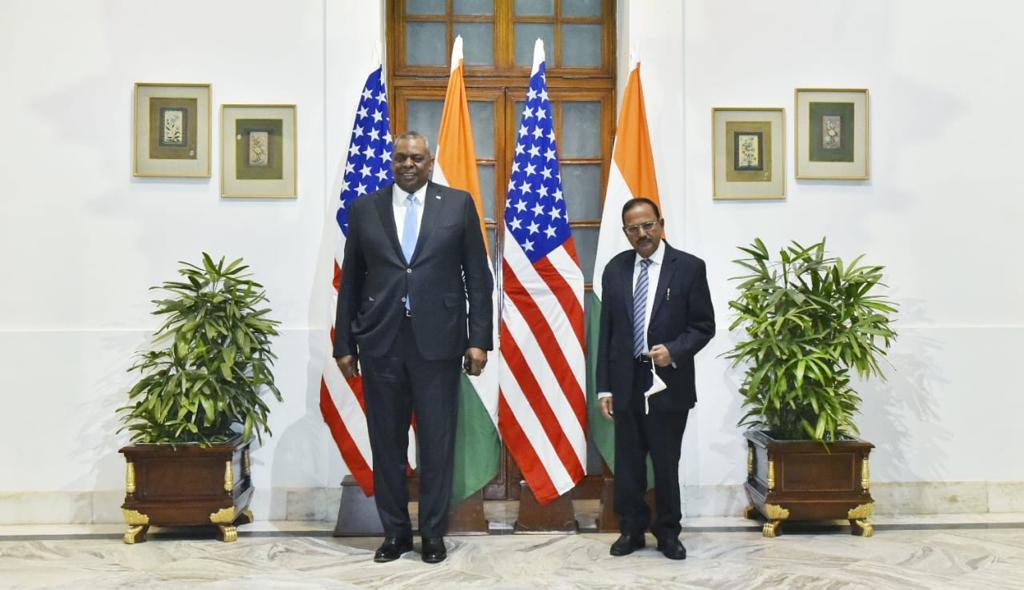 Defence Minister Rajnath Singh also extended his welcome to Austin. “Mr. Austin. Your visit to India is definitely going to further deepen the cooperation and partnership between India and the United States. Looking forward to our meeting tomorrow,” he said on Twitter.

India is the third stop for Austin during his three-nation first overseas tour as the Defence Secretary, and the visit is seen as a reflection of the Joe Biden administration’s strong commitment to its relations with its close allies and partners in the region. The US defence secretary visited Japan and South Korea before India.

The US official was received at the Palam airport by senior Indian military officials and diplomats from the American embassy. Ways to further accelerate India-US strategic ties, boosting cooperation in the Indo-Pacific, China’s aggressive behaviour in eastern Ladakh, challenge of terrorism and the Afghan peace process are expected to be focus of the talks between the two sides, people familiar with Austin’s visit said.

They said India’s plan to procure around 30 multi-mission armed Predator drones from the US for the three services at an estimated cost of over $ 3 billion is also expected to figure in the talks. The medium-altitude long-endurance (MALE) Predator-B drones, manufactured by US defence major General Atomics, are capable of remaining airborne for around 35 hours and can hunt down targets at land and sea, they said.

India’s plan to acquire 114 fighter jets at a cost of around $18 billion could also figure in the talks as American defence majors –Boeing and Lockheed -Martin– are eyeing it, the people said. Secretary Austin is set to have extensive talks with Rajnath Singh on Saturday. He is also likely to meet External Affairs Minister S Jaishankar.

His visit to India came days after the top leadership of the Quad grouping of India, the US, Japan and Australia vowed to expand their cooperation in the Indo-Pacific region. Ahead of Austin’s visit, Senator Robert Menendez, Chairman of the powerful Senate Foreign Relations Committee, wrote a letter to the US Defence Secretary, urging him to take up with Indian leaders the issue of New Delhi procuring Russian S-400 missile defence system.

Though democracy and human rights issues do not come under the domain of the Pentagon, Menendez also urged Austin to raise these concerns with Indian leaders.

In October 2018, India signed a $ 5 billion deal with Russia to buy five units of the S-400 air defence missile systems, notwithstanding a warning from the Trump administration that going ahead with the contract may invite US sanctions.

Recently, the US imposed sanctions on Turkey under the Countering America’s Adversaries Through Sanctions Act (CAATSA) for purchase of S-400 missiles from Russia. The evolving situation in the Indo-Pacific region in the wake of China’s increasing military muscle flexing has become a major talking point among leading global powers. The US has been favouring making Quad a security architecture to check China’s growing assertiveness.

The visit is also taking place at a time when India and China are looking to achieve the objective of disengagement from all friction points in eastern Ladakh after completing withdrawal of troops in the North and South banks of Pangong lake areas. Austin and Singh had a telephonic conversation on January 27.

The Indo-US defence ties have been on an upswing in the last few years. In June 2016, the US had designated India a “Major Defence Partner”.

The two countries have also inked key defence and security pacts over the past few years, including the Logistics Exchange Memorandum of Agreement (LEMOA) in 2016 that allows their militaries use each other’s bases for repair and replenishment of supplies as well as provides for deeper cooperation.

The two sides have also signed COMCASA (Communications Compatibility and Security Agreement) in 2018 that provides for interoperability between the two militaries and provides for sale of high end technology from the US to India.

In October last year, India and the US sealed the BECA (Basic Exchange and Cooperation Agreement) agreement to further boost bilateral defence ties. The pact provides for sharing of high-end military technology, logistics and geospatial maps between the two countries.