At least 23 people have lost their lives and 34 sustained injuries when 14 bogies of the Utkal Express, which runs on the Puri-Haridwar-Kalinga route, derailed on Saturday evening in Uttar Pradesh's Muzaffarnagar. The local administration officials have rushed to the spot, and the railway officials are fearing casualties. Anand Kumar, ADG Law and Order, told CNN-News18 that he was not in a position to comment on the reason behind the derailment.

NDRF DG Sanjay Kumar says about 60-70 injured people have been rescued so far and 20 dead bodies have been recovered. “I will go to the derailment site. Our teams there are fully equipped. We will rescue stranded people ASAP,” he says.

Trains diverted due to derailment

Two NDRF teams have reached the rescue site.  Several passengers are still believed to be trapped. Heavyweight cranes and gas cutters are being used to help those still stuck in the derailed bogeys. 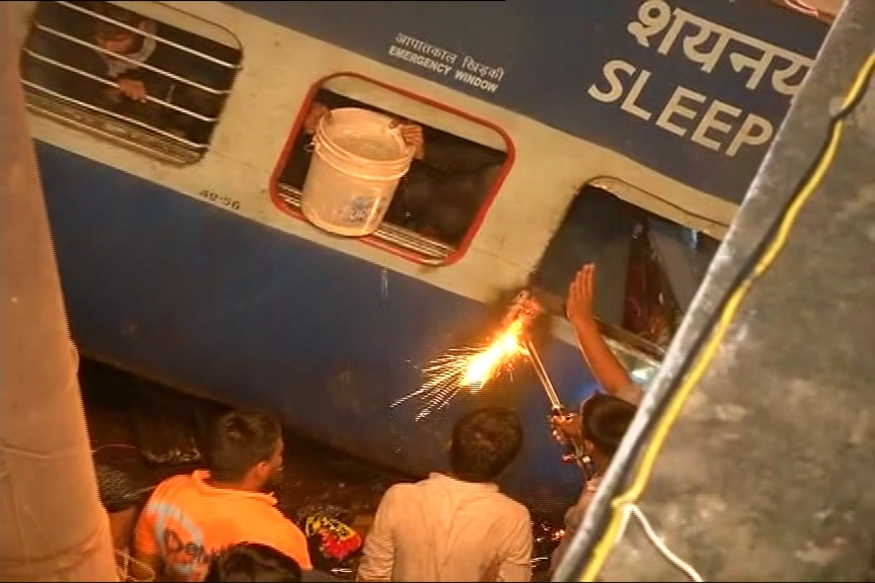 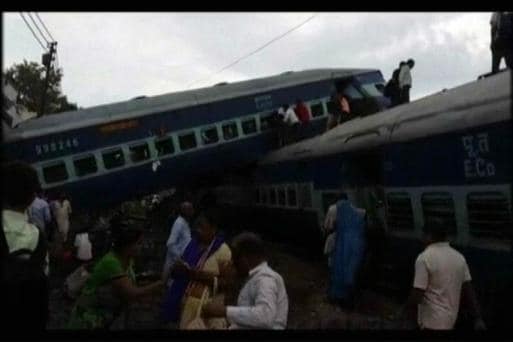 The Ministry of Railways in 2012 appointed Anil Kakodkar to head a high-level review committee to examine the safety aspects of Indian Railways and suggest improvements.

The official death toll has risen to 23, and is likely to rise further. In a press note, UP Police said 40 people are also injured in the Utkal Express train derailment. The injured are being taken to a local hospital in Khatauli.

Uttar Pradesh chief minister Yogi Adityanath announces Rs 2 lakh compensation for the kin of those killed in the Utkal Express derailment and Rs 50,000 for the injured. Railway Minister Suresh Prabhu has announced ex-gratia of Rs 3.5 Lakh for those who lost their lives and Rs 50 thousand for seriously injured. Odisha chief minister Naveen Patnaik has also announced Rs 5 lakh ex-gratia to the kin of any Odia passenger dead in Utkal Express derailment.

Uttar Pradesh deputy chief minister Dinesh Sharma told CNN-News18 that it was a sad incident. "I cannot say anything about the number of deaths and injuries until all the facts are on the table." Railways rescue workers are busy working, and ensuring that those injured in the accident are brought to hospitals. The government has ensured proper lighting facilities at the spot. The administration is currently in touch with local authorities, too, he said. 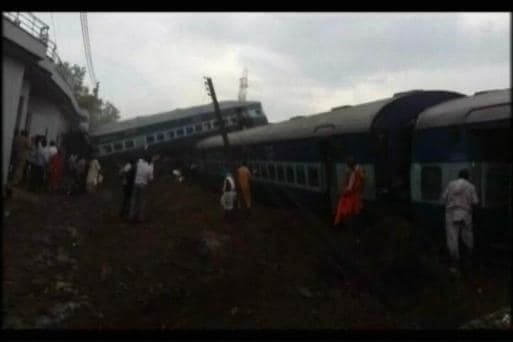 Twenty rail accidents - including some minor ones have been reported during Suresh Prabhu's tenure as Minister for Railways, since November 2014. In at least nine of these cases, casualties were reported.

#UPTrainTragedy -- Hospitals have been instructed by Yogi Adityanath govt to provide free treatment to injured passengers on Utkal Express pic.twitter.com/9bFVuL4WQ4

Four NDRF teams are being rushed to the accident site - three from Ghaziabad and one from Delhi. Besides, 35 ambulances, bread, butter, 1,000 food packets, additional private and state-run buses were being arranged, officials said. Volunteers are being mobilized from adjoining Meerut. Medical colleges, district hospitals and large number of private hospitals were being prepared to receive patients, said officials.

14 coaches got derailed. At this stage nothing can be said about the cause of accident: Railways spokesperson Anil Saxena #Muzaffarnagar pic.twitter.com/l2yimQIAmL


Railway Minister has announced ex-gratia of Rs 3.5 Lakh for those who lost their lives and Rs 50 thousand for seriously injured. Rs 25 thousand for people with minor injuries in the unfortunate accident has also been announced.

Ex gratia of Rs.3.5 Lakh for those who lost their lives,Rs.50 thousand for seriously injured 1/

Sad at train derailment in UP; my thoughts are with deceased & their families. Injured are being rescued & provided relief #PresidentKovind

Hospitals have been instructed by the Yogi Adityanath government to provide free treatment to injured passengers on Utkal Express, reports NDTV.

ADG Anand Kumar now revises the official death toll to 10. He says 30-40 people are seriously injured and 30 ambulances have reached the spot. The death toll is likely to rise further. Eyewitnesses say that a lot of passers-by near the track also run over by the train. “I saw bodies were covered with a sheet and just left at the spot,” said a local.

Shocked to know about the unfortunate accident of Utkal Express in Muzaffarnagar. My thoughts with the families who lost their loved ones

A lot of discrepancies in the number of injured at the moment. News agency Reuters reports while citing a government official that as many as 150 people have been injured due to the train derailment. ADG (Law and Order) Muzaffarnagar, Anand Kumar, says more than 50 injured. The official death toll is still at four.

PM Narendra Modi says he is extremely pained by the derailment of the Utkal Express in Muzaffarnagar. “My thoughts are with the families of the deceased. I wish those injured a speedy recovery. The situation is being monitored very closely by the Railways Ministry. Railways Ministry & UP Government are doing everything possible & providing all assistance required in the wake of the train derailment,” he said.

I wish those injured a speedy recovery. The situation is being monitored very closely by the Railways Ministry: PM @narendramodi

News18 speaks to the people who were rescued from the Puri-Haridwar-Kalinga Utkal Express. Listen in.

#UPTrainTragedy -- News18 speaks to the people who were rescued from the Puri-Haridwar-Kalinga express, listen in pic.twitter.com/4m4YyEo4sF

The Utkal Express entered a house near the track. The accident took place in a densely-populated area with houses lining both sides of the track. Uttar Pradesh chief minister Yogi Adityanath speaks to News18. “This is a very sad incident. The police and local administration have rushed to the spot. Two ministers from my cabinet are also there. Rescue operations are underway at war footing. I don’t know the exact number of casualties. My prayers are with all passengers and their families,” says Adityanath.

The politics over the train tragedy has already started. Lalu Prasad Yadav has demanded the resignation of railway minister Suresh Prabhu. “How will people travel, there is no guarantee of safety. Railway Minister should resign,” he said.

Latest visuals from the accident site. A crane being used to lift the bogeys and rescue trapped passengers. (Photo: CNN-News18 grab) 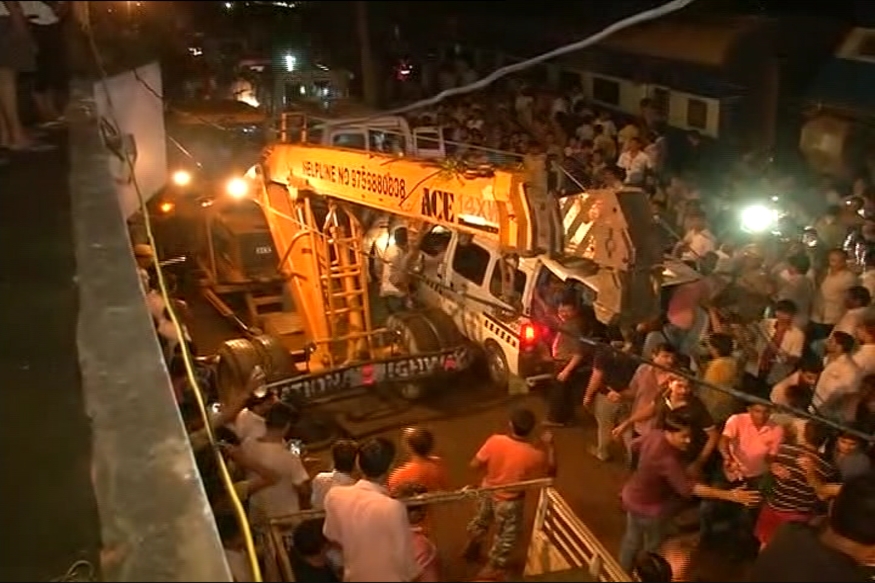 Odisha chief minister Naveen Patnaik has announced Rs 5 lakh ex-gratia to the kin of any Odia passenger dead in Utkal Express derailment. He also said Rs 50 thousand relief for those injured in the accident. Patnaik expressed concern at the loss of life in the derailment and directed commerce and transport department to work in coordination with Railway department and UP government to provide help to injured and kind of victims

A photo of the derailed train in Muzaffarnagar. (CNN-News18)