The Vande Bharat express will bring down the travel time between Delhi and Katra, the last station on the way to Vaishno Devi temple, to eight hours from the current 12 hours.

New Delhi: Union Home Minister Amit Shah on Thursday termed the new Vande Bharat Express between New Delhi and Katra as as a “Navratri gift” for Jammu and Kashmir, saying the service was an attempt by the railways to carry forward PM Narendra Modi’s ‘Make in India’ initiative.

“Travel for Vaishno Devi yatris will now become easier... Gandhiji inspired the entire world without giving any big and long speeches... his biggest message was swadeshi and today, we have a swadeshi railway being inaugurated," the Union minister said.

A Navratri gift for my sisters and brothers of Jammu as well as devotees of Maa Vaishno Devi!The New Vande Bharat Express from New Delhi to Maa Vaishno Devi, Katra will improve connectivity as well as spiritual tourism. Congratulations to everyone! #VandeBharatMaaKeDwar pic.twitter.com/gPwqlyTARV— Narendra Modi (@narendramodi) October 3, 2019

Train number 22439 New Delhi-Katra Vande Bharat Express will depart from the New Delhi railway station at 6am to reach Katra at 2pm. En route, the train will halt at Ambala Cantt, Ludhiana and Jammu Tawi for two minutes each. A view of the Vande Bharat Express 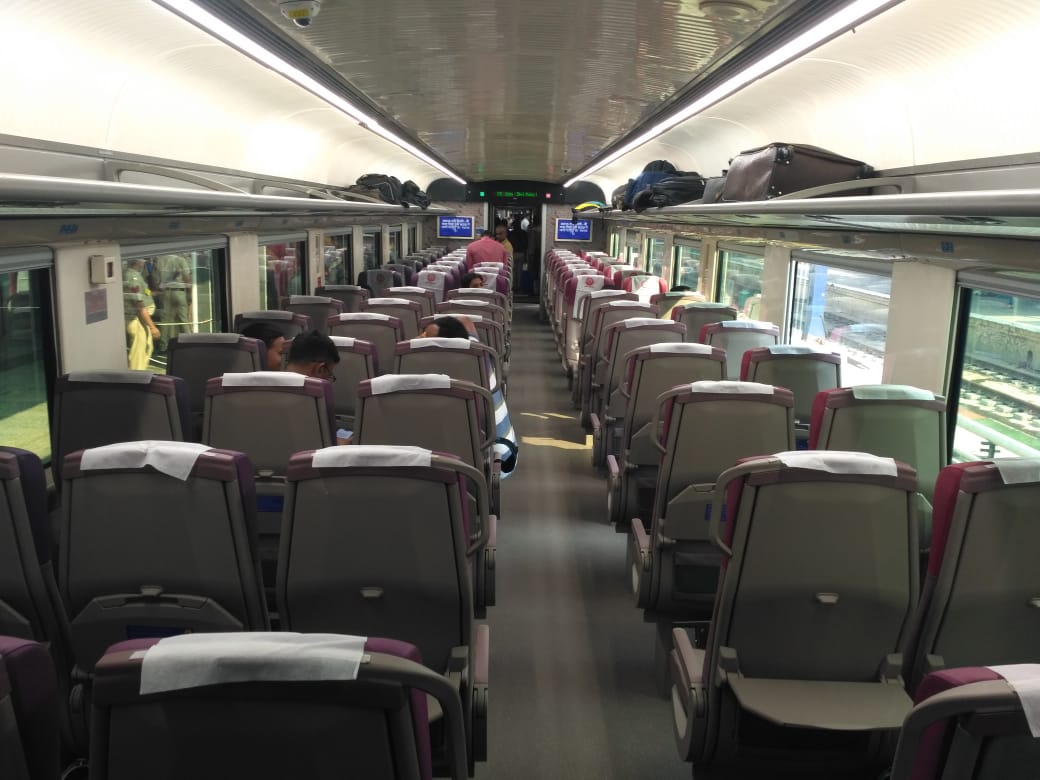 An inside view of Vande Bharat Express.

Train 18 will ply on all days of the week except for Tuesday.

The train will bring down the travel time between Delhi and Katra, the last station on the way to Vaishno Devi temple, to eight hours from the current 12 hours. Just like the previous version which runs between Delhi and Varanasi, the railways has not applied the dynamic fare principle on the new Vande Bharat train for Delhi-Katra.

The minimum fare for travelling between New Delhi (NDLS) to Sri Mata Vaishno Devi Katra (SVDK) will be Rs 1,630 and the maximum will be Rs 3,015. The train will run on all days of the week except Tuesdays.

The luxury all air-conditioned chair car service with 16 coaches is an engine-less self-propelled trainset which allows for faster acceleration and deceleration, therefore reducing travel time by 40 per cent. The train has plastic bottle crusher machines, a spacious pantry with a deep freezer, revolving seats and cattle guard among other features.

The train boasts of having bottle crushing machines for disposing off plastic bottles in view of Prime Minister Narendra Modi's message against single use plastic, an official said.

"In the first and the last coach, bottle crushing machines have been installed for disposing off plastic bottles. This has been done so that dumping off plastic waste can be reduced on the railway lines," the official said.

The train has revolving seats that be turned around to 180 degrees, 16 air conditioned coaches, including two executive class coaches and sensor doors that connect the coaches.

The train has continuous windows and the glasses have been provided with anti-spall films, the official said. Anti-spall films are a protective coating specifically designed to protect the window panes from the elements and protect passengers from any fragmentation.

Roller blind sun screen, which significantly reduce the sun's glare whilst still allowing light through has been provided on the look out glass to protect train pilots from glare and improved insulation has been provided to reduce noise level in the driver's cab.

It also has windows with a special provision to protect against stone-pelting and a cattle guard in the front to prevent damage to the train or derailment in case of cattle run.

The first Vande Bharat Express was flagged off by Prime Minister Narendra Modi. The railways is expected to manufacture 40 more such trains by 2022, according to senior officials.