VG Siddhartha Missing LIVE: VG Siddhartha, the founder of India's largest Coffee chain Cafe Coffee Day who also owns Asia's single-largest coffee estate, is missing since Monday evening. In a letter reportedly written by Siddhartha to the board of directors and his CCD family before he went missing, he said he had “failed to create the right profitable business model despite my best efforts”. He added, “I would like to say I gave it my all. I am very sorry to let down all the people that put their trust in me. I fought for a long time but today I gave up as I could not take any more pressure from one of the private equity partners forcing me to buy back shares….”

According to reports, Siddhartha got off from his car near a bridge across the Nethravathi River near Mangalore, about 375km from Bengaluru, but did not return even after an hour. A panicked driver went down looking for him, but could not find him anywhere. He then alerted the family members who in turn informed the police.

Axis Bank Tuesday said the Café Coffee Day group, whose founder-chairman VG Siddhartha has been missing since Monday night, has repaid some of the loans after he sold his over 20 per cent in software firm Mindtree to Larsen & Toubro recently, PTI reports.

Search operations for V G Siddhartha under the Mangaluru bridge suspended for now; will resume tomorrow 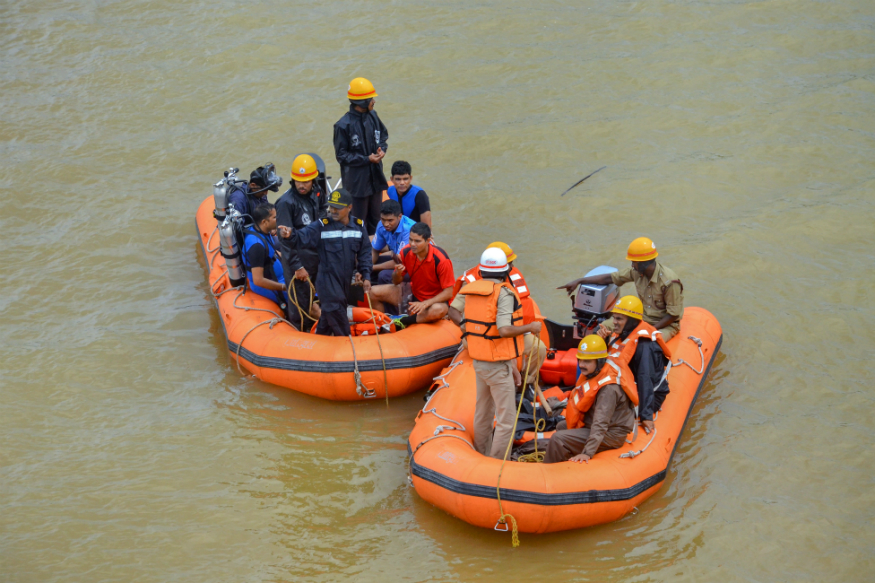 A Detailed Technical Investigation Underway | Mangaluru Police Commissioner Sandeep Patil said a police team has left for Bengaluru to conduct an inquiry and question office staff and relatives to gather more information. "A detailed technical investigation is also going on," he said.

Mangaluru Police Commissioner S Patil told ANI that one police team has gone to Bengaluru for further inquiry and rescue operations will continue until they get concrete results.

Mangaluru Police Commissioner S Patil: Y'day I met the family of Mr. #VGSiddhartha at his house, spoke to them about him. One team has gone to Bengaluru for further inquiry. The rescue operation has been going on since last night and will continue until we get concrete results. pic.twitter.com/oTlRihl0sF

VG Siddhartha’s story is a tragic end to a great success story; shocking to think that someone who created India’s Starbucks may have taken his life, says Kiran Mazumdar-Shaw tells CNBC-TV18

Search operation underway to trace VG Siddhartha, the founder of India's largest Coffee chain Cafe Coffee Day who has been missing since Monday evening. Teams of National Disaster Response Force (NDRF), Coast Guard, Home Guard, fire services and coastal police scoured the waters under a bridge across the swollen Nethravathi River, where 60-year old Siddhartha was reportedly last seen. Local fisherman, along with their boats, have also joined in the frantic search operations.

According to a PTI report, Karnataka Bank on Tuesday said it has no exposure to Coffee Day Enterprises, though the company's global unit has an outstanding loan of Rs 152 crore.

"This is to clarify that our bank does not have any exposure to Coffee Day Enterprises Ltd, an entity listed on BSE and National Stock Exchange of India Ltd," Karnataka Bank said. "However, Coffee Day Global, one of the unlisted group companies is enjoying credit facilities with the present outstanding of Rs 152.48 crore," it added.

Watch | VG Siddhartha, owner of the popular coffee chain Cafe Coffee Day and son-in-law of former Karnataka Chief Minister SM Krishna has gone missing near Mangaluru Since Monday evening. The company's board has held an emergency meeting following the disappearance of Siddhartha and also reviewed the letter purportedly signed by him.

“VG Siddhartha’s family gave us the letter, so it has to be genuine,” Mangaluru police commissioner Sandeep Patil tells CNN-News18

Biocon CMD Kiran Mazumdar Shaw in an exclusive conversation with CNN-News18 took a dig at the current system of financial investigations in India and said that we have "moved from license raj to inspector raj, which is seriously bothering India Inc". Read the full report here.

The Income Tax Department says the authenticity of the letter which is doing rounds on social media is not known and the signature in the letter doesn’t tally with Siddhartha’s as available in annual reports. 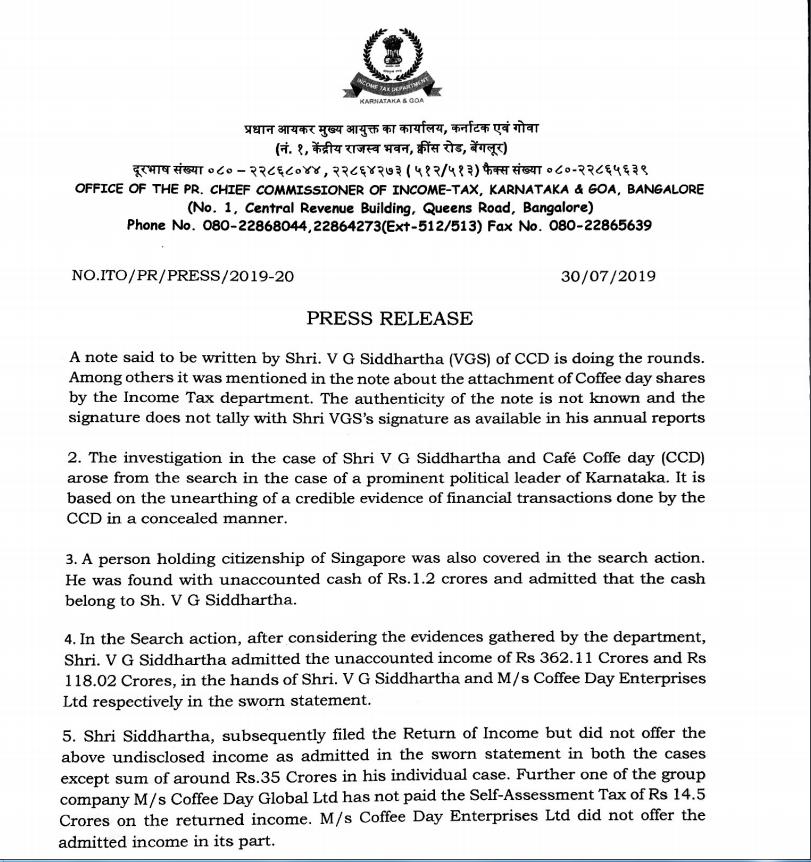 The Income Tax department had attached Mindtree shares held by Cafe Coffee Day owner VG Siddhartha without any notice, sources said on Tuesday. Siddhartha was under the scanner of I-T department and the ED for alleged irregularities in his association with information technology company Mindtree Ltd. Sources said that there was no demand made by the department before attaching the shares.

The Income Tax Department denied charges of harassment during their probe against Cafe Coffee Day promoter V G Siddhartha and official sources pointed out that the signatures of the entrepreneur available with them were different from those on a letter being widely published on the social media.

CCD Board Issues Statement After Emergency Meet | "The Board had an emergency meeting today. The Board is confident that the professional management of the Company and each of the entities in the Coffee Day Group and their respective leadership team, will ensure continuity of all business operations consistent with past behaviour. In the interim, the Board is evaluating and assessing the situation, formulating appropriate steps to ensure business operations are unaffected, and has resolved to co-operate with authorities," the satement reads.

“It’s a fact that we have moved from license raj to inspector raj,” Biocon CMD Kiran Mazumdar on VG Siddhartha’s missing.

#CCDFounderMissing – The letter, and the action that he has supposedly taken, is a reflection of the helplessness and hopelessness that his financial situation has brought to him: Biocon CMD Kiran Mazumdar-Shaw (@kiranshaw) tells @Zakka_Jacob. pic.twitter.com/3Ln72iYCQe

CMD of Biocon Kiran Mazumdar-Shaw says everyone who knew Siddhartha is shocked, the letter reportedly written by him shows his helplessness.

KKR in a statement Tuesday said it had invested in the popular coffee chain nine years ago and part-exited the investment last year.

The helicopter that was supposed to come from Kochi for rescue hasn't taken off due to adverse weather conditions, said Congress leader UT Khadar. "Even if it takes off now, we don't have much time before day light ends. We are seeing if search operations can continue through the night because 24-36 hours is crucial," he said.

Former Karnataka Chief Minister and Congress veteran Siddaramaiah meets SM Krishna, the former External Affairs Minister. He was accompanied by Ramesh Kumar, the former speaker of Karnataka Assembly who resigned yesterday after  CM Yediyurappa proved his majority on the floor of the house. Referring to the VG Siddhartha's missing case, Aam Aadmi Party's Raghav Chadha lashed out at the government at the Centre for "bad policies, never-ending regulatory compliances, political meddling and economic slowdown" for creating hurdle in the way of entrepreneurs, adding that it has come to "unease of doing business" in India.

When asked if there was any huge private debt, he said, "I have no idea if there are other private transactions that were made outside the company — we can only comment about the company’s balance sheets — whether it has assets to take care of the debt, which in this case, was not an issue at all. What Siddhartha did in his personal capacity, nobody knows."

One of the board of directors of Coffee Day Enterprise spoke to CNN-News18 on the condition of anonymity. When asked if there was any indication at all of such a thing happening, he said, "There was absolutely no indication on his part. In fact, if you look at the actual balance sheet of Coffee Day Enterprises, the debt portion had come down drastically after Siddhartha sold his Mindtree shares. The bulk of the portion that had gone at the time of the Initial Public Offering (IPO) in 2015, had gone for debt reduction. Subsequently, these Mindtree shares also went for that."


The Dakshina Kannada police have launched a massive search for him. According to his driver, Siddhartha, known as the Coffee King of India, was talking to someone on his mobile phone when he got off from the car near Kotekar.

The news of Siddhartha's disappearance has spread like wildfire across Karnataka and hundreds of his relatives and friends have gathered at his father-in-law and former Karnataka CM SM Krishna's house in Bengaluru.

Siddhartha is married to SM Krishna's first daughter Malavika. They have two sons. Besides Cafe Coffee Day, Siddhartha has founded a hospitality chain which runs a seven-star resort Serai and Cicada.

Siddhartha is from a coffee growing family in Chickmagalur district and made it big through his vision and hard work.

He first founded Cafe Coffee Day in mid 1990s on Brigade Road which has now become an international brand. He recently sold his stakes in a software company Mindtree for about Rs 3,000 crore. He was recently in the news for being in talks with Coca-Cola to sell CCD.

His chain of companies employ over 30,000 people across India.