The development comes in the backdrop of widespread protests in the Capital against the new citizenship law.

New Delhi: Delhi Police on Wednesday registered a case after a video of a cop asking students of Mukherjee Nagar to leave the Capital till January 2 in view of the “sensitive” law and order situation went viral.

In the video, the officer can be heard saying that owners of PGs, restaurants and coaching centres have been asked to leave the city. “Section 144 has been imposed so don’t gather or you’ll be booked for public nuisance,” he adds.

The students respond in the affirmative after his message.

However, responding to the video, DCP Northwest Delhi called it fake.

Fake messages are circulating in social media on closure of PGs/Hostels in Mukherjee Nagar area. We have registered a case against these fake messages. Appeal to all citizens to not believe these rumours. @DelhiPolice

Some notices were also found pasted on walls and shutters and police claimed these too were fake. A notice pasted on the shutter of a coaching centre. 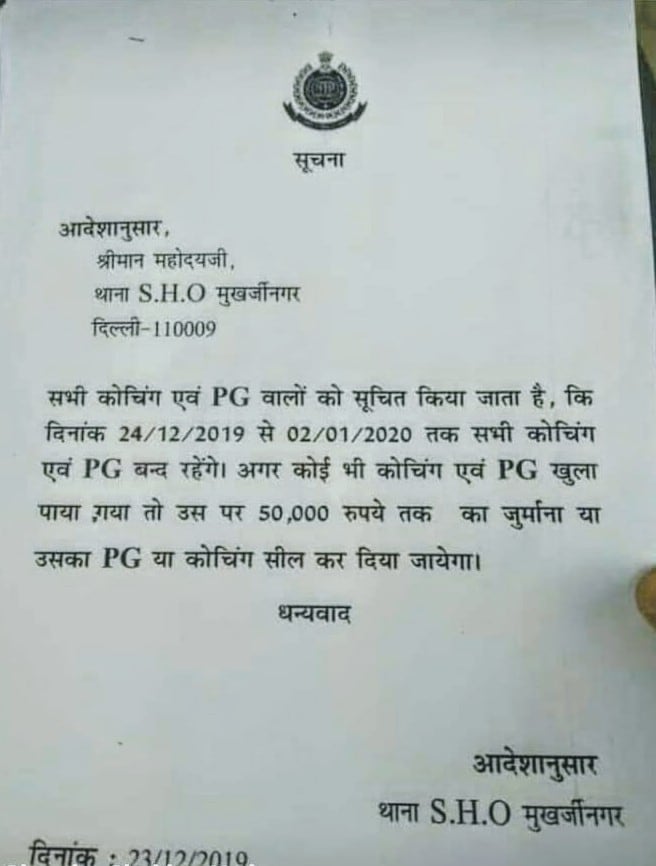 The notice by police.

The Capital has seen widespread protests against the new citizenship law that grants citizenship to Hindus, Sikhs, Jains, Parsis, Buddhists, and Christians fleeing religious persecution from Pakistan, Afghanistan, and Bangladesh who came to India on or before December 31, 2014.