After a few minutes, we saw two more people, each bearing a firearm and running towards the front of the crowd to fire shots at the other side.

A fire raging from a shop in Maujpur. (News18)

New Delhi: It was around noon, the peak of the intense communal violence in Maujpur that we saw a man holding a gun. He was a part of one of the many waves of rioters throwing stones, glass bottles, sticks, just about anything that could be lifted and hurled, at houses of the 'other' community.

After a few minutes, we saw two more people, each bearing a firearm and running towards the front of the crowd to fire shots at the other side. The police stood by idly all this while. Many gun-shot victims from this area were subsequently brought to GTB hospital for treatment. 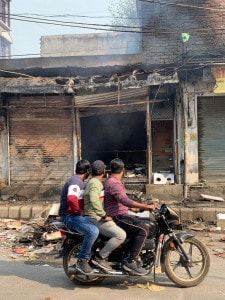 It was through the mob’s celebration, applause and cheer -- it rose from the frontlines and travelled all the way back -- that one got to know that a man had been 'hit'. It was in front of the police that the mob armed itself with stones and sticks. People could be seen, by turns, pushing a cart, loading stones on it and sending the full cart back to the bloodthirsty mob.

It was right in front of policemen and paramilitary personnel that many shops, in Maujpur and Gonda, were vandalised, looted and set on fire. News18 witnessed first-hand a mob of around 500 rioters on a road connecting Bhrampuri to Yamuna Vihar in Gonda set, one-by-one, seven shops on fire after looting them, along with many private as well as public vehicles.

Dense, black smoke from these shops could be seen rising from several miles away. And for miles around, as looting and arson was happening in daylight, one could hear shouts of religious slogans. After some paramilitary reinforcements arrived on the spot, the rioters sat down on the Maujpur chowk, where just two days earlier stones had been thrown and where BJP leader Kapil Mishra issued a threat - "we'll have to come on roads" - if police did not clear roads that were occupied by anti-CAA protesters.

At around 10:30 am, the rioters started playing communally provocative songs on a public address system at the same Maujpur chowk. Songs that threatened to kill those "who are asking for azadi". Again police stood by and allowed the songs to be played for a long time, and allowed for mob to swell. Parked right at that square, in full public view, were rods, sticks and helmets for the easy convenience of the mob.

Police suddenly swung into action and pressed in a tear-gas cannon. But very few of those over two dozen tear gas shells landed on this side of Maujpur. Some in the mob were seen congratulating and sharing friendly chats with the uniformed personnel. 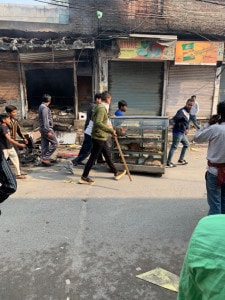 There were spells of absolute anarchy in which the mob seemed out to rampage everything in its view. At one point, a member of the mob spotted the name of a dentist from the other community slightly ahead of the Maujpur-Babarpur Metro station. This instigated many in the mob to throw stones at the hoarding. Only when the landlord rushed down and assured the irate mob of his community credentials did the stone-throwing stop.

In another instance, the rioters spotted a man shooting a video of the large-scale communal violence. The rioters threatened to kill him, broke the front entrance of his house which they were trying to break into forcibly until a middle-aged man appeared on the balcony and loudly shouted slogans that would please the mob. Only after he shouted it a dozen odd times was he able to pacify the anger of the mob, which then left that house and moved forward trying to find its next target.

Even after a DCP had arrived on the spot, slightly after 1 pm, with three buses full of armed policemen, there was no semblance of any order on ground. Journalists were being assaulted on the other end of Maujpur. Anyone looking dissimilar from the crowd was being mobbed in broad daylight. Many private cars with terrified families inside were pelted with stones with police standing by as spectators.

While violence unfolded in parts of Gonda, Brahmpuri and Maujpur, elders could be seen talking to aggressive youngsters, telling them how counter-productive the violence could be.

"Don't think it will stop with this. To every action, there is a reaction," an elderly man was overheard telling youngsters in Maujpur village. "You burn their houses and shops today, tomorrow these fires will also reach you. We have seen things. We're telling you this out of experience."

A few people from the village, on condition of anonymity, said those leading the incidents of arson were outsiders. "We don't recognise the people that are doing all this. These people have come from outside," said a resident of Gonda.