We Don't Need Ayodhya But Loan Waiver, Declare Farmers as They March Down Delhi

Social activists, including Medha Patkar and noted journalist P Sainath, extended their support to the rally and said the situation of farmers in the country has deteriorated to a level like never before.

New Delhi: There were farmers, young daughters whose fathers preferred suicide over living under a debt, widows whose husbands were devoured by the demon named agricultural crisis and tribals whose lands were snatched in the garb of commercialisation.

United by a growing farm distress, the army of agricultural workers marched down the streets of Delhi to press for their demands for higher crop prices, farm loan waivers, implementation of the Swaminathan report, among others. They will be marching to Parliament street on Friday.

The agricultural workers marched in from Nizamuddin, Sabzi Mandi Station, Anand Vihar Terminal and Bijwasan. Yogendra Yadav of Swaraj India led a 'Chalo Dilli' rally from Bijwasan to Ramlila Maidan, that has been joined by farmers from Odisha, Haryana, Rajasthan.

Two special trains carrying farmers, one from Maharashtra's Miraj and another from Bengaluru, were expected to reach Delhi.

Social activists, including Medha Patkar and noted journalist P Sainath, extended their support to the rally and said the situation of farmers in the country has deteriorated to a level like never before.

Many women farmers and students from Delhi University were also part of the rally to push the Centre to provide relief to the distressed farmers.

On Friday, under the umbrella body All India Kisan Sangharsh Coordination Committee (AIKSCC) they will march from Ramlila Maidan to the Parliament Street against the "anti-farmer" policies of the BJP-government and court arrest.

Swabhimani Shetkari Sanghatana leader and Member of Parliament Raju Shetti, who is also a part of the AIKSCC, introduced two Private Member's Bills in the Lok Sabha in 2017, seeking a loan waiver and a guaranteed remunerative prices for agricultural commodities based on the recommendations of the Swaminathan Commission.

The AIKSCC, which represents over 200 farm outfits, has demanded the Bills be discussed and passed in Parliament. It said 21 political parties have extended their support to the Bills and their representatives may visit the protest march on Friday. "I am one with the farmers in all their demands. The Indian state has been ungrateful to the point of cruelty to the farmers who feed the people of our country. This cannot go on. The Indian peasant's plight defines the nation's condition and the state needs to do everything to solve their problems.

"Their genuine grievances ought to be addressed by a special session of the country's parliament and concrete solutions should be sought," said Satchidanandan, a noted Indian poet and critic, who writes in Malayalam and English.

The group came together under the "Artists for Farmers" banner and joined the farmers entering Delhi from four different directions and will spend the night at the Ramlila Maidan. 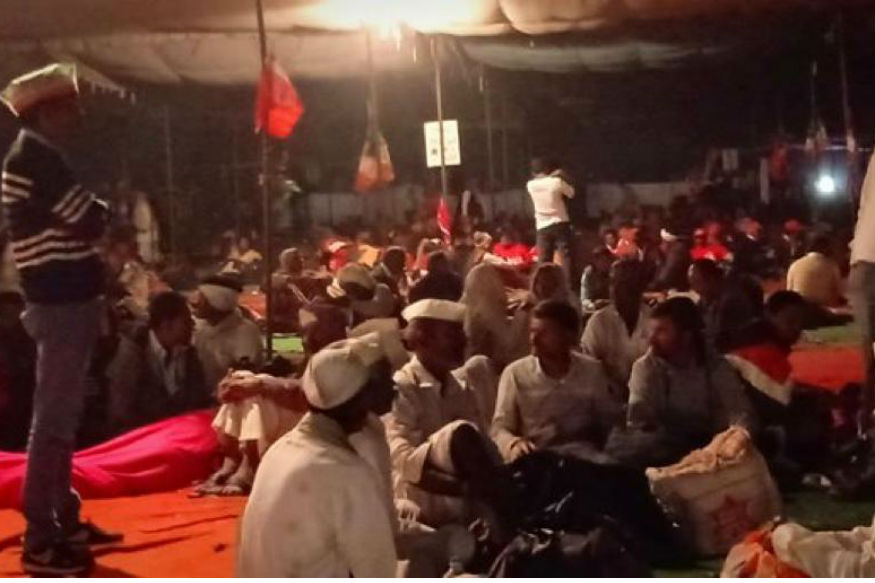 (Agitating farmers preparing for the night)

About 1,200 members of the National South Indian River Interlinking Agriculturalists Association reached the national capital in the early hours of Thursday carrying skulls of two of their colleagues who had committed suicide, their leader P Ayyakannu claimed.

The group from Tamil Nadu threatened to march naked if they are not allowed to go to Parliament on Friday. Last year, the group staged protests at Jantar Mantar with the skulls of eight farmers who killed themselves owing to farm losses. The two-day rally will be one of the largest congregations of farmers in Delhi, the AIKSCC has claimed. (Farmers waiting out at Dhaula Kuan in Delhi)

At Ramlila Maidan, it was a sea of red as farmers wearing caps and flags gathered, with some of them arriving here after completing a long journey of as long as 36 hours. The Maidan resonated with slogans of 'Ayodhya nahi, Karza maaf chahiye (We don't need Ayodhya but loan waiver)'.

Police said they have made elaborate arrangements for the rally on Friday, when the farmers will begin their march from Ramlila Ground to Parliament Street. Support for the farmers poured in with activists taking to Twitter to ask the general public to join the march. "Forces were deployed along the border areas and no tractor-trolley was allowed to get into Delhi," Senior Superintendent of Police (SSP), Ghaziabad, Upendra Agarwal said.

Meanwhile, the police said they have made elaborate arrangements for the farmers’ march that will start from Ramlila Maidan on Friday and move towards Parliament. There will be a rope on both the sides of the marching farmers with the police walking along with them to ensure traffic is not affected.