Weather Updates: As monsoon rain pummelled the Northeast, Cherrapunji in Meghalaya recorded a massive 811.6 mm of rainfall in 24 hours ending 8.30 am on Wednesday

Weather Updates: Fresh landslides were reported from various parts of Assam for the fourth consecutive day on Thursday amid incessant rainfall, which also led to heavy waterlogging in most parts. As monsoon rain pummelled the Northeast, Cherrapunji in Meghalaya recorded a massive 811.6 mm of rainfall in 24 hours ending 8.30 am on Wednesday, the highest in June since 1995, the India Meteorological Department (IMD) said. At an aerial distance Read More

Fresh landslides induced by incessant rainfall have blocked a road to country’s highest Shakti Peeth Kamakhya temple, atop Neelachal Hills in Assam’s Guwahati. Huge rocks came tumbling on the newly constructed road blocking vehicular movement. The landslide took place some time before Assam tourism minister Jayanta Mallah Baruah’s visit to the temple to take stock of arrangement for the ensuing Ambubasi Mela from June 22. This is the second landslide in a week’s time on the vital road.

A road in Lumshnong area in Meghalaya got damaged badly due to the unrelenting heavy downpour.

Parts of the road in Lumshnong, Meghalaya have been damaged badly due to the unrelenting heavy downpour.#rainfall #meghalaya pic.twitter.com/IVkOEq17MX

The IMD has predicted heavy rainfall at isolated places over Assam’s Darrang and Kamrup Metro districts in the next 24 hours.

Meghalaya CM Expresses Grief Over Death of 3 Due to Landslides

Meghalaya Chief Minister Conrad Sangma has expressed grief over the loss of three lives in the landslide in Laitlarem in Mawphlang block in state’s East Khasi Hills district. He tweeted, “Govt. will release ex gratia of Rs 4 Lakhs to the next of kin of each of the deceased. I extend my deepest condolences.”

I pray for speedy recovery of the other 4 members of the family injured during the incident.@AmitShah @DC_EKH

The southwest monsoon is likely to hit Jharkhand within 48 hours, weather officials said on Thursday. Parts of Jharkhand are experiencing a change in weather with cloudy sky and light to moderate rainfall from Wednesday, which makes conditions favourable for further advancement of the monsoon, officials said. The normal date for monsoon onset in Jharkhand is June 10. It, however, hit Jharkhand between June 12 and June 25 since 2010, according to the monsoon onset record of Ranchi Meteorological Centre. In 2021, the monsoon broke in Jharkhand on June 12.

Southwest Monsoon set in over Odisha on Thursday touching southern parts of the coastal state, the Indian Meteorological Department said. Though the monsoon usually reaches Odisha between June 10 and June 12, its onset was delayed by at least four days this time. Southwest Monsoon covered Malkangiri, Koraput, and Nawarangpur districts and some parts of Nuapada, Kalahandi, and Rayagada districts of Odisha, the IMD said in a statement. Conditions are favourable for the advance of monsoon into some more parts of Odisha during the next 2-3 days, it said. The MeT office said Malkangiri and Koraput districts have been experiencing pre-monsoon activities in the past two days. The arrival of the monsoon has brought relief for the farmers as the state has recorded nearly 70 per cent deficient rainfall by June 15.

Assam Football Women member Juge Moupriya Bhoumick was seen catching fish near the city roads in front of UC Academy School in Kokrajhar Assam. “My mother did not allow to cook the fish so I kept them in the aquarium,” she said.

If you have not seen this rain, you possibly have not seen the Monsoon at its fiercest form in the Wettest Place on Earth. It has been raining khyndai miet khyndai sngi” (nine nights, nine days) in Mawsynram. With the last week of the summer vacation in hand, it’s possibly the best time to be in the Scotland of the east, Shillong, Meghalaya. If you belong to the adventure loving creed then you can move ahead to Mawsynram, the wettest place on earth.

However on the 16th of June, the rains had hit Mawsynram hard brining all tourist vehicles to a standstill. The rain gushed upwards from the valley as strong gale made the tempest spray like a strong jet. Rain appeared like mist and the weather resembled winters in Nainital.

The Kynrem falls, today didn’t take its usual vertical descend instead took the horizontal route falling on the road leading to Mawsynram. The breath taking Syntein falls gushed down billions tons of water inflated by the relentless rain on the road making it impossible for the vehicles to pass through.

The furious brook at Umtyngar rose to the level of the road which looked like the sea with tourist vehicles plying on high sea. Mawsynram the wettest place on the earth, this early monsoon have been receiving excess rains making it more wet and moist. Mawsynram, is shaped by the monsoon rains. Mawsynram in Meghalaya receives an average annual rainfall of 11,872mm khyndai miet khyndai sngi” (nine nights, nine days) mentioned a lot whenever its residents talk about the monsoon. The region receives heavy rainfall owing to its high elevation, which cools the moisture-laden winds from the Bay of Bengal and the plains, leading to cloud formation and, eventually, rain.

A commuter saved himself from a disaster by a whisker as the culvert road he was walking across caved in due to floods in the Barpeta Manas National Park today. 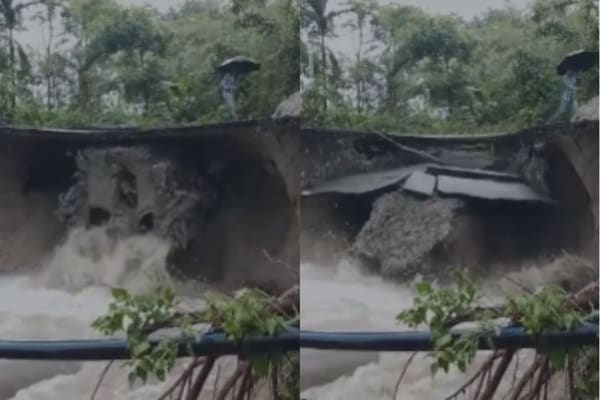 Two minor siblings were buried alive after landslides hit Assam in the second wave of floods in the northeastern state. The incident occurred in Azad Nagar of Goalpara district when Hussain Ali and Asma Khatun, children of Asir Uddin Sikdar, got buried in the debris of the landslide.

To assess the prevalent situations across the State & the damages caused due to incessant rains, a meeting was held with the District Administration (DA) of all districts & Departments to take stock of the ground situation@PMOIndia @AmitShah pic.twitter.com/e31bGv3gDb

The national capital witnessed clear skies and a pleasant morning on Thursday as the city’s minimum temperature plummeted by four degrees after an overnight rain, with more predicted during the day. The weather office has predicted light to moderate thundershower towards the evening. According to the weather office, the minimum temperature on Thursday was recorded at 23.8 degrees Celsius, four notches below the season’s average. It said that in last 24 hours (8.30 am on Wednesday to 8.30 am on Thursday) the city received 2 mm rainfall. There will be generally cloudy sky and light to moderate thundershowers are expected towards evening or night accompanied with gusty winds, an official of the India Meteorological Department (IMD) said. The IMD has also issued a yellow alert, warning of thundershowers or light rain over the next six days. The IMD said that the maximum temperature on Thursday is likely to hover around 39 degrees Celsius. The maximum temperature on Wednesday had settled at 42.2 degrees Celsius, three notches above the normal.

Several areas experienced waterlogging hours after rains lashed out parts of the national capital region on the intervening night of Wednesday and Thursday, causing traffic jams early in the morning. Traffic was moving slowly on Pandav Nagar and Bhairav Baba roads in the national capital, according to images.

Monsoon likely to advance into Gangetic West Bengal by Friday

Due to the unrelenting heavy downpour, some parts of the road on NH06 under Lumshnong Police Station have been damaged badly, and Heavy Motor Vehicles (Trucks, Buses) would be unable to pass and hence commuters in HMVs(Trucks, Buses) are advised not to take this route. Concerned departments have been informed for quick necessary action to restore normalcy. Stranded passengers and drivers are being provided with necessary assistance

In disturbing visuals from Meghalaya, landslides wash off a portion of the road connecting South Assam Tripura and Mizoram. One side of the road closed for transport, and another side is allowing only restricted movement.

According to the India Meteorological Department, thunderstorms with light to moderate rains are expected in Delhi and Haryana on Thursday. Thunderstorms with light to moderate intensity rain and gusty winds are expected to occur over and near a few locations in North Delhi, North-West Delhi, West Delhi (Bawana, Mundaka), Sonipat, and Kharkhoda (Haryana) over the next two hours, according to the IMD.

The gusty winds are expected to reach speeds of 30-40 kilometres per hour, according to the IMD.

According to the IMD, a ‘orange alert’ was issued for Delhi and other nearby areas on June 7 due to a severe heatwave with temperatures ranging from 44 to 47 degrees Celsius.

These are the findings of “District-Level Changes in Climate: Historical Climate and Climate Change Projections for the North-Eastern States of India” by the Centre for Study of Science, Technology and Policy (CSTEP), a Bengaluru-based think tank.

The study projects changes in temperature and rainfall patterns in Arunachal Pradesh, Assam, Manipur, Meghalaya, Mizoram, Nagaland, Sikkim, and Tripura over the next three decades (from 2021 till 2050) and compares it to the historical period (from 1990 to 2019).

Meghalaya CM Expresses Grief Over Death of 3 Due to Landslides

Light Rain in Parts of Delhi

of 10 km from Cherrapunji, Mawsynram, the wettest place in India, gauged 710.6 mm of rainfall in the same period, the maximum since June 1966.

One of the wettest places in the world, Cherrapunji has recorded more than 750 mm of precipitation on a June day on 10 occasions since the IMD started keeping records, the IMD data showed. On June 16, 1995, the town nestled in the East Khasi Hills gauged 1563.3 mm of rainfall. A day before, on June 15, 1995, it received 930 mm of precipitation.

“Mawsynram is at present the wettest place in India, with an average annual rainfall of 11802.4 mm (average of the 1974-2022 period). Cherrapunji receives 11359.4 mm of rainfall in a year (average of the 1971-2020 period),” Sunit Das, Scientist E at IMD’s regional centre in Guwahati told PTI. The Met office said the southwest monsoon further advanced into more parts of Maharashtra, Karnataka, Tamil Nadu and coastal Andhra Pradesh on Wednesday.

It said the ongoing spell of intense rainfall is likely to continue in the northeast and sub-Himalayan West Bengal and Sikkim during the next five days. “Under the influence of strong southwesterly winds from the Bay of Bengal in lower tropospheric levels and a trough in westerlies in middle tropospheric levels, isolated extremely heavy rainfall is likely over Arunachal Pradesh on June 15; over Assam and Meghalaya on June 15-16 and sub-Himalayan West Bengal and Sikkim till June 17,” it said.

Meanwhile, southwest monsoon set in over Odisha today touching southern parts of the coastal state, the Indian Meteorological Department said. Though the monsoon usually reaches Odisha between June 10 and June 12, its onset was delayed by at least four days this time. Southwest Monsoon covered Malkangiri, Koraput, and Nawarangpur districts and some parts of Nuapada, Kalahandi, and Rayagada districts of Odisha, the IMD said in a statement. Conditions are favourable for the advance of monsoon into some more parts of Odisha during the next 2-3 days, it said.

The MeT office said Malkangiri and Koraput districts have been experiencing pre-monsoon activities in the past two days. The arrival of the monsoon has brought relief for the farmers as the state has recorded nearly 70 per cent deficient rainfall by June 15.