Maharashtra-Mumbai Monsoon Weather Updates: The IMD has also predicted heavy to very heavy rain in neighbouring Thane district for the next few days

Maharashtra-Mumbai Monsoon Weather Update: Mumbai and its adjoining areas on Tuesday witnessed heavy rains, which led to waterlogging at various places including railway tracks. The India Meteorological Department (IMD) has predicted widespread rain in Maharashtra for the next five days. The island city (south Mumbai) received an average of 95.81 mm of rainfall in the 24-hour period ending at 8 am on Tuesday, while the Read More

Heavy rains lashed Goa today, leaving several bridges, roads and low lying areas inundated, while the IMD said similar weather could be expected in the coastal state for another five days. An official said damage to property and losses caused by the heavy rains that started on Monday have not been assessed yet. Issuing a warning of heavy rains, the IMD, in a media statement, said, “South West Monsoon was vigorous over the state of Goa. Very heavy rainfall occurred at most places with extremely heavy rainfall occurring at isolated places over the state of Goa.” There is likelihood of enhanced rainfall activity over North and South Goa in coming five days, the IMD release issued in the evening here added. Fisherfolk are advised not to venture along and off South Maharashtra-Goa-Karnataka coasts for 5 days from July 5, the IMD said.

Four arterial subways in the north-west part of Mumbai had to be closed for traffic on Tuesday due to heavy rains since the early hours of the day, officials said. These subways, namely Golibar, Milan, Andheri and Malad connect the east and west stretches of the north-western suburbs, which are otherwise divided by Western Railway tracks. “Motorists have been diverted to alternate routes due to the closure of these four subways at present. Rains have caused traffic snarls in several places, leading to vehicles moving at snail’s pace or getting stalled for long periods,” a traffic police official said. In Chamunda Circle in Borivali, traffic was disrupted for some time after an autorickshaw overturned, though no one was injured in the incident, while in areas close to Kalina University in Santa Cruz, vehicles were facing bottlenecks on the way to Kurla, the official said.

Amid the heavy rains in parts of Maharashtra, Chief Minister Eknath Shinde today reached BMC headquarters’ disaster management room in Mumbai and took a stock of the situation of the city. He is likely to address the media after this.

Several Parts of Thane Inundated Due to Heavy Rains

Several parts of Thane city and surrounding towns in Maharashtra were inundated and incidents of wall collapse were reported, due to incessant rainfall in these areas on Tuesday, an official said. Local firemen attended to several tree falls, with six such incidents being reported in Thane city alone, chief of the regional disaster management cell (RDMC) said. A high protection wall of a housing complex collapsed on Tikujiniwadi road around 10.45 am. A huge tree fell on the wall, causing it to collapse, he said, adding that the rest of the structure was in a precarious condition. Local firemen and RDMC team rushed to the scene to clear the debris and tree from the road, which was blocked, the official said. Meanwhile, as many as 17 families, who were affected due to a wall collapse at a chawl in Mumbra on Monday, have been accommodated at a civic school, the authorities said.

Congress leader Milind Deora has shared morning visuals from waterlogged Andheri subway in Mumbai. He tweeted, “The monsoons have barely arrived and Mumbai is waterlogged. This, despite MCGM being India’s richest civic body with an annual budget of Rs 40,000 Crore. Money literally down the drain (or in somebody’s pocket?).”

The monsoons have barely arrived & Mumbai is waterlogged. This, despite MCGM being India’s richest civic body with an annual budget of ₹40,000 Crore.

Money literally down the drain (or in somebody’s pocket?).pic.twitter.com/LpE6n6VFDk

Amarnath Yatra Suspended Due to Inclement Weather in Kashmir

The Amarnath Yatra, which has been going on in Kashmir since June 30, was suspended on Tuesday due to inclement weather. No group of pilgrims was allowed to proceed from the Nunwan base camp in Pahalgam and Baltal route towards the holy shrine located in the south Kashmir Himalayas. According to the administration, the decision was taken to ensure the safety of pilgrims. Read More

As per requisition, two teams of NDRF have been deployed in Kolhapur, Mumbai after a yellow alert of heavy rains in the ghat areas today was issued: NDRF pic.twitter.com/PdCYnpLNvr

Heavy rains lashed parts of popular hill station Mahabaleshwar and neighbouring areas of western Maharashtra and the Konkan region over the last 24 hours, as a result of which the water level of the Koyna dam was going up, officials said on Tuesday. The India Meteorological Department (IMD) has issued a ‘yellow alert’ for Satara district, where Mahabaleshwar and the Koyna dam are located, predicting heavy rains on Tuesday and the next two days at isolated places in some areas of the Western Ghats.

It has also issued an ‘orange alert’ for Friday, forecasting heavy to very heavy rains in isolated areas of the ghats. The MeT department issues four colour-coded predictions based on the prevailing weather systems. The green colour indicates no warning, yellow is to keep a watch, orange is to stay alert, while red means a warning and that action needs to be taken.

An IMD official said there will be vigorous activity in four sub-divisions of the state. “Konkan-Goa and Ghats of madhya Maharashtra are likely to get isolated extremely heavy rainfall (20.5 cm or more) in 24 hours,” the official said. With the improvement in rain activity in the catchment areas of the Koyna dam, its water level is also steadily rising, according to the district disaster control cell. “Mahabaleshwar received 129 mm rainfall in the last 24 hours, while the Koyna and Navaja dams received 74 mm and 118 mm rainfall, respectively, since Monday,” an official from the Satara district administration said.

A man and his 10yearold nephew died after being struck by lightning amid heavy rains at a village in Chhattisgarh’s Korba district, police said on Tuesday. The incident took place on Monday at Badebanka village in Katghora police station area, where the victims, Dilip Rohidas (21) and his nephew Vicky Rohidas, had gone fishing in a pond, an official said. The victims and two others, all hailing from Malda village, had gone fishing when it started raining heavily, he said.

In view of the rainfall alert in Mumbai, Maharashtra CM Eknath Shinde to visit BMC’s disaster control room at 4 pm to take stock of the preparedness.

Heavy and incessant rainfall on Tuesday disrupted normal life in several regions of Karnataka with holidays announced for educational institutions.

Meanwhile, search for a schoolgirl, who was washed away by floods while returning home from school in Thogarihankal Gram Panchayat limits in Chikkamagalur districton on Monday, resumed. The girl was returning home with her elder brother and friends.

Rainy weather continued in Bengaluru and with drizzles and cold waves, the capital city has turned into a hill station. However, rains have played havoc in hilly regions of the state.

The IMD’s Regional Meteorological Centre has forecast heavy rains in Mumbai and coastal Maharashtra for the next four days, with an Orange Alert sounded.

The entire west coast from Gujarat, Maharashtra, Goa, Karnataka and Kerala is covered with dense clouds with the possibility of very heavy to heavy rains, and isolated extremely heavy rains for the coastal regions plus central and western Maharashtra, said IMD-Pune head K. S. Hosalikar.

The state government is keeping an eagle eye on the monsoon situation unfolding in different areas and has kept teams of NDRF, SDRF and other disaster agencies on high alert to be deployed at short notice.

Other coastal districts of Palghar, Thane, Raigad, Ratnagiri and Sindhudurg were also lashed by heavy rains with big and small local rivers swelling above the danger levels.

Many towns like Chiplun, Vaibhavwadi, Ambet, Khed, Poladpur and others were flooded with road traffic closed, and a minor hillslide reported in a couple of areas in the Western Ghats in Ratnagiri district.

Villagers living in the vicinity of landslide or hillslide prone areas and on the banks of rivers or the Arabian Sea have been put on high alert with the major Vashishth and Jagbudi rivers flooded and flowing above the danger marks in some areas.

The Kundalika river has also crossed the danger mark, while Amba, Savitri, Patalganga, Ulhas and Gadi rivers are flowing close to the danger levels.

Personally monitoring, Chief Minister Eknath Shinde has put all districts on high alert and directed them to make all arrangements including shifting of people living in vulnerable areas as the incessant rains continued.

Expect heavy rains to continue till late in the night today. Peak rains today beweeen 1.30 pm to 4.30 pm. Tomorrow #MumbaiRains will give us respite. All catchment areas around mumbai to receive heavy rains in the evening today. pic.twitter.com/QW6d2f0Ibi

The IMD on Tuesday issued a heavy rainfall alert for Maharashtra over the next four days, following which Chief Minister Eknath Shinde directed the state administration officials to take precautions and ensure there is no loss of life or property. The Kundalika river in Raigad district, located near Mumbai, has crossed the danger mark, as per an official statement. Mumbai and some of its neighbouring districts witnessed heavy rains and flooding on Tuesday morning. The IMD has issued an ‘orange alert’ for south Konkan region and Goa and a ‘yellow alert’ for north Konkan, north central and south central Maharashtra and Marathwada regions.

The MeT department issues four colour-coded predictions based on the prevailing weather systems. The green colour indicates no warning, yellow is to keep a watch, orange is to stay alert, while red means a warning and that action needs to be taken. The Marathwada region is likely to witness thunderstorms accompanied with lightning, heavy rain and gusty winds with a speed of 40-50 kmph, the IMD said. The Chief Minister’s Office in a statement said CM Shinde is in touch with collectors of Thane, Raigad, Palghar, Ratnagiri and Sindhudurg districts. The National Disaster Response Force has also been asked to remain alert. 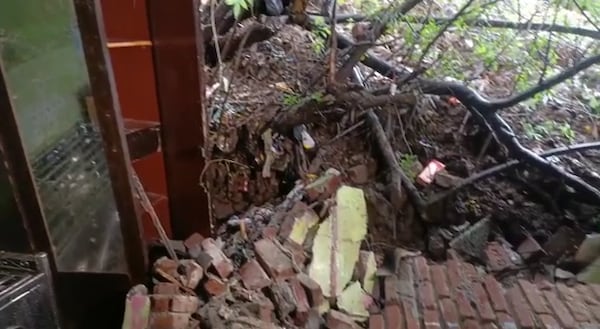 Amarnath Yatra Suspended Due to Inclement Weather in Kashmir

Between 8 am and 11.30 am on Tuesday, the island city received an average 41 mm rainfall, while the eastern and western suburbs got 85 mm and 55 mm showers, respectively, the Brihanmumbai Municipal Corporation (BMC) officials said.

Some commuters also complained about heavy waterlogging in some subways in Panvel, Khandeshwar and Mansarovar stations on the Harbour line in neighbouring Navi Mumbai, forcing them to wade through ankle-deep water. Over 75 lakh commuters from Mumbai and neighbouring districts travel in local trains every day.

The BEST undertaking, which provides public bus services in Mumbai and neighbouring cities, was forced to divert its buses via alternate routes, due to inundation in Sion, Chembur, Bandra, Air India Colony, Kurla and few other locations, an official said.

Traffic police personnel were deployed at various locations to avoid vehicular congestion due to the heavy rains, an official said.