Weather News: The IMD issued a heavy rainfall alert for Maharashtra today and the next two days, as state capital Mumbai continued to witness heavy downpour for the third consecutive day

Weather News: Himachal Pradesh Chief Minister Jai Ram Thakur on Wednesday said that five people went missing after flash floods triggered by a cloudburst at Manikaran in Himachal Pradesh’s Kullu district were reported at around 6 am. Rescue operations are currently underway in the affected areas to pull out those trapped. A bridge across River Parvati was damaged following the incident. Read More

Maha: 12 Hamlets Cut Off After Bridge Gets Flooded in Palghar

At least 12 hamlets were cut off after a bridge got flooded due to heavy rains and flooding in Maharashtra’s Palghar district, an official said on Wednesday. According to authorities, Pandartara bridge, which connects Usgaon in Vasai taluka, was inundated and submerged because of incessant rainfall in the region. At least 12 hamlets in the region are cut off and the situation will remain so for a couple of days till the water recedes, they said. Rain-related incidents were also reported in the neighbouring Thane district. A 73-year-old woman was injured when a slab of a protection wall on the third floor of ESIS hospital collapsed around 1 pm in Wagle Estate area of Thane city, said Avinash Sawant, the chief of the RDMC said.

“People of Assam are struggling against flood situation. I want to convey from this dais that Centre and Assam government are doing every thing to grant relief to flood affected people and victims,” said PM Modi.

'In Constant Touch With Officials & People of Assam': PM Modi on Flood Situation

“Assam is facing the challenges of floods. Normal life has been affected. Chief Minister Himanta and his team are working continuously on relief operations. I have been in constant touch with the officials and the people there,” said Prime Minister Narendra Modi during an event of Assamese newspaper via video-conferencing.

A newly elected village chief was killed while he was on his way to take oath and three people accompanying him were injured following a landslide triggered by heavy rains in Uttarakhand’s Tehri district today. The village chief Pratap Singh (50) and the three others — Arjun Singh (48) and Pushpa Devi (45) and her daughter Nitu (22) — were travelling on the Algad-Thattyud motor road in Jaunpur block when a boulder fell on their car at around 10 am. They were en route to Thattyud for the ceremony to take oath as the Gram Pradhan of Tator village, the officials in New Tehri said.

“During monsoon, incidents of landslides, floods and cloud bursts are reported in Himachal Pradesh. One such incident has just been reported from Kullu. Five people have been missing. The Revenue Minister would be taking stock of the situation,” Chief Minister Jairam Thakur told news agency ANI.

At least four people were missing and a bridge across River Parvati was damaged after flash floods triggered by a cloudburst at Manikaran in Himachal Pradesh’s Kullu district on Wednesday, officials said.

Kullu SDM said the cloud burst took place around 4 am and two places, including Malana nullah and Choj, Parvati valley were affected. Two houses were destroyed at a camping site in Choj. He said, four people have feared drowned while two are trapped.

In Malana, meanwhile, 25 people were rescued, while one woman drowned in Malana nullah. Himachal Pradesh CM has ordered all illegal camping sites in high-risk areas to be taken down, he said, adding that hundreds of tourists have been rescued from 3-4km spot.

Continuous heavy rainfall in Mumbai inundated several tracks and delayed trains in Mumbai, however, movement of trains was not stopped.

Shivaji M Sutar, Central Railway CPRO, said help of Railway Police has been taken for crowd management. “Our social media kept informing about late trains which helped public and us by controlling the crowd, he said.

“Due to rainfall several tracks had been inundated, trains were delayed but didn’t stop. Our teams work throughout the year for monsoon preparedness. We added additional pumps with higher capacities, micro tunneling helped,” he added.

3 injured in landslide in Mumbai's Sion

Three people were injured as part of a hill collapsed on Wednesday in Mumbai’s Sion area on Wednesday after continuous rains.

As per information, the landslide has been categorised Level-1 and took place in Nagoba chowk, Narayan Hadke chawl, Gorakhnath mandal, Chunabhatti, Sion.

Landslides have been reported near Pratapgarh fort in Maharashtra’s Satara district, no casualties reported.

Waterlogging was reported at 25 locations across Mumbai on Wednesday due to heavy rainfall. BEST buses have been diverted due to the waterlogging.

The National Disaster Response Force (NDRF) has deployed 17 teams in Maharashtra’s Konkan region for rescue operations that may be needed in view of heavy rains.

Out of the 17 teams, five are in Mumbai, two each in Ratnagiri, Raigad, Thane and Kolhapur, one each have been stationed in Palghar, Satara and Sindhudurg.

Visuals below: Rescuers in orange carrying out recce and taking stock of situation along the banks of Vashishthi river Bajar pool and Vashishthi diversion: 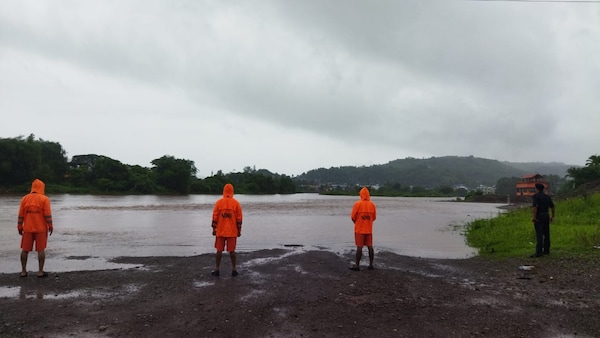 Badrinath highway blocked after landslides due to heavy rain

Badrinath highway in Uttarakhand has been blocked as debris due to heavy rains continues to fall near Sirobgad.

Rudraprayag, Uttarakhand | Badrinath Highway blocked as debris due to heavy rains continues to fall near Sirobgad. Its alternate route to Khankra Chhatikhal Srinagar road has also been closed. The Tilwara-Mayali-Ghansali road is closed at Pala Kurali. pic.twitter.com/9Y0CaZzS3T

A YSRCP MLA from Andhra Pradesh’s Nellore, Kotamreddy Sridhar Reddy, sat beside an overflowing drain in Umma Reddy Gunta with his legs dipped in it as a mark of protest against inaction by officials to clean it on Wednesday.

He said that despite requesting the officials several times to clean it, they didn’t listen to him.

#WATCH | Andhra Pradesh: YSRCP MLA from Nellore, Kotamreddy Sridhar Reddy sat beside an overflowing drain in Umma Reddy Gunta,with his legs dipped in it, as a mark of protest y’day

He said that despite requesting the officials several times to clean it, they didn’t listen to him pic.twitter.com/OAhgGcPlzI

In Bihar’s Bhagalpur, situated on the banks of Koshi river, Sinhkund village of Naugachhia town was flooded, forcing several people to leave their houses.

Bhagalpur, Bihar | Situated on the banks of Koshi river, Sinhkund village of Naugachhia town was flooded. Several were forced to leave their houses pic.twitter.com/aWeVj0L0Br

Thunderstorm with lightning and light to moderate rainfall at isolated places over Chandrapur, Gadchiroli Nagpur and Wardha districts of Vidarbha are expected today.

Waterlogging reported across Mumbai as rains continue to pound city

Reports of waterlogging have surfaced as Mumbai woke up to heavy rain on Wednesday. Waterlogging has been reported from Sion, Mankhrud railway bridge, affecting south-bound traffic movement.

Waterlogging has also been reported from Sea Link gate.

Other areas where waterlogging has been reported:

While most of Mumbai and suburbs are expected to receive moderate to heavy rain, there is possibility of “very heavy to extremely heavy” downpour at isolated places of the city today.

Maha: 12 Hamlets Cut Off After Bridge Gets Flooded in Palghar

'In Constant Touch With Officials & People of Assam': PM Modi on Flood Situation

Speaking to news agency ANI, Thakur said, “During monsoon, incidents of landslides, floods, and cloud bursts are reported in Himachal Pradesh. One such incident has just been reported from Kullu. Five people have been missing. The Revenue Minister would be taking stock of the situation.”

On the other hand, the India Meteorological Department (IMD) issued a heavy rainfall alert for Maharashtra today and the next two days, as state capital Mumbai continued to witness heavy downpour for the third consecutive day, resulting in a landslide near a chawl, water-logging at many places and traffic disruptions.

Three persons were injured in the landslide, an official said, as Mumbaikars continued to face hardship due to flooding on roads.

A landslide also occurred on a road leading to the Pratapgad Fort in western Maharashtra’s Satara district on Wednesday following heavy rains. There was no report of any casualty and no one was trapped in the debris, the Public Works Department’s executive engineer, Sanjay Sonawane, said.

IMD Director General Mrutunjay Mohapatra said an off-shore trough lies across the Gujarat and Maharashtra coast and low pressure over west Madhya Pradesh, resulting in heavy rainfall over Maharashtra and Gujarat. The IMD has issued a ‘red alert’ for south Konkan, Goa and south central Maharashtra from July 6-8. It said heavy to very heavy rainfall is very likely at a few places with extremely heavy rainfall at isolated places during this period. It issued an ‘orange alert’ for north Konkan.

Skymet, the private weather forecasting company, said active monsoon conditions will likely continue for the next 10 days due to the development of an intense low-pressure system. It said there could be extremely heavy rains in parts of Maharashtra, including Mumbai, and Gujarat on Thursday and Friday. Several parts of the state have been witnessing heavy rainfall since July 4. In many parts, rivers have been flowing near the danger mark and inundating low-lying areas. In Mumbai, a minor boy and two other persons were injured after a portion of a hill crashed on the two-storey Narayan Hadke Chawl (tenement) in the Chunabhatti area around 10.30 am, a civic official said.