On April 10, the female common crane called Vadla, after the village where it was first captured, started its northwards journey towards its wintering site. Exactly six months later Vadla returned to the same village.

On March 12, Wildlife biologists of the Wildlife Institute of India (WII) and foresters of the Gujarat Forest Department captured a common crane and attached a solar-powered GPS-GSM tag on it to track its movements during its flight to a breeding site in Central Asia.

On April 10, the female common crane called Vadla, after the village where it was first captured, started its northwards journey towards its wintering site. Exactly six months later, on October 10, Vadla returned to the same village near the Nal Sarovar bird sanctuary, one of India’s most important bird areas.

The crane’s journey of over 4,000 kms each way, reveals several fascinating insights about avian migration itself. After scientists attached a solar-powered GPS tag on the bird, it spent about a month near Nal Sarovar, foraging during the day for seeds and tubes. Later, during its northward migration, it travelled through Pakistan, Afghanistan, Iran, Turkmenistan, Uzbekistan and finally reached Kazakhstan near the Russian border.

Scientists helming the tracking project said that along with the details of the route it took, what was more important that the bird’s flyway and roosting sites were in good shape, allowing it to complete the journey. Conservation of flyways across borders is possible only due to international co-operation and this should not be taken for granted, scientists said. 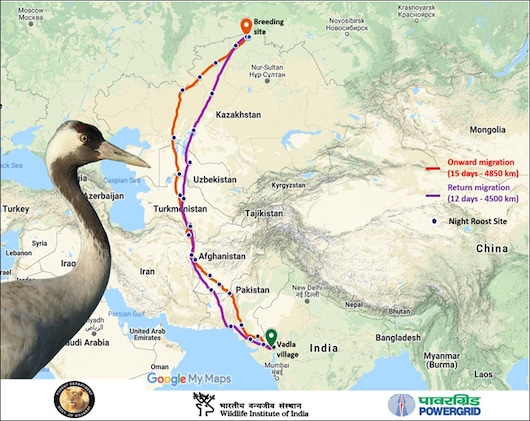 “Apart from the data on its migratory route and travel, the tracking study is important to understand the use of different landscapes by these migratory birds. It is important to note if their roosting sites are in good shape along the flyway. Unlike some terrestrial species, migratory birds cannot be conserved only if one country conserves its habitat. The conservation of the flyway and roosting areas has to be consistent across the borders. Else, it will affect their migration pattern,” said R.Suresh Kumar, Scientist, WII, Department of Endangered Species Management.

Kumar was alluding to the hunting of large-bodied avian species such as the Great Indian Bustard in Pakistan. WII has recorded instances where GPS tagged Bustards have entered Pakistan and their signal was lost, presumably after they were hunted.

This solar-powered GPS-GSM tag provides logged location information of the crane at programmed intervals. In this study, the information was received every 12 hours. In situations where there is no mobile network, the data is stored and transmitted when the crane flies into an area where the network is available.

What are flyways and why are they important?

Flyways are used by groups of migratory birds during their annual migration cycle, which includes breeding areas, stop-over areas or roosting sites and wintering areas. The Central Asian Flyway (CAF) is one of the most crucial flyways or migratory routes for birds and the Indian sub-continent makes up a major portion of the CAF. India is the winter home for 90% of bird species that are known to use this migratory and at 370 species of migratory birds from three flyways are reported to visit the Indian subcontinent, as per government data.

Suresh Kumar also pointed out that wintering cranes foraged in the flatlands looking for grass seeds and tubers and also in harvested agricultural fields for leftover grains. At night they congregate in thousands to roost at select wetlands there including Nal Sarovar bird sanctuary and adjoining areas. “This points to the importance of wetlands for roosting and more needs to be studied on this pattern,” he added.

Impact of power lines on cranes, bustards and flamingos

WII’s tracking study was part of a larger project on the impact of power lines on large-bodied birds. Common cranes, which number around 25,000-30,000, in Gujarat during winters, Flamingos and Great Indian Bustard are three large-bodied birds that face a threat from power lines. WII is trying to study the scale of mortality due to power lines and the impact this infrastructure has on the roosting and foraging patterns of these birds. The project is in collaboration with the Gujarat Forest Department and Power Grid Corporation of India.

“We are trying to identify potential threat areas, their movements, the extent of the threat posed by power lines to these birds, their flight behaviour. We are even trying to understand why they avoid certain areas,” said Kumar.