Mukherjee considered ‘13’ his lucky number, which is regarded as inauspicious by many. Interestingly, he was the 13th President of India and he lived for decades in a government bungalow numbered 13.

Words fall short while trying to describe Pranab Muherjee’s immense contribution in Indian politics and the innumerable sour, spicy and sweet memories of ‘Poltu da' – as he was fondly known among his friends and followers, especially at his home village Mirati in Bengal’s Birbhum district.

Mukherjee, who was admitted to the Army's Research and Referral Hospital in Delhi on August 10 and was operated for the removal of a clot in the brain the same day, died on Monday evening.

He was born on December 11, 1935, in the family of a freedom fighter, Kamada Kinkar Mukherjee in Mirati village. On July 13, 1957, Pranab Mukherjee married Suvra Mukherjee. She was born and raised in Narail, now in Bangladesh. She immigrated to Kolkata when she was 10 years old. She passed away on August 18, 2015.

From being a journalist with a local Bengali publication, named Desher Dak (Motherland’s Call) to a schoolteacher in a Birbhum college and then from a clerk in the office of the deputy accountant-general in Kolkata to the power of corridors during Indira Gandhi’s tenure in the national capital – Pranab da himself described his journey as, "I have seen vast, perhaps unbelievable, changes during the journey that has brought me from the flicker of a lamp in a small Bengal village to the chandeliers of Delhi." 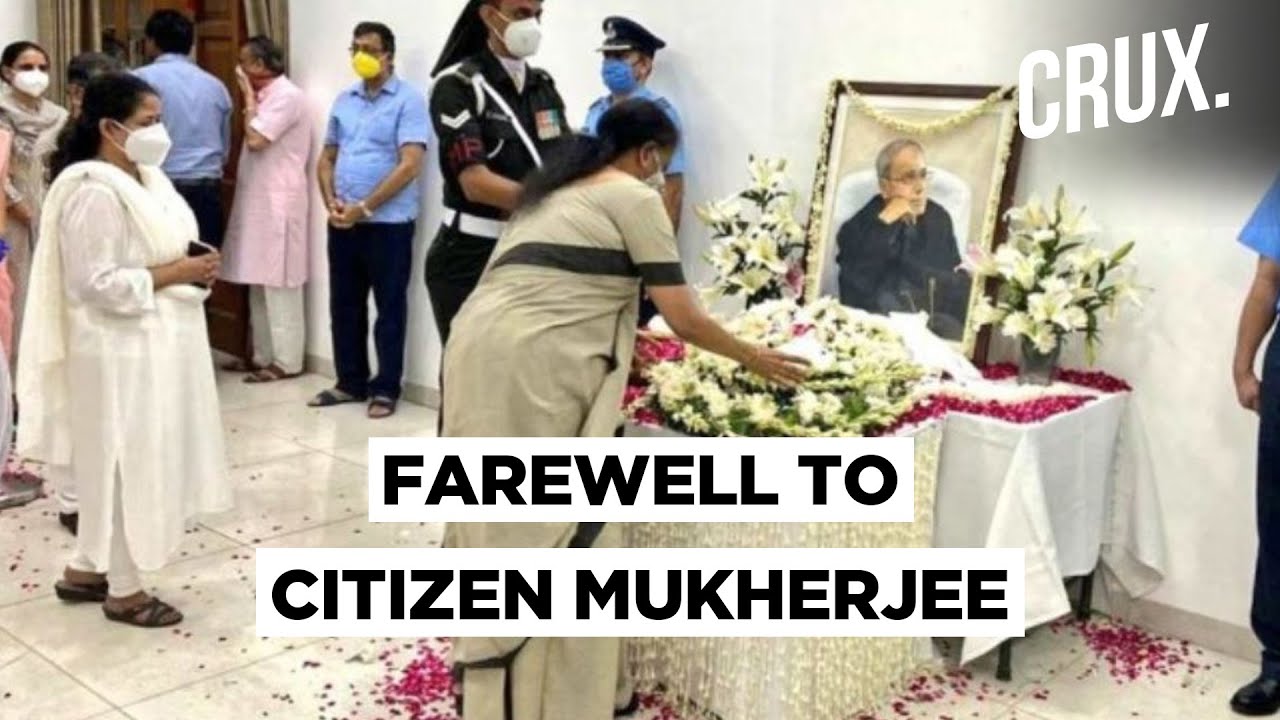 He was elected the 13th President of India on July 25, 2012 and remained in the position till 2017. With his vast political, financial and diplomatic experience, Indira Gandhi used to call him "a man of all seasons". He worked in the cabinets of Indira Gandhi, PV Narasimha Rao and Dr Manmohan Singh.

Far away in Kolkata, Trinamool Congress MP Sukhendu Sekhar Roy, who had a long association with Pranab da, termed him the "Kohinoor of Indian politics".

“I knew Pranab da for four decades. I met him for the first time in 1974 at veteran Ghani Khan Choudhury’s residence in Kolkata. At the time I was in Youth Congress and Ghani da was minister of irrigation and power and Pranab da was union minister of state, revenue and banking (independent charge). Since then Pranab da was very close to me and he used to love me a lot,” he said, while adding, he was "so gentle" and an "affable" person.

With his eloquence and power of oration, Mukherjee used to mesmerise people with his words and vast knowledge of subjects.

“In March 1977, during the Lok Sabha election, he made me the publicity in-charge. In those times there was no digital revolution and I hired a few local artists to make banners and cutouts. Unfortunately, he lost the election with a margin of nearly 26,000 votes. Thereafter, in 1978, panchayat elections were held and he came to Malda for campaigning. I used to accompany him and our bond became stronger as he stayed in Malda for a month. Then the Janata Dal government fell and in 1980 once again Lok Sabha elections were held. He contested from Bolpur but unfortunately due to the Left's strong inroads (in 1977 the CPM came to power in Bengal), he lost with a bigger margin in Bolpur too, by nearly 70,000 votes. The interesting thing to remember is he never used to get depressed. This was a learning experience for me to rise from failure,” Roy recalled.

“In the 1970s, when Pranab da was revenue minister, a few people were arrested under the Conservation of Foreign Exchange and Prevention of Smuggling Activities Act, 1974. Some of the arrested persons were also from Kolkata and Pranab da was aware of it. Then, Pranab da used to go for regular morning walks at Rabindra Sarobar in Kolkata. One day, he told me that a person at Rabindra Sarovar would give him angry looks and he was worried and scared about the matter. I told him that I will also go with him for a morning walk, and the next day I accompanied him. I saw a man staring at Pranab da and I told him not to worry. The next day, I came to Rabindra Sarobar alone, intercepted the man, and asked him why every day he stared at Pranab da. The man told me that he was the person Pranab da got arrested under the Conservation of Foreign Exchange and Prevention of Smuggling Activities Act. I told him that he acted as per law and asked him whether he wanted to meet Pranab da at his home. The businessman thought that I was a policeman and from the next day he stopped coming to Rabindra Sarobar for morning walks. When I told Pranab da, he laughed and heaved a sigh of relief,” said Roy

Sharing another scary incident, Roy recalled, “In 2009, Sonia Gandhi told Pranab da to visit for a party meet at Karbi Anglong in Assam. We landed (along with two other people) at Guwahati airport and from there we were supposed to fly to Karbi Anglong by helicopter. However, the pilot told us that only three people can fly. I told Pranab da to continue the journey and I would wait for him at the hotel. Pranab da left for Karbi Anglong and, instead of going to the hotel, I decided to visit the Kamakhya Devi temple. While I was finishing my prayers, I saw my driver frantically searching for me. He told me that Praban da was coming back and asked me to meet him at the airport. I got scared ... Why was he back so quickly? I met him at the airport and he was looking tense. Pranab da told me that he miraculously survived as the helicopter got trapped in an air pocket and was about to crash into a mountain. He also told me that the pilot was very experienced and somehow managed to fly it back to the airport, saving the lives of all those on board. That day we all were worried.”

Roy also reminisced about how Mukherjee used to love his record player and had a collection of Rabindra Sangeet. “But he didn’t know how to operate the record player. He used to ask me to put the disk of Rabindra Sangeet and always used to listen to one of his favourite songs – ‘Ei korechho bhaalo, nitthur hey, nitthur hey, ei korechho bhaalo (This hast thou done well, o ruthless, o ruthless, this hast thou done well)'. He used to listen more to this song when he was sidelined by Rajiv Gandhi. He loved songs of singers like Kanika Bandhyopadhyay, Suchitra Mitra and Hemanta Mukherjee. His favourite movie was Nayak of Satyajit Ray. His other favourite directors were Tapan Sinha and Mrinal Sen. He was not fond of the latest films, except Aamir Khan’s Rang De Basanti,” he said.

Last week, Roy had a telephonic conversation with Pranab Mukherjee. "He said, 'I am fine Sukhendu. I am spending time alone due to corona. I am meeting only my family members'," he recalled.

Pranab Mukherjee used to stay at 10 Rajaji Marg in New Delhi with his daughter Sharmistha whom he fondly used to call "Munni".

“Pranab da told me that he changed his walk timing from morning to evening due to monkey menace. He told me that there are a lot of monkeys in his residential area and he feared being attacked,” Roy said. He also looked back at how in the 1970s once he was forced to open a sweet shop as Mukherjee expressed a desire to have chhanar jilipi, a popular Bengali sweet.

“He was fond of fish curry and rice. Actually, he was more Bengali than an ordinary Bengali. Starting from his accent, food, ‘adda’ session – despite holding various crucial departments, ministries and despite travelling to so many countries, he never forgot his roots,” Roy said.

Pranab Mukherjee studied at the Suri Vidyasagar College in Birbhum and did his MA in political science and history. He also had an LLB degree from the department of law of the University of Calcutta.

In 1969, he joined the Bangla Congress headed by Ajoy Mukherjee and his work was noticed by the-then Prime Minister Indira Gandhi. The same year, for the first time he became a Rajya Sabha member on behalf of the Bangla Congress, which soon merged with the Congress. He was a five-term member of the Rajya Sabha.

In 2004, he contested the Lok Sabha polls for the first time and won from Jangipura constituency in West Bengal. He was re-elected from the same seat in 2009.

He was the blue-eyed boy of Indira Gandhi and in 1973-74 she made him the deputy minister for industrial development.

After Indira Gandhi was assassinated on October 31, 1984, Mukherjee’s political career suffered a setback as Raiv Gandhi did not induct him in his cabinet. Mukherjee resigned from the Congress and founded his own Rashtriya Samajwadi Party.

In 1991, when PV Narsimaha Rao took over as Prime Minister, after Rajiv Gandhi’s assassination, he invited Mukherjee to become the deputy chairman of the Planning Commission.

After that there was no looking back for Mukherjee as he earned the tag of "troubleshooter" in the party and was always involved in crucial policy matters. During his political career from 1969 (when he became a Rajya Sabha member) to 2012, he handled almost all crucial portfolios like external affairs, defence, finance, and commerce.

Interestingly, he was never given the charge of ministry of home affairs (MHA) – the reason is still unknown to most.

On August 10, 2020, he was put on ventilator support after undergoing surgery for removal of a clot in his brain. He also tested positive for Covid-19.

Mukherjee, 84, had tweeted, “On a visit to the hospital for a separate procedure, I have tested positive for Covid-19 today. I request the people who came in contact with me in the last week, to please self-isolate and get tested for Covid-19.”

He suffered a septic shock and died of a cardiac arrest at 4.30 pm on Monday.

Mukherjee considered ‘13’ his lucky number, which is regarded as inauspicious by many. Interestingly, he was the 13th President of India and he lived for decades in a government bungalow numbered 13.