On the day that a whimsical military court in Pakistan ordered the execution of Kulbhushan Jadhav, a former Navy officer, the Indian military establishment saved the lives of two Pakistani maritime commandos.

New Delhi: On the day that a military court in Pakistan ordered the execution of Kulbhushan Jadhav, a former Navy officer, the Indian military establishment saved the lives of two Pakistani maritime commandos.

According to the Coast Guard, on the 9th April at around 8.30 pm, the Maritime Rescue Coordination centre in Mumbai got a distress call from Karachi.

A speed boat of the Pakistani Maritime Security Agency (PMSA) had gone missing while on a routine patrol off the IMBL (International Maritime Boundary Line). Its last known position was 59 nautical miles West of Jakhau. The fear was that it had drifted into Indian waters.

The rule of the Sea is simple. The utmost priority is to save a life, procedures can follow later. True to that spirit the Indian Coast Guard was put on high alert.

Three ships patrolling the area including ICGS Ankit, ICGS Samrat and ICGS Arinjay were diverted for search and rescue operations. A Dornier patrol aircraft and an advanced light helicopter later joined in to undertake sea and air coordinated searches in Indian waters.

The Pakistani side also deployed three ships and two helicopters in their waters. 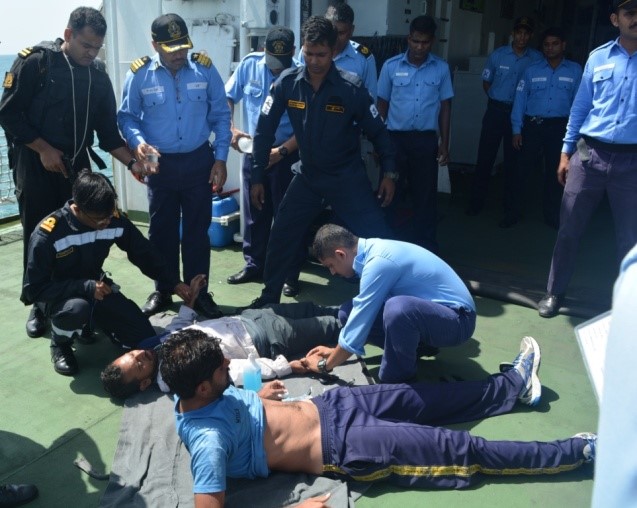 The Indian team roughly knew what they were looking for. A white rigid inflatable boat with orange stripes and six Pakistani maritime commandos on board.

The next day on 10th of April, roughly at the time that the Pakistani Army Chief General Qamar Bajwa was signing on Kulbhushan Jadhav's execution order, an Indian fishing boat spotted the Pakistani boat and rushed to its rescue.

Of six men on board, four had drowned. But they managed to rescue two survivors. Their condition was fast deteriorating due to prolonged exposure to the sun. The fishermen contacted the Coast Guard over the VHF and subsequently handed the Pakistani commandos to them for medical attention.

The Indian effort didn't end there. Two coast guard ships continued to look for the bodies of the four Pakistanis, three were recovered and handed over to the PSMA.

They said three boats of the PMSA had rounded up seven Indian fishing trawlers near the IMBL. While escorting them to the Karachi Port, one of the trawlers rammed the Pakistani boat that capsized on impact.

The Indian fishermen then saved two Pakistani commandos and immediately contacted the Coast Guard. ICG Arinjay sailed in with medical help. The two commandos and three bodies recovered were handed over to Pakistan this morning. As a goodwill gesture, Pakistan released all 62 fishermen they had rounded up.

Whichever version you believe, one thing is clear. India helped save two Pakistani lives mid sea. It is now Pakistan's turn to return the favour.